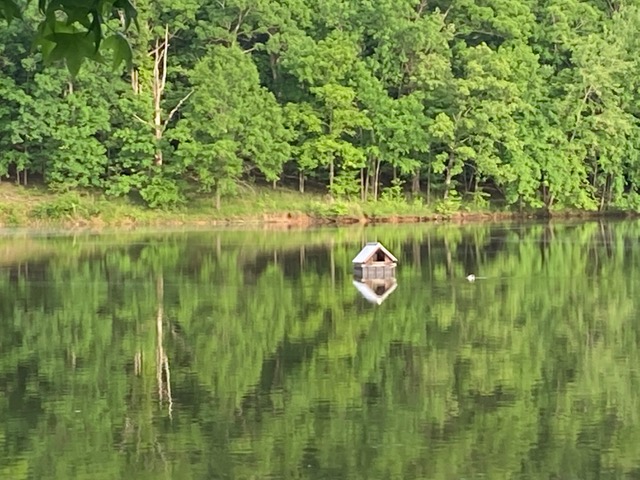 Somehow "Texas Notes" didn't seem to suit this week's report from former Austin bureau chief Caren Jeskey, just days now from her new home. So an adjustment seemed in order. Times change, and we change with them.
Paducah Kentucky, where the Tennessee and Ohio Rivers converge, has been my home for a week now. Each state I travel through has its own special tone. Kentucky folk seems a bit less prideful than Texans and a bit less laissez faire than Arkansans. They say hello with an unreadable look on their faces indicating “you will say hi to me because we speak to each other here, but I am not going to be too excited about it.” In Arkansas, they ignore you
While sitting at an outdoor restaurant earlier this week, Harleys and hotrods sharply pieced and jabbed at the silence the patrons were trying to enjoy. The lady at the next table and I looked at each other and shook our heads, and I exclaimed “Whyyyyyy??” When I realized I was not going to win this one, that they were going to keep going on and on revving their engines while we ate their dust I decided to try to join them. I told the lady “I am going to try to enjoy the sound.” She asked if I was joking. I was not, since what’s the point of fighting against the unavoidable? I mean, I could have left and it was my choice to stay.
One of the culprits was a diner in our midst. He and his girlfriend rolled up on a motorcycle, leather vests and all. He backed the bike into a spot and they jumped off. The noise level was moderate when they arrived. But then the performance commenced. He sauntered back out to the bike and hopped on. As he rode off — I'm guessing to get cigarettes — he revved the engine and the hair on the back of my neck stood up. Lovely. Thanks dude. I wasn't not in acceptance. I shook it off and tried to focus on the beautiful sunset.
When he came back it was a little less dramatic. He got off the bike and I watched his slight frame, which was weighed down by leather, huge goggles propped up on his forehead, and steel toed riding boots. He looked small and unsure under all the regalia. His girlfriend jumped up to open the gate for him.
I decided I had to talk to them. On my way out he was sitting alone, partner off to the restroom. I said “I am really curious to know what you think about making all that noise with your bike? Does it bother you that it bothers others?” “Not at all!” he said, with a smirk. His girlfriend came and sat back down, also looking amused. They excitedly launched into explaining things to me. “Loud music and loud bikes make us happy, just like peace makes you happy.” That stopped me in my tracks. Nick continued. “I grew up in Joliet [Illinois] and bikes were all around me. I know 80 year olds who still love to ride loud Harleys.” Alli jumped in to share how much she loves loud bikes too. They also shared a bit about how hard it is to raise six kids and find ways to enjoy life.
I saw them differently after that. Instead of the plebeians who were assaulting me with their fumes, they were a young couple, working hard to support their family, and using the only kind of escape in their repertoire. Sure, I wish they had more to chose from such as Aida and The Art Institute— but they don’t. Who am I to judge? I used to keep earplugs with me at all times to dull the sounds of the screeching subway trains or the loud music coming out of headphones all around me when I lived in Chicago. Seems wise to keep them with me in rural America too.
I won’t tell you that Nick said he likes “that the noise aggravates people” since I kind of want you to like him, and also because he tried to backpedal from the statement when he realized that it did not sound good. I saw a flicker of wise discernment cross his face.
I have many more Paducah folks stories but will leave you with my favorite one. While I sat on a restaurant patio with the manager of a local eyeglass shop who told me that he and his wife “are not crunchy but we knock on the door of it a lot” (meaning they are open to whole grains and some good down home health nut stuff), a tattooed man with sparkling eyes sat down to join us. He was raised Southern Baptist here in Kentucky, and found himself in trouble a lot as a kid.
“They called the preacher in on me. He told me I have to have faith. But I wanted the facts.” 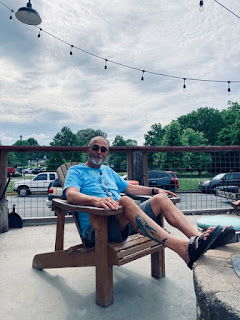 After 33 years working in a factory he realized he needed something more. “In a meditation I went to that much higher level of consciousness and I met God. God is not a white guy in white robes but he’s a giant orb of energy.” This man, David Dean, now offers massage therapy and Reiki healing He sees himself as a channel of good energy.
The funny thing is I’d looked him up earlier and the only reason I did not call him for a massage is that I prefer female therapists. I set something up with a woman but when I got there today I noticed she did not follow the COVID protocol outlined on her website. In our meet and greet I told her I am vaccinated and she let me know that she is not, does not trust the vaccine and will not be getting it. I told her that I’d have to cancel the massage; it’s the home stretch! I will be hugging my family and beloved friends in less than 48 hours from now and I’ll be darned if I am going to consort with an anti-vaxxer this state of the game. See y’all soon!
Posted by Neil Steinberg at 12:00 AM