But does it have to be as lovely as a tree? 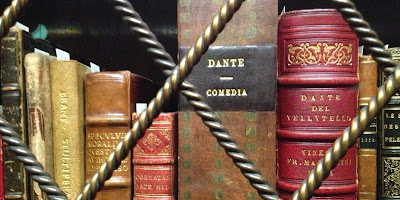 I like poetry. The Poetry Foundation, well, I try to like them too. It can be hard, because they're a foundation, and something about foundations is antithetical to the poetic spirit, the way that the Rock and Roll Hall of Fame in Cleveland doesn't embody rock and roll so much as entomb it. They do try to get poetry out there, though I wish they made more of an effort to occasionally have some kind of edge; buy a round of drinks at the Poetry Slam, something. Still, I like to keep tabs on them. They're good at heart. I didn't plan on touting their favorite poem er, "event"—I just stopped by to meet the new boss, Robert Polito. But the favorite poem thingy hasn't been announced yet —you read it here first, folks! —so I thought I would ballyhoo the con... whoops, something-close-to-but-not-quite-a-contest. (Isn't that the problem in a nutshell? That they won't call their contest a "contest." Too much foundation and not enough poetry). Then I got hung up on the fact that they're asking people to make the effort to write about their favorite poems, but aren't giving any prizes, other than to appear in their video. Any local saloon would dig up prizes. It seemed chintzy.

If you asked me to name my favorite poet, I’d be hard-pressed. I mean, yes, I keep trotting out Dante, but the dour Florentine can be heavy lifting. I’d hate to be forced to balance my affection for him against, say, Walt Whitman, lustily grabbing the reader around the neck with one hand and drawing him close, while the other hand — well, ahem, never you mind.

But could I pick Whitman over Mary Oliver? Willow leaves in her hair, swallows fluttering around her head like a Disney heroine? A poem of hers in your pocket is like an aluminum bottle of cold water jiggling on your belt as you set out on a hike in the forest. You’re glad it’s there and even gladder when you pause to take a long, soul-satisfying pull.
Does she really trump Rilke? Or Virgil? Or John Berryman, addressing the Lord? “I fell back in love with you, Father, for two reasons: / You were good to me, & a delicious author...”
No matter. The Poetry Foundation isn’t even asking for your favorite poet — that would be hard enough. They’re asking for your favorite poem, in the about-to-be-announced Favorite Poem Contest: Chicago, reviving the contest that Robert Pinsky held when he was America’s Poet Laureate.
Is that even possible? "Favorite" has to be time specific. Favorite now. Favorite at the moment. For a long time my favorite poem was Robert Browning's "Andrea del Sarto," the ambling, melancholy justification of a painter who was merely excellent, rationalizing why he wasn't a Michelangelo. " Ah, but a man's reach should exceed his grasp, / Or what's a heaven for?"
But did I like that better than Robert Frost's "The Death of the Hired Man," a novel compressed in a few pages, with lines never to be forgotten: "Home is where, when you have to go there, they have to take you in."
I learned about the contest after stopping by the Poetry Foundation's spare, elegant West Superior clubhouse to meet its new president, poet and scholar Robert Polito. He took exception to my suggestion that poetry squats on the outer margins of our culture.
"It's hard to say exactly where poetry is," he said. "It would seem a lot of people would say it's on the periphery, it used to be more important. In a lot of ways, there's never been a better moment to be a poet and to be a reader of poetry than right now."
He cited the explosion of small presses, local poetry scenes and books of poetry.
"There's an enormous amount of poetry in the culture," he said.
Further boosting poetry into the mainstream, from Oct. 15 through Nov. 15, the foundation is inviting Chicagoans from all walks of life to write about a poem they love and why they love it.
Five entries will be chosen to participate in a video that will debut on the foundation website in January. And that's it — no prizes, as this is not a contest, for reasons I'm sure are dull and unpoetic and involve lawyers. (I did try my best. "C'mon," I told them. "You gotta have prizes. A coffee cup, a T-shirt. Something.")
Still, entering isn't difficult. In fact, I'll go first. My favorite poem is ... "Leaves of Grass." It has to be, Whitman's bold, brilliant, timeless ode to the bounty and promise of America. Particularly the part where Whitman, who spent the Civil War as a nurse tending wounded soldiers, ministers to the reader.
"O despairer, here is my neck," he says, practically leaning over your bed. "By God! You shall not go down! Hang your whole weight upon me."
Whitman nearly clamps his lips over yours, filling your lungs with air.
"I dilate you with tremendous breath ... I buoy you up; Every room of the house do I fill with an armed force ... lovers of me, bafflers of the graves; Sleep! I and they keep guard all night."
I always smile at Uncle Walt and his motley band of mid-19th century inverts, in their floppy Jed Clampett hats frayed and homespun, toting Sharps rifles, taking up strategic spots around my house, dutiful midnight sentries. He wrote it to strengthen, and it does, every time.
That's mine. What's your favorite poem? Don't tell me; tell the foundation, starting Oct. 15: poetryfoundation.org. Good luck.