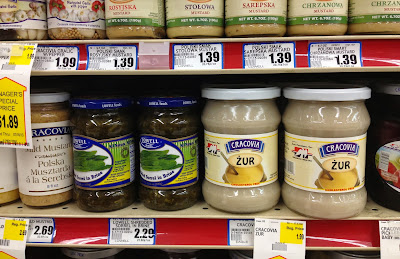 Long before Dominick's announced it is bowing out of the Chicago market, it seemed like the stores had faded from view. My wife is constantly visiting a litany of supermarkets—Sunset, Garden Fresh, Trader's Joe's, almost every store around BUT Dominick's (and, I suppose, Whole Foods, which is just too damn expensive for normal folk). But there's always a certain touch of sadness to see a local icon fade:


The Jewel won.
To Chicagoans of a certain stripe, there were only two supermarkets: Jewel and Dominick’s, the Coke and Pepsi of the grocery wars, each chain claiming about a third of the grocery market. The food retail business has changed dramatically since those days, with all sorts of new players coming (and going), and now that parent Safeway has announced it is pulling its Dominick’s stores out of the Chicago market, this is a moment for looking behind as well as looking ahead.
You were either a Dominick’s shopper or a Jewel shopper — this being Chicago, loyalties ran deep. Jewel was Coke — a little pricier, a little classier. Dominick’s was Pepsi — more of a bargain. At least to the memory of some Chicagoans; to others, it was the opposite, with Dominick’s a little classier, Jewel a little more down-home and friendly. And to still others, it hardly mattered.

“They were more similar than different,” said Greg Cameron, of Hanover Park.
It isn’t difficult to understand where Dominick’s went wrong.
“They’ve lost a lot of market share,”said David J. Livingston, of DJL Research, a Milwaukee supermarket analysis firm, “mostly to Wal-Mart, Meijer, Mariano’s, Trader Joe’s, Whole Foods, Tony’s, Fresh Farms, Super H, a number of strong independents.”
Why couldn’t Dominick’s keep up with the newcomers?
"They didn't change," Livingston said. "They were like supermarket museums from the 1980s and 1990s. They never really changed. They've been declining for many years."
Safeway's ownership only made it worse.
"Accountants seemed to be making all the decisions, rather than grocers," said Livingston. "They were running California stores in Chicago. They took out local products that people were used to buying and replaced them with Safeway products, and it just didn't go over."
But one company's failure is another's opportunity.
"Of the 72 stores, not all of them are losers," he said. "Some of your best operators in Chicago are just dying to get their hands on these locations. So the consumer will probably really benefit from this."
That's something to keep in mind. Because otherwise, it might seem like another nostalgic moment, another part of Chicago history fading away, joining lost rivalries like Field's vs. Carson's, or Quigley North vs. Quigley South. At least we still have Cubs vs. Sox, as well as Sun-Times vs. Tribune. Some things never change, or at least haven't — yet.
Posted by Neil Steinberg at 12:00 AM