Or is she just a big gal in a spiky hat? 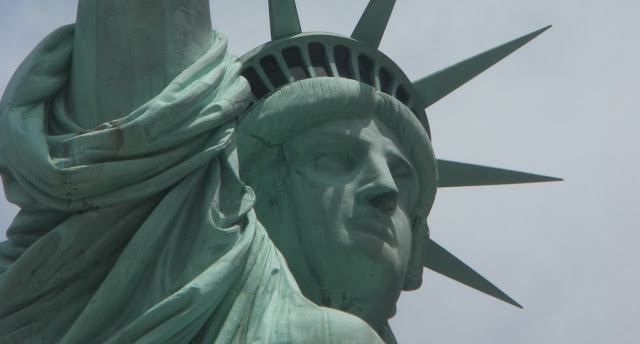 The dedication of the Statue of Liberty, on Oct. 28, 1886, was a loud affair, with blaring brass bands, cheering crowds, clanging bells, the vigorous tooting of steam whistles and occasional cannonades from of the flotilla of naval vessels and private boats that had journeyed to Bedloe's Island to witness the dedication of what is still the tallest metal sculpture ever built.
After the French flag was pulled from the the face of "Liberty Enlightening the World" as she is officially called, a "full fifteen minutes" of cacophony ensued, while President Grover Cleveland stood by, grinning awkwardly, waiting to speak.
His remarks were bracingly brief, particularly compared to the endless oration delivered by the famously-prolix New York politician Chauncy Depew.
The president said something surprising. 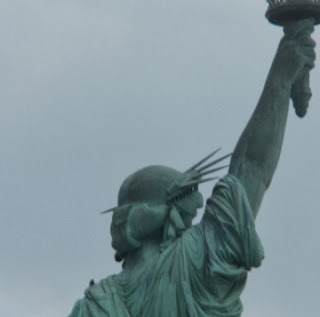 "We are not here today to bow before the representation of a fierce and war-like god, filled with wrath and vengeance," Cleveland said. "But we joyously contemplate instead our own deity keeping watch and ward before the open gates of America."
No politician would dare utter the phrase "open gates of America" today; even Democrats scramble to outdo each other welding those gates shut. For a nation of immigrants, we have grown alarmingly xenophobic, the sons and grandsons of those who came to these shores, in sad-but-typical pattern, often issuing the loudest calls for the most recent crop of immigrants to be barred, blocked, sent back.
The original purpose of the statue was to celebrate a century of U.S./French friendship, but even as the ceremony unfolded, it was being repurposed.
French ambassador W. A. LeFaivre said the statue "affirms human dignity."
"The republics of the past were debased by hostility to foreigners," he said. "Even in the modern world, liberty was during long ages the monopoly of privileged castes or races."
Haven't quite put that hostility behind us, even 127 years later.
In those long ago days before the 20th century's global butchery murdered optimism, the statue was seen as evidence of humanity's steady march toward perfection, "the triumph of reason and of justice over the material dominion," as LeFaivre put it. "It means, in brief, the extinction of bloody struggles and the union of all peoples , through the study of science the respect of the law, and sympathy for the weak."
Not quite. "Sympathy for the weak," another phrase not heard much at political gatherings of any stripe. Shameful to see it uttered so easily by our Golden Age ancestors. And maybe it was hypocrisy, spoken at a time when children worked in thread factories, when women couldn't vote, when bigotry didn't even know enough to be ashamed.
But at least they said the words. We've made progress, yes, but also seem to have lost the polestar of lofty ideals. We're so busy trying to regain the past we can hardly imagine a future.
On the program that day was a piece of tripe by John Greenleaf Whittier ("The land, that, from the rule of kings/In freeing us, itself made free/Our Old World Sister, to us brings/Her sculptured Dream of Liberty:")
A better poem, "The New Colossus," had already been written, three years earlier by Emma Lazarus. She was a Jewish poet, alarmed by Russian pograms, who had recently awakened to the importance of immigration to her people. She was solicited in 1883 to write something to donate to a fundraiser for the base (Congress, tight then and now, refused to appropriate the $300,000 needed to build the statue's pedestal, so the media, history take note, stepped in to fill the void, led by Joseph Pulitzer, mobilizing readers, ordinary Americans, often children, to send in their pennies and nickels and dimes).
Lazarus's poem reads:


Not like the brazen giant of Greek fame,
With conquering limbs astride from land to land;
Here at our sea-washed, sunset gates shall stand
A mighty woman with a torch, whose flame
Is the imprisoned lightning, and her name
Mother of Exiles. From her beacon-hand
Glows world-wide welcome; her mild eyes command
The air-bridged harbor that twin cities frame.
"Keep, ancient lands, your storied pomp!" cries she
With silent lips. "Give me your tired, your poor,
Your huddled masses yearning to breathe free,
The wretched refuse of your teeming shore.
Send these, the homeless, tempest-tost to me,
I lift my lamp beside the golden door!

The "twin cities" were New York and Brooklyn, then separate municipalities.
Looking at the statue, it seems solid but it's not. The copper skin is 2.5 millimeters thick -- .09 inches, thinner than two pennies placed together. Like the idea it represents, it gives the illusion of solidity, but its actually very fragile, and requires support. The copper skin is spread over a superstructure of iron, at first, now steel after refurbishing.
Particularly now. The Statue of Liberty's symbolic function has been sapped by years of expropriation, in everything from "Ghostbusters II" to kitschy New York souvenirs. We're forgotten her ideals, and Lady Liberty could use an infusion of respect and wonder that has dribbled away over time.
Although, that's not so new either. Originally the torch glowed, and the statue, the tallest structure in New York City between the time of its dedication to when the Empire State Building topped out 43 years later, was considered, not just a present from France, not just a celebration of freedom, but an aid to navigation. The original congressional resolution setting aside Bedloe's island for its use also maintains the statue's "future maintenance as a beacon." Originally, the Statue of Liberty was administered by the Lighthouse Board and, later, the U.S. Army, since it had a base, Fort Hood, on the island. Liberty in the hands of the army — now there's a concept.
And a reminder that liberty -- as a statue, as an idea -- requires effort to maintain.  Freedom, as the vets like to say, is not free. The Statue of Liberty isn't glorious because she is really big.  Even its sculptor, Frederic Auguste Bartholdi, saw that.
"It ought to produce an emotion in the breast of the spectator, not because of its volume," he wrote in 1884, while the statue was still in 210 crates and heading to America, "but because of its size in keeping with the idea that it interprets, and with the place which it ought to occupy."
Big ideas required big statues, back then. Now ... I'm not even sure we have the national will to talk about our shared beliefs any more. What would those ideals be and what kind of statute would represent them? What would it look like? And how would we feel if we saw the statue that truly represented our convictions of today? It would be a whole lot smaller, that's for sure.