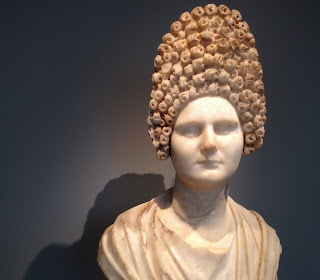 Sympathy is in short supply and it must be rationed, apparently. So when Columbus Day comes around, lately all we can seem to do is reflect on the undeniable barbarity of Columbus toward the indigenous people he found here, and shrug off the prejudice that Italians faced coming to America, which compelled them to form the holiday in the first place. Which strikes me as wrong. Why should history be divided so neatly into the good and the bad, when there is pity — and blame — enough for all? Since some journalists — no names please! — make such a point of repeatedly rolling in tales of the Mafia and Italian-American criminality, I thought, Monday being Columbus day, it might be a good idea, if only as a change of pace, for the briefest nod at a few of the Chicagoans of Italian extraction who weren't Al Capone or his descendants:

Giuseppe Giacosa was a playwright who turned to writing opera librettos, penning three Puccini classics — La Boheme, Madam Butterfly and Tosca — before he died at age 49.
He also traveled and wrote a book, “Impressioni d’America,” visiting Chicago just before the World’s Columbian Exhibition . He was taken, as all visitors were, by the industry, “enormous factories, interminable streets, amazing shops, deafening sounds.”
And by the smoke.
“I did not see in Chicago anything but darkness: smoke, clouds, dirt,” he wrote, noticing something unusual for sale, “in many shop windows certain apparatus for covering the nose, a kind of nasal protector, or false nostrils.”
Chicago is a city that has hosted one wildly overpublicized Italian-American resident — Al Capone — and millions who are underrecognized, from those who spent their entire lives here, to visitors such as Giacosa, who stayed for a week.
With October being Italian Heritage Month and the Columbus Day Parade on Monday, this seems an apt moment to look at a few of those overlooked Italians.
Driven from Italy by the extreme poverty there, immigrants to Chicago found the same waiting for them here and had to take the most menial jobs to try to escape it: "street sweepers and pavers, railroad workers . . . bootblacks, barbers, and scissors-grinders" according to historian Bessie Louise Pierce. "Later they might attain the envied status of small merchants and fruit peddlers or seek jobs in the factories."
They faced such prejudice that L'Italia, Chicago's Italian-language newspaper, published lists of restaurants and hotels they could patronize. Oscar Durante, its vigorous editor, pushed his compatriots to "Americanize" and had a policy where the newspaper would provide any reader an escort to Chicago's naturalization office and pay the 50 cent registration fee.
Not all were fruit sellers. The founder of the Chicago Pasteur Institute at the Rush Medical College was Dr. Antonio Lagorio, Chicago-born son of Genoese immigrants. Chicago's Italians became successful real estate brokers and restaurateurs, first for their own community and then for a city that grew to love their fare. It's a tradition continued to this day by the likes of Phil Stefani, Joe Mondelli, Steve Lombardo at Gibson's. Tony Durpetti at Gene & Georgetti, the Capitanini family at Italian Village, which Alfredo Capitanini opened in 1927.
But those are well-known names, and the majority of Chicago's community was unsung.
"Anonymous heroes of our past who built buildings with the sinew and muscle helped build the great Chicago scene," said Dominic DiFrisco, president emeritus of the Joint Civic Committee of Italian Americans. "Laborers, bricklayers, especially ornamental plasterers of the magnificent theaters in Chicago — 90 percent were Italian. The Italian people enriched and illuminated Chicago in so many ways with labor and intelligence. We're great Americans, yet we continue to honor the past given to us by incredibly courageous people."
One Italian-American typically overlooked is Florence Scala, who stayed put and fought for her home when most of the Taylor Street Little Italy was being bulldozed in the 1960s for the University of Illinois at Chicago campus.
It gave her a conflicted view of Chicago, similar to Giacosa's. She told Studs Terkel in Division Street: America that "I've always loved the city . . . I love it and hate it every day. I hate that so much of it is ugly. . . . I hate the fact that so much of it is inhuman in the way we don't pay attention to each other." But mostly she loved it, just as her father did, who came here from Italy and lived to be 98.
"He never went back to Italy," Scala said. "He didn't want to. He'd say, 'This is my country, America.' "
Photo: sculpture of an early Roman, The Art Institute of Chicago. 10/12/13.
Posted by Neil Steinberg at 12:00 AM