Birds, squirrels and the trouble in Israel 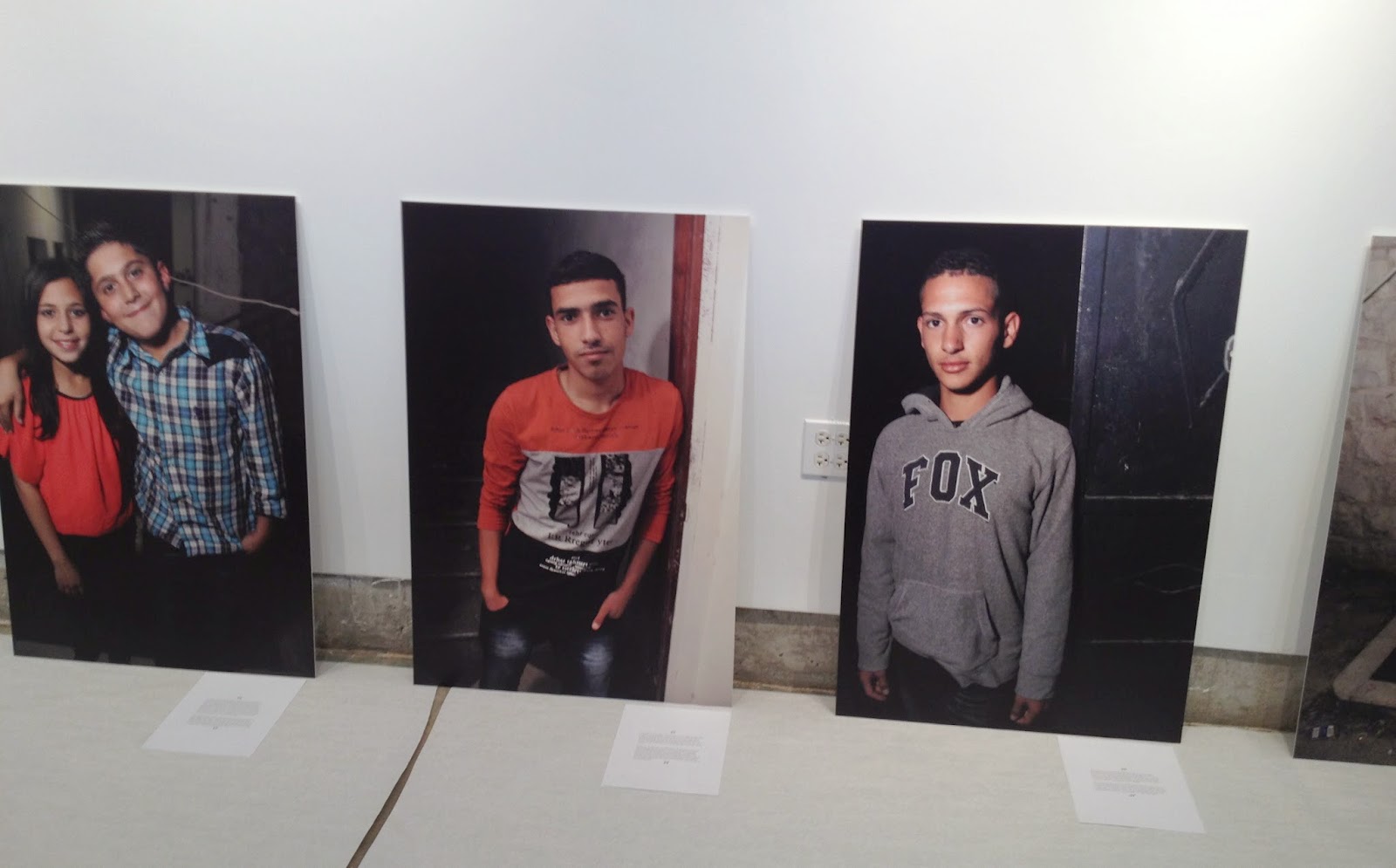 Today's column has an unusual backstory. My former colleague at the Sun-Times, Rich Cahan, once a photo editor, now a busy publisher of books of historic photography, emailed me Monday to say that Wednesday his show of portraits taken in the West Bank opens in River North.
Suppressing my immediate reaction—"kinda short notice, huh?"—I told him sure, I'd be happy to meet him as he set up the exhibit at The Art Works Projects studio, an attractive little gallery tucked in the shadow of the expressway at 625 N. Kingsbury.
Rich spent a week in the occupied territories last year, and took the portraits in the show on his final night, basically by knocking on doors and asking whoever answered if he could take their picture.
In one sense, they are unexceptional photos of ordinary people. Though in the context of the Israeli/Palestinian crisis, ordinary people, who are neither soldiers nor protestors, leaders nor spokespeople, perpetrators nor victims, are exactly the individuals who are least noticed or heard.
Rich was obviously moved by what he had found during his stay, and focused on one aspect: raids by the Israeli military at night, because, he said, "it was as much as I could physically comprehend, night raids."
We talked about the dilemma of being an American Jew, wanting to support Israel, but being uncertain where, if anywhere, the current Israeli policy is going. I told him that I try to begin slowly when attempting to converse with my unwaveringly what-Israel-does-is-by-definition-right friends, starting with something like, "The Palestinians, they're people too, right?" but even that tack usually doesn't get me far.
Passions are high on this here as well as there. Rich went on the trip with 10 others, including Brant Rosen, the controversial Evanston rabbi who had to leave his congregation this year due to conflict over his impassioned support of the Palestinian cause. Myself, I find blindly boosting the Palestinians is as unsupportable as reflexively backing the Israelis. There's plenty of blame to go around. 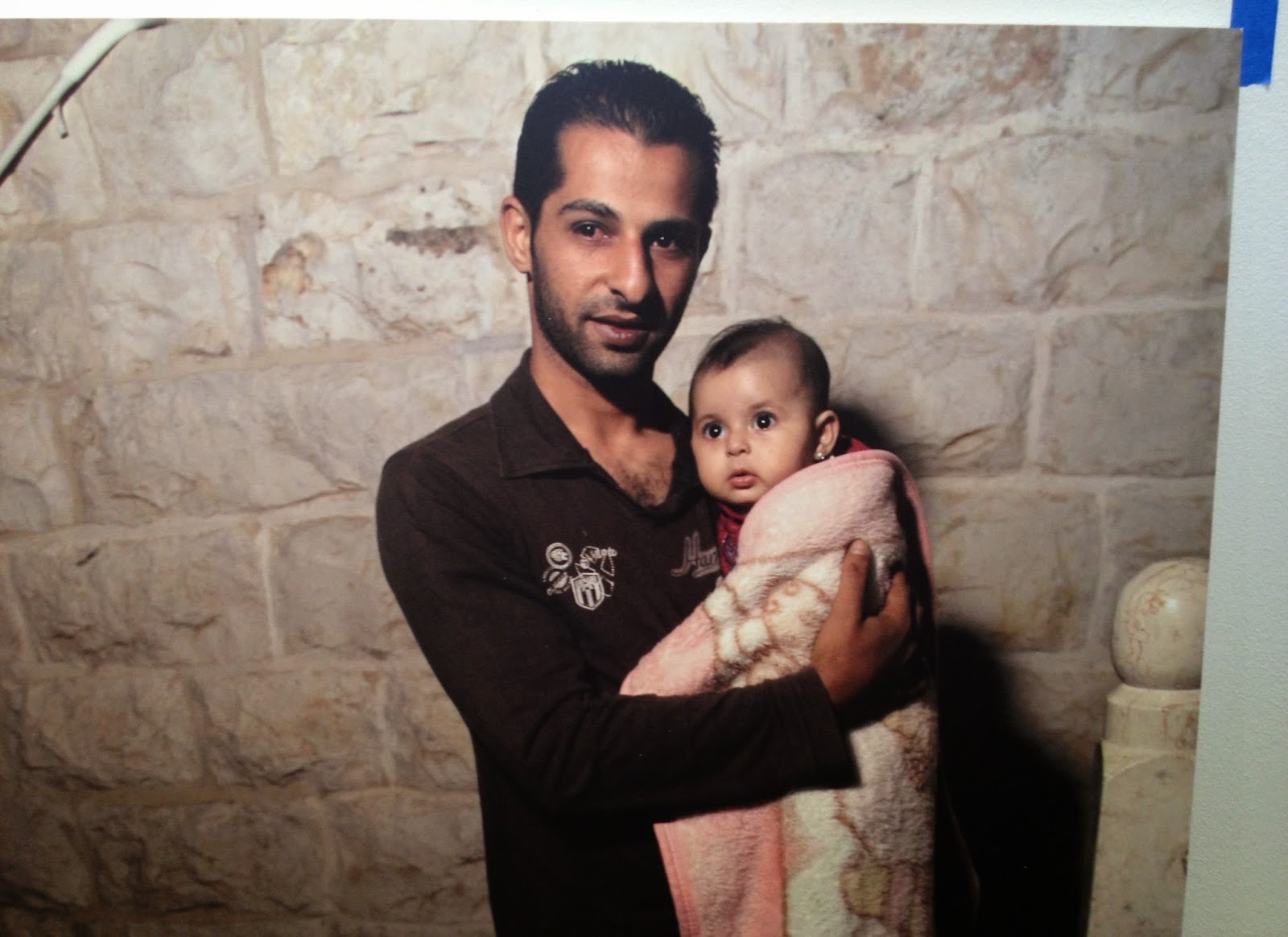 "We travelled all over," Rich said, "but spent most of our time in Bil'in"—a small town of about 1,800 people that gained notoriety because of its residents' resistance to Israel's security wall.
"Because I took it in this town, there are people who say that gives it a particular political statement," he said. "But it could have been any town in the West Bank."
I asked him if he was worried people will view him as a tool.
"I don't know who I'm a tool of," he said. I also wondered whether, being Jewish, he had been scared spending a week in the West Bank. He said he certainly felt threatened, but not by Palestinians.
"We did fear the IDF," he said, using the initials of the Israeli Army. "Our group was tear-gassed three times."
Cahan's show "Night Raid in Bil'in" opens Wednesday, Nov. 19—there is a reception from 6:25 p.m. to 8 p.m. at the gallery at 625 N. Kingbury. It runs for a month, though the gallery keeps irregular hours, so you need an appointment to get in, though there are several scheduled events you can learn about on their web site. It is part of a program called "Occupied Territories/Contested Lands; Part 1," which strives for an encouraging, and rare, balance: another installation focuses on the difficulties Israelis face—there are photos of families gathered outside their rocket shelters, for instance.
I've never had anyone adequately explain to me why supporting Israel demands that I deny the humanity of the Palestinians, or how recognizing their tragic situation somehow is a betrayal of my own heritage. In my view, being Jewish, if it is to mean anything beyond blind team loyalty, demands it.
The column below was written Tuesday morning, while waiting to go to the gallery. I wrote it as a placer column—in case I got hit by a bus on the walk over, and assuming I'd scrap it after I talked to Rich and plug what I learned there into it.
But I decided to keep it as is.


Let’s see if we can solve the Israeli/Palestinian problem right now, shall we?
The Palestinians want Israel, their former home, to be their home again. While waiting, they dwell in misery in the occupied territories, passing the time by lobbing rockets and committing various atrocities, like Tuesday’s slaughter of four Jews in a Jerusalem synagogue. They call it self-defense.
The Israelis, meanwhile, aren’t about to give up their land to the Palestinians and are content to keep them under guard — not without reason, given the facts outlined above—responding to their attacks with devastating force. Meanwhile, the years click by and the Israelis, not realizing it, grow nearly as divided, angry and extreme as their enemies, as David Remnick grimly describes in a recent New Yorker.
Have I plainly stated the situation? Good. Now, on to the solution.
The Palestinians could have their state, but not the state they want. And the Israelis could allow the Palestinians back into their country, but then it wouldn’t be a Jewish country. Plus there’s no reason to think Palestinians would give up the killing that has been their central mode of self-expression.
The solution, therefore, clearly is ... umm.
This direct approach isn’t working.
Let’s try a metaphor. Maybe that’ll help.
I love birds, and for the usual reasons. They fly. They sing. They’re beautiful.
I hit upon the strategy of attracting birds by feeding them, and I stuck a wrought-iron pole in the backyard, hung a feeder off it, kept it stocked with seed. It worked. Blue jays and red-winged blackbirds, yellow swallows and brown robins flock to it, to my joy.
And squirrels.
The squirrels ruin everything. I hate squirrels. They dart. They twitch. They have, in the past, attacked my home, in the city, trying to chew through the accordion slide next to a window air conditioner, my wife shrieking while I mobilized to our defense.
Squirrels have the run of my backyard. They are interlopers and don't belong. I'm willing to cede the trees to them; what choice is there? But I've tried to keep them off the feeder. That's the birds' food they're gobbling up. At first greasing the iron pole worked - not so much making them slide, as they're loath to get coated in the stuff.
But the grease weathers away and is overcome by the squirrel onslaught. Before I know it the iron pole is thick with fur, and the squirrels are gobbling the seed again. They chewed apart my previous feeder, so I bought a sturdier, caged model. I've tried a wide, anti-squirrel baffle, but they just leap upon that and use it as a base. I suppose a 10-foot pole with a baffle might work, but then filling the feeder would be a chore, which it already is, with squirrels that can easily eat three pounds of birdseed a day.
At the back door, watching twitchy squirrels knock seed down to their grinning confederates, I've had dark thoughts, considered installing spikes or razors. I could buy a .22, shoot a few, nail their limp bodies around the feeder as a caution to others. I know of guys on my block who do that. It might not work, but it would make me feel better. Although it is against the law - the shooting guns in Northbrook part.
And I measured the impulse to shoot the squirrels and nail up their bloody carcasses against the philosophy I was supposedly acting under—my love of birds—and found it lacking. Killing squirrels would be unworthy of bird love, would diminish it. Remembering what started all this, I had an epiphany.
The squirrels actually belong in the yard. They've always been there. My not liking them doesn't change that and says much more about me than it does about them.
Maybe I could learn to like squirrels. Say this for them: The squirrels don't eat the birds; rather they all peck away at the seed fallen to the ground, oblivious to each other.
It might be easier, I realized, instead of constructing lethal feeders or attacking the squirrels, to simply accept that they are here to stay and try to find value in them. True, doing so will incur more expense (a lot more seed). But so would buying a .22.
To circle back on the subject at hand. I hope the metaphor doesn't elude you ("Steinberg says Palestinians are squirrels! Calls Jews birds!"). The only solution is a shift in mindset, on both sides. If the Jewish aspect of Israel is merely another brutal faith oppressing those who don't fit, what's the point? If Palestinians really want to go back to Israel, what's their plan for accepting the Jews who have always been there?
This is a realm where humans fall far short of squirrels which, despite all their shortcomings, coexist with birds just fine.