Replogle sold the globe to the world 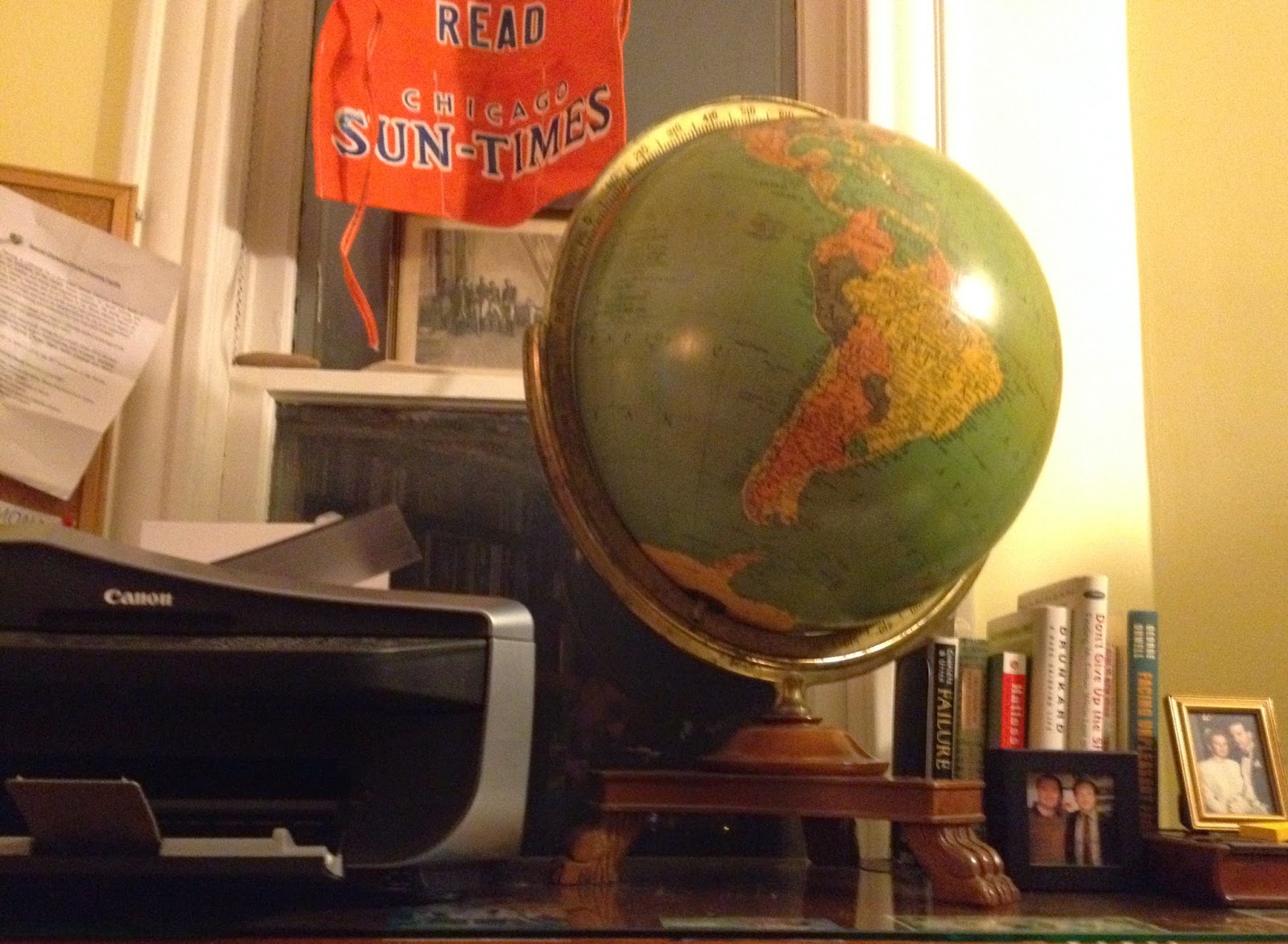 Memory fades. It's ironic that such a grim truth should be revealed, not just in one but in two ways, in Monday's frothy post about the carnival surrounding Kim Kardashian's Brobdingnagian butt.
But I suppose it's also apt. New wonders push into the space where old stuff used to be.
First, I used the word "steatopygic," (and I'm going to dial back on the big words. Enough already, with the big words, as my mother would say*) and cited Thomas Pynchon's "Gravity's Rainbow" for teaching it to me. Though the word isn't there. An alert reader cited a passage containing "callpygian" which means about the same thing (actually "well-shaped" as opposed to "fat"). Several readers mentioned "callipygian," which is a little scary. That must have been the source of my error, though how one morphed into the other I cannot imagine. I would have sworn...
The second reminder of the corrosive effect of time on memory was my use of "Replogle desk globe." I was not trying to be obscure (I'm never trying to be obscure; it just happens).  To me, it was a just a bit of local color, like saying "Radio Flyer sled" or "Jays potato chips." But several readers wrote in to say, "huh?"
Replogle was a Chicago institution for 80 years, from 1930, when its factory opened in Broadview, to when the company laid off 84 workers at the end of 2010 and sold the brand name to an Indianapolis maker of school globes. Though the world's largest globe maker in a town once known for maps—Rand-McNally (a map publisher, I don't want to mystify people again) got its start here in 1856—somehow, Replogle never quite entered Chicago's consciousness.
Though not for lack of me trying to put it there. I've had an old Replogle globe on my desk for more than 30 years, and was keen to see where those lion's paws feet were carved. Here's my visit to their factory, ulp, almost 17 years ago.

Take the geopolitical complexity of maps. Add woodworking. Season with metalcraft. Blend in the little-called-upon art of making spheres from flat surfaces, and you have a recipe for the odd mix of skills used making globes.
In the case of Replogle Globes, a million globes a year, from 4.7 inch desktop models to the office-eating 32-inch diameter Diplomat globes, cradled in their hand-rubbed mahogany frames.
Few nations on Earth are without a Replogle globe -- they sit in schoolrooms from Chile to China (the place names in Spanish in the former, of course, and Chinese in the latter -- the company also makes globes in French and German). There has been a Replogle globe in the Oval Office of the White House ever since Hoover. Replogle make globes not only of the Earth, but of Mars, Venus and the moon -- a big seller in the late 1960s and early 1970s. Not so popular now.
The company was started in 1930 by Luther Replogle (pronounced Rep-logel), a Chicago school supplies salesmen who began making globes in his basement.
The latest incarnation of that operation occupies 250,000 square feet on 25th Avenue in Broadview. Perhaps the best way to envision the factory is to think of it as three factories: globe production, metalworking and a woodshop.
The smaller globes are stamped from cardboard. Sheets of cardboard are cut into a 12-pedaled daisy shape, as are the paper maps that go over them.
The two flat pieces are molded together on enormous industrial flywheel presses, turning them into hemispheres. The eight-foot-tall presses with their tons of force seems enormous for the little 9-inch half spheres produced. 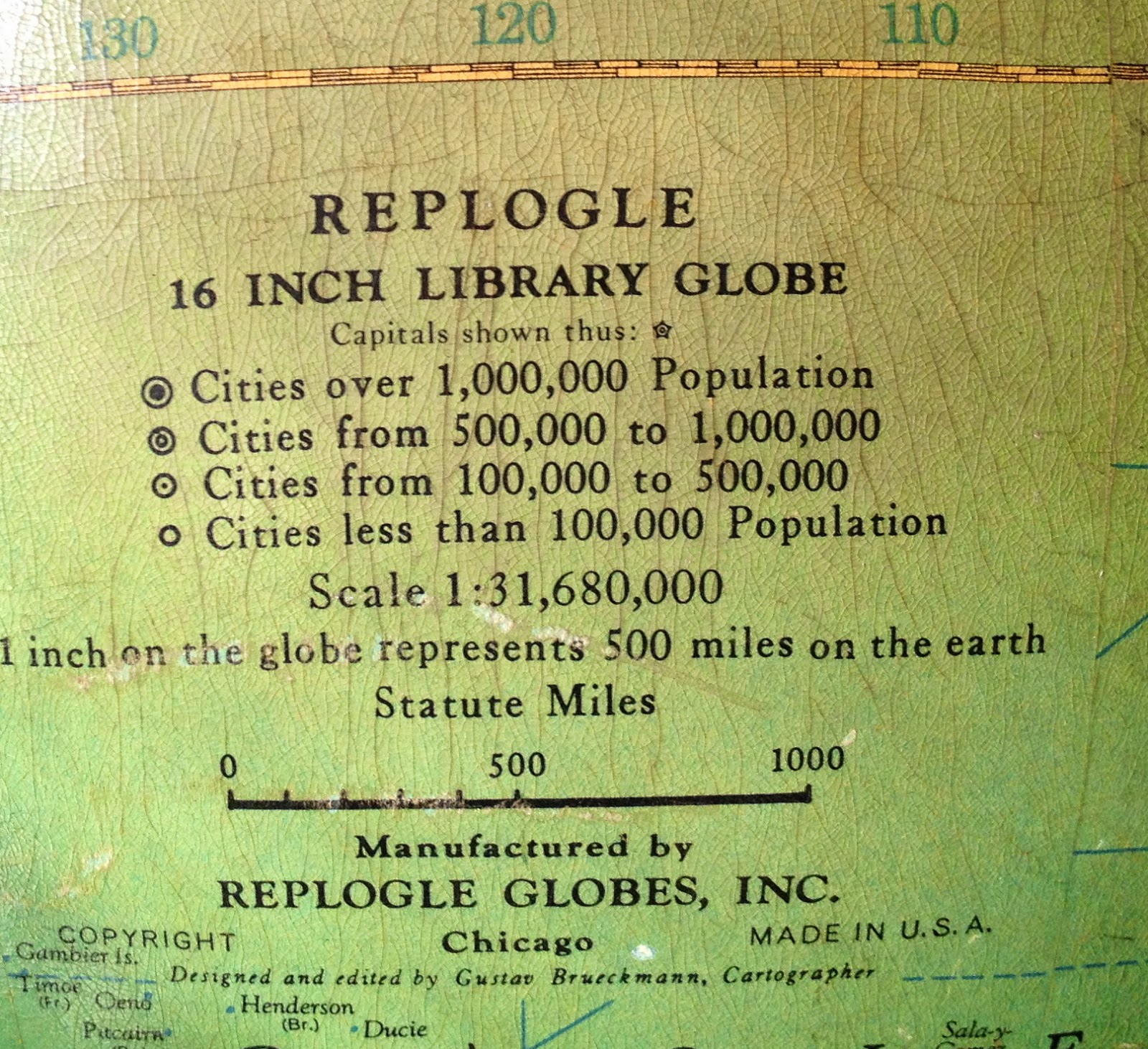 Globes that light up are made from plastic -- vacuformed in molds. The larger light-up globes are pasted over hollow polypropylene spheres.
For the largest globe, orange-peel-shaped map segments -- called "gores" -- are laid by hand on the spheres, carefully smoothed and stretched into place using special paste so there are no flaws or gaps. Customers paying up to $6,500 — the cost of the top model — can't be expected to put up with a lot of bubbles.
Laying the map over the large globe can take eight hours; and if the last gore somehow doesn't line up -- "I sit down and cry then pull them all up and start over," an employee says.
The hemispheres are trimmed, one at a time, and then "polar washers" are inserted — metal rings intended to let the globes spin for years without their cardboard giving away. Then a cardboard ring is glued into one hemisphere around the equator and the other hemisphere tamped onto it with a machine that gives the upper half a firm tap.
Finally, a tape is applied to mark the equator and — conveniently — hide the seam dividing the halves. The globes are sprayed with a UV protectant, so they don't fade.
Tumbling the globes on a conveyer belt would damage them, so they move around the plant suspended from hooks on an overhead chain system. At times the factory seems like a giant clockwork cosmos, with worlds of green and blue and black and sepia all moving at various speeds and directions and levels.
In the metalworking area, coils of steel are turned into circular bases, stamped, then decorated. The rings some globes sit in are "butt welded," the ends of the loop welded together then buffed so there is no seam.
Finally there's the woodshop, a large room filled with lathes and saws and stacks of lumber, waiting to be turned into legs and wood bases.
Despite the care put into buffing metal and finishing wood, the trickiest part of any globe is definitely the map. Replogle is one of the few companies around whose products can be made obsolete by events thousands of miles away.
The world is always changing. Arctic regions shift. Islands are cut in half by storms. Then there are the political upheavals, which have been kicked into overdrive this past decade.
Keeping track of the shift and flux of world borders is the job of LeRoy Tolman, chief cartographer, in his office one flight above the factory floor.
Sometimes he hits changes on the nose. The day West and East Germany re-united, a globe showing the unified German state was rolling off the lines.
Replogle sells 40 different types of globes; the largest, the Diplomat, has over 20,000 names on it. Updating takes time.
"We were kept busy for a year after the Soviet Union broke up," Tolman says.
Part of Tolman's job is determining the accepted outline of a nation. He spreads a big map of Egypt out over his desk, responding to an irate Egyptian government complaint that its southern boundary with Sudan is shown as it actually is, and not how it exists in the fervent hopes of the Egyptians.
Not much of a market in Egypt, so Tolman, after checking with the U.S. State Department, keeps the border where it is in actuality. That isn't always the outcome. The company wants to sell globes and doesn't flinch at following a customer's interpretation of what the world looks like.
Globes going to Arab countries retained "Palestine" years after Israel was founded. Japanese globes show the country as still possessing the Kirin Islands, which the Soviets stripped away in 1945.
So if Saddam Hussein placed a big enough order, he could get globes showing the United States as a possession of Iraq?
"All but Illinois," said Tolman. "Economics is the prime factor."
—originally published in the Sun-Times, Jan. 2, 1998 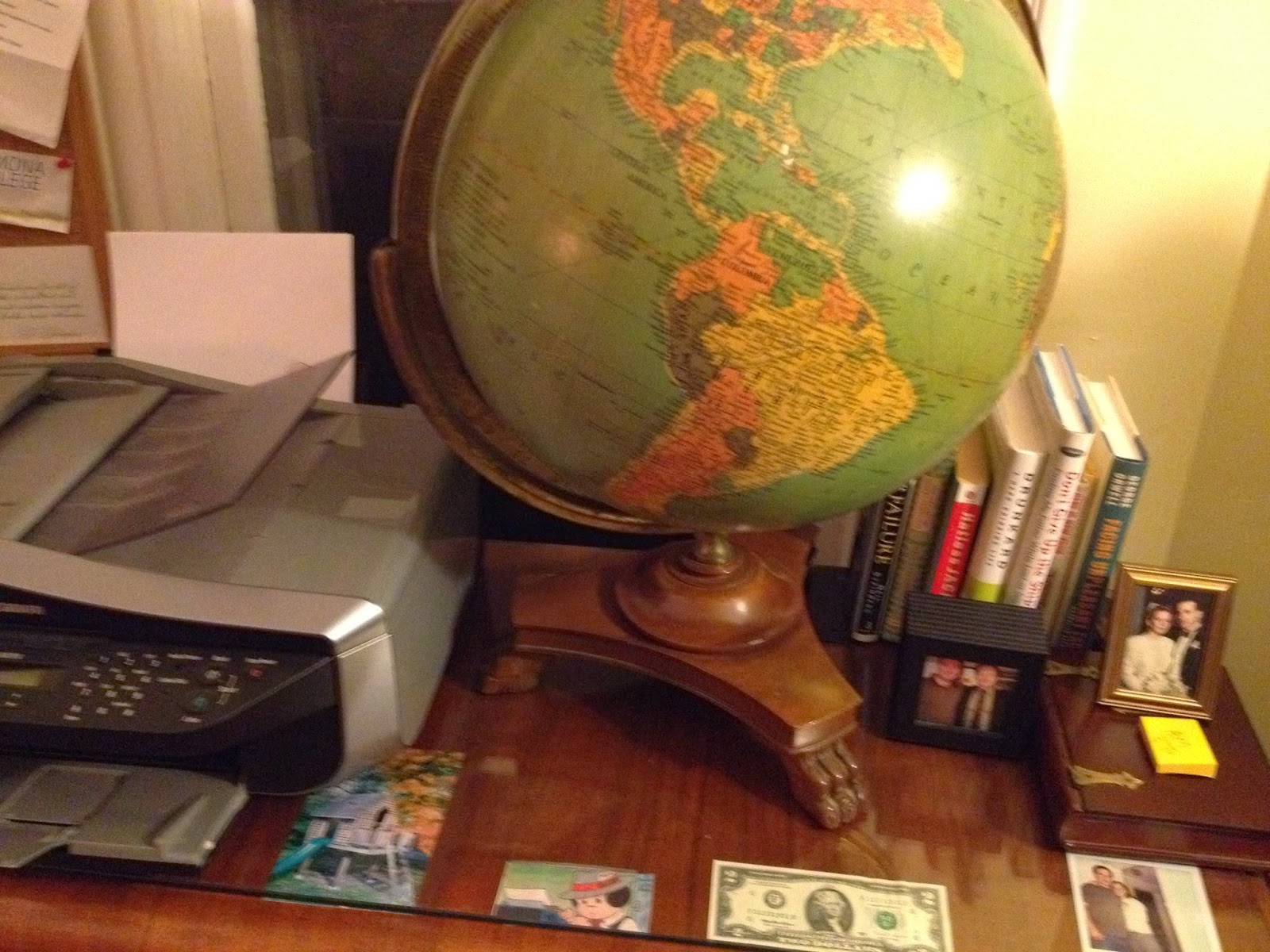 * Did you notice the irony of my swearing off big words almost immediately after deploying the Swiftian term, "Brobdingnagian"? I didn't, not until the third time I read this. Brobdingnag was, you might recall, the land of the giants in Jonathan Swift's "Gulliver's Travels," and "Brobdingnagian" is a fancy term for "very big." I left it in because, well, perhaps you're as amused by my inconsistencies and oversights as I have learned to be. God knows I can't correct them at this point.