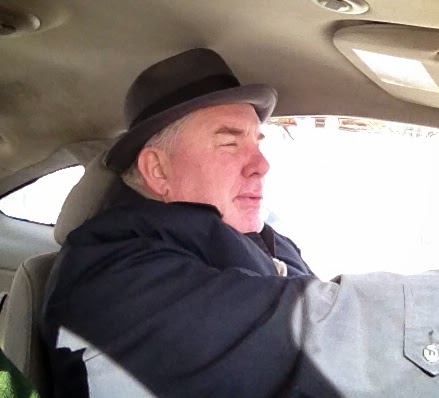 Steven J. Bahnsen is on time, of course. His 2009 Chevy Cobalt with 329,000 miles on it pulls up in front of the newspaper at exactly the appointed hour.
"I'm a man that's on time," he says.
Bahnsen is also a man who knows how to file a Freedom of Information request, how to comb public records and master federal guidelines, how to attend public meetings, persist with government officials and nag media representatives.
He also gives a good tour.
"I'm looking for Interstate 90/94. Where is it?" he demands, as we sweep toward the expressway.
I point out a green "90/94" sign just up ahead, to the left.
"That's one of the signs," he replies. "They're supposed to have a sign that says 'Junction 90/94' before it. You don't just pop up all of a sudden and say, here's an interstate. You're supposed to have a sign that says there's a junction there."
A fine distinction perhaps, but you are not Steven Bahnsen, a man in relentless pursuit of his passion: to make sure that the street signs of Chicago are exactly as they should be. It's a big job: in 2014, IDOT repaired or replaced 35,000 street signs and installed another 3,000 new ones.
We are on our way to Englewood.

"The bulk of these are on the South Side," he says of missing and deficient signs.
"Why the South Side?" I ask.
"Why does the South Side get garbage all the time?" replies Bahnsen, who lives at Michigan and 29th Street.
Bahnsen is 62. He wears a coat and tie, a blue raincoat and a fedora. Born in Iowa, he has a well-developed sense of How Things Should Be, maintaining a simmering indignation over a variety of government lapses that most people barely notice. Nor are missing signs the only official misdeeds that stick in his craw. Chicago Police driving their squads in Schiller Park, which is definitely not in Chicago, is another. He mentions it several times.
Bahnsen is no stranger to government himself; a retired postal carrier, he navigates the city effortlessly.
"I delivered mail in Garfield Park," he says. "Once you can handle that, you can handle anything. The rest of the city is Disneyland."
Not that he is engaged in a purely altruistic pursuit. At some point, his sense of personal grievance, built up over years of pursuit of the quest, competes with the quest itself.
"There are two factors at play here," he says. "One is the bad signs. The other is IDOT's attitude about me. It's a toss-up about which one is worse."
And what is that attitude?
"We are discussing a letter instructing him to cease all contact with IDOT," William R. Frey, then-acting director of highways at IDOT, now retired, wrote on Dec. 5, 2011, in an email obtained by Bahnsen through an FOI request. "His claims are frivolous, take up staff time and cost the taxpayers money. He's been doing this for years."
Forty years, according to Bahnsen.
In an hour with him, I did not find outrageous signage voids. More like missing details. An "Exit" sign on the Ryan that's supposed to include the exit number. Vague signage pointing out an expressway obviously in front of you.
Although he does have a point about all the signs pointing to the "22nd Street" exit on the Dan Ryan. "There is no 22nd Street!" he exudes, almost joyously. "It's Cermak Road!"
The name was changed in 1933: apparently not everyone has gotten word.
The Illinois Tollway is also on the receiving end of Bahnsen's endless queries, though it doesn't have a problem with Bahnsen.
"We've been corresponding with Mr. Bahnsen since 2011 on the placement of exit signs on the Tollway," says Wendy Abrams, chief of communications for the Tollway, calling Bahnsen "helpful." "He has been a patient and persistent advocate—writing to us from time to time and attending public meetings."
Bahlsen never tires of pointing out the problem.
"Now this is 31st Street," he says. "Say you're coming from the west on 31st. And you were told to take I-94 to go downtown. What do you do? Where do I turn? Are there any signs for I-94? There used to be [signs] over there but they got knocked down and they won't put them back up."
Why is this important to him?
"It just shows to me the way government's not working," he says.
As reluctant as I am to invite so diligent a man into my world, I have to admit that I like Bahnsen, though I could see that changing as the years wore on. Most people care about themselves only: their jobs, their family. Rare is the person who cares about much beyond themselves, and then it is a passing, hobbyist interest. To care deeply about something as abstract as proper highway signage, well, I'd say that there is a certain purity to it, one that demands respect, if not awe. Yes, what Steven J. Bahnsen cares about passionately might strike you as trivial. But what do you care about that's more important? Not only care about, but act upon? What?