You can lead a girl to slaw, but you can't make her eat 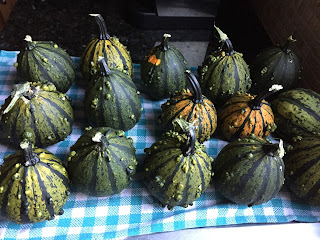 In an ideal world, the Sun-Times archive would be online, where you — or I — could access it. But it's not. In that same ideal world, I would at least be able to explain why it isn't online, or when it might be. We don't live in that world either.
Though I can post favorite columns here, where people can find them, one of the many benefits of running a blog. I even have permission to do so, until that happy day when the archive is online.
This is one of my favorite columns; I'm posting it so I can show it to people. It has an interesting back story. A chef I admire, Sarah Stegner, was coming to my kid's junior high school to make cole slaw. What I thought would be the story — the award-winning chef interacting with the school lunch ladies — did not turn out to be the interesting part.
What turned out to be the interesting part was the reaction of a group of 12-year-old girls I stumbled upon in the lunchroom. I was a little skittish about using them -- people are sensitive about being in the newspaper, and no parents had been consulted, no approval sought. None was needed, of course. A free press may go about in public. But I didn't want the story spoiled by aggrieved parents. So after I reported this but before it ran, I did something I had never done before, or since. I phoned the mother of the Queen Bee student I focus on, to tell her the column was coming, and seek her permission to use her daughter's name. To my relief, she didn't mind.

Lily Jaeger, 12, a willowy wisp of a girl, is sitting in the cafeteria at Northbrook Junior High School, picking at her lunch: a bag of salt & vinegar potato chips.
That isn't all she brought to eat of course -- she also has two sandwich cookies and some gummy bears in a brown bag.
"I originally had applesauce in there but I took it out," she explains.
Neither Jaeger, nor her seven friends crowding cozily together at a table, have touched the free cole slaw set out for them.
"Too healthy," explains Kayla Fox.
"We like junk," laughs Maddie Caplis.
"It's yellow . . ." says Shayna Lutz.
"If it were blue . . ." speculates Jaeger, in a dreamy tone suggesting that, well, then it might be an entirely different story.
The slaw is indeed yellow -- a rich orange yellow that suggests fresh peaches, which comes from the organic golden beets and roasted organic squash used to make it, along with ripe pears, apples, cabbage, honey and a sprinkling of roasted pumpkin seeds.
The slaw has just been prepared in the school's kitchen by Chef Sarah Stegner, who spent years running the dining room at the Ritz-Carlton, and Chef George Bumbaris, her partner now in the Prairie Grass Cafe and Prairie Fire shrines to carefully-crafted seasonal comfort foods. This is "Slaw Month" at the junior high school, which has Stegner and Bumbaris coming in each week to disguise good-for-you organic vegetables and fruits as cole slaw. "Hell's Kitchen" this ain't.
"As a chef, you are a leader in the food community whether you are conscious of it or not," says Stegner, explaining why she is here. "You set the pace for what's out there. If you can give a little bit of direction and guidance and help, you should do that."
Receiving direction are Donna Eckles, the food service manager at the school, and her staff of three: Linda, Joyce and Petra.
Cafeteria ladies do not have a good reputation -- popular culture tars them as mean and their food as glop delivered with the ring of a big stainless steel spoon against a metal tray. But Eckles, in her blue smock with snaps and her name on a metal tag, who received her culinary training on the job at Libertyville High School, works smoothly alongside Stegner, in her crisp white chef's tunic with cloth buttons and her name embroidered on it, who studied at the Dumas Pere Cooking School and received the James Beard Award, twice.
"Part of this is trying to get the staff here to do the setup, to work with them," says Stegner, who found Eckles receptive to ordering and preparing the organic produce.
"She did this, and I'm sure it was not easy for her. She peeled butternut squash and diced it up. She had to call the farmers and tell them where to deliver."
The school scrapped its fryer years ago -- fries are now baked -- and welcomed Stegner.
"She's really nice," said Eckles, who has cooked with Stegner before. "Sarah has come and done a chicken dinner with the whole works, broccoli slaw. We do Tallgrass burgers, and they did guacamole sauce."
That would be 100-percent grass-fed beef burgers from Bill Kurtis' Tallgrass ranch, the only beef served at Northbrook Junior High, a choice the school explains is healthier and not too expensive, when you factor in money saved by using organic-fed chicken. Lunches here cost $3, just 50 cents more than at the Chicago Public Schools, which has its own healthy initiatives starting this year. ("We have salad bars in Englewood," says CPS spokeswoman Monique Bond.)
Getting kids to eat slaw is another matter
Erik Dieschbourg, 11, is first to take a sample of the cole slaw, adding it to the pizza and chocolate ice cream cup on his tray.
"Is it good?" asks Reid McCafferty.
Dieschbourg tries a nibble.
"Yeah," he says, without enthusiasm.
The consensus is that the yellow slaw looks "gross" but those who try some like it.
Madelyn Rowan, whose hand is covered with scrawled notes, dissolves into giggles before hazarding a morsel. "It's really good," she says, to her unconvinced friends.
"Wash it down with this," says Maddie Tatham, 11, extending a Chewable Lemonhead in her direction.
Lily Jaeger reconsiders rejecting slaw.
"Is it free?" she asks, hopping up.
"She's not going to eat it," confides Shayna Lutz. "She's going to pick at it, say 'Eww' and start crying."
Not quite. Lily returns with a cup of slaw. She holds it dramatically at eye level, examining it closely, her features a symphony of disgust. She holds it to her nose and sniffs.
"I smelled it," she announces to her seven friends, hoping that will placate them. It does not. Goaded, she gives a shrug, then plucks up a shred of slaw between pink polished nails and raises it to her mouth, gagging as Shayna instantly brings a napkin to Lily's lips -- the way a mother would do with a child -- so her friend can spit the shred out.
Lily trots off to the water fountain, then returns, nibbles delicately upon a salt & vinegar chip, as if to settle herself, then decrees:
"It's actually not that bad."