Saturday fun activity: where IS this? 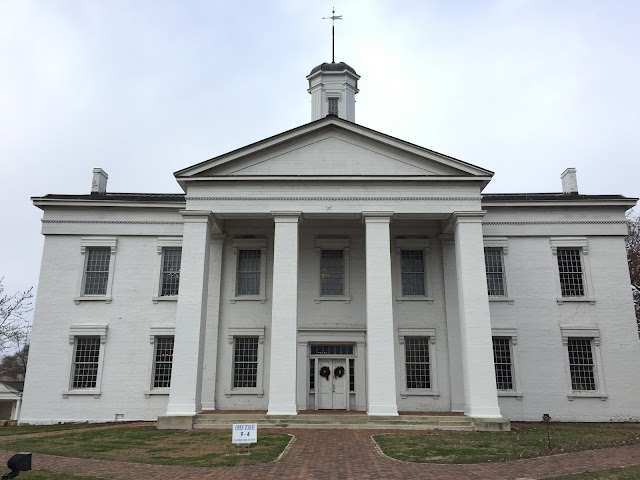 Careful Facebook readers might know I've been downstate earlier this week, working on my column for Monday. But I sort of fudged where I was. I did take a lunch break and walk through this old building. It isn't a residence. So what is it?
To be honest, I wasn't thinking of the contest when I took the picture. Had I been, I might have framed the building a little better. It drifts off to the right. Normally, I'd have a few shots so one might turn out. But this time, I merely trudged out to almost the proper distance, turned, and snapped one picture. It was cold.
Still, it will serve our purpose. I imagine someone will nail it at 7:01 a.m.
The prize is going to be one of the 2015 posters -- with the year waning, I've decided it's time to retire those, to remove them from sale, take the ads down from the blog page, to make room for more paying advertisers (hint, hint). It's one thing to reference them a year later, to cite 2015 in 2016. Another for them to linger as the years click on, like guests at a party who won't leave when the host starts doing the dishes. An air of sorrow creeps in. So if you don't win today, yet want one, but have been delaying for whatever reason, because that's what people do, order in the next few weeks or lose your chance.
Have you seen this rectangular pile of Jacksonian Era bricks? Where is it? Place your guesses below. Good luck.