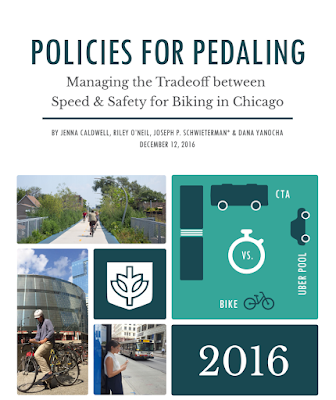 You know what I hate? I hate when somebody finds an error, a typo, a factual slip, in my copy, and then waves it over their head as a general indictment of myself and my writing.
I hate that.
As a writer.
However, as a reader, it is a different story.
Sometimes I'm reading along, reading, happy as a clam, and I stub my toe on somebody else's mistake. It stops me dead. Such as what happened Wednesday, reading "POLICIES FOR PEDALING: Managing the Tradeoff between Speed & Safety for Biking in Chicago," the new report by the Chaddick Institute for Metropolitan Development at DePaul University. Friday's column is going to revolve around it.

I appreciate the well-designed cover. Admire the lay-out of the "Study Team" page with its four authors and three designers. I enjoy the concision of its executive summary.
Then on page two, the first section, "I. POLICIES AND REGULATIONS GOVERNING BIKING IN CHICAGO."This paragraph:

Although Chicago has received national attention recently for its bike-friendliness, it is often overlooked that the city has embraced and encouraged this mode for many decades. The city has a long tradition of investing in biking infrastructure, starting in earnest with Mayor Calvin Harrison, who created a bike path from the Edgewater neighborhood to Evanston and made bicycling a prominent part of the 1897 mayoral campaign. Between the 1960s and early 2000s, both Richard J. Daley and Richard M. Daley also demonstrated a commitment to cycling improvements, including off-street trails and protected bike lanes.

Did anything leap out at you in that paragraph?
Maybe "Mayor Calvin Harrison." No? Because it sure popped me in the nose. Based on the year, they mean Mayor Carter Harrison. One of the most famous mayors in Chicago history not named Daley.
Yes, I know, to write is to err. Yes, I know I am capable of making the same kind of mistake and worse.
But still....
Calvin Harrison. Perhaps because it's in the very beginning of an academic report with four authors. Perhaps because it's such a famous mayor -- really, it's like citing Mayor Harvey Washington.
I sympathize with those behind the study -- which I found useful and interesting and write about on Friday. But c'mon guys. A thing like that calls the rest into question. And at the very beginning. If you're going to drop hair in your food, at least have it in the dessert and not the appetizer.
Writing is a learning experience, and I've learned, from this, just how vexing those mistakes are, to a reader. Next time someone plucks a Calvin Harrison out of my copy, I plan to be less testy, less defensive, and more sincerely aghast. It really undercuts all your hard work.
Posted by Neil Steinberg at 12:00 AM