A kaleidoscope of crazy 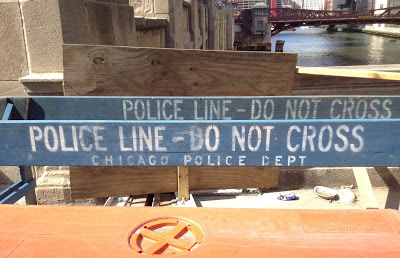 There's a lot of crazy in the world. I know that — heck, I coined the phrase. And I believe it. But you can believe something to be true, sincerely, in your heart, and still marvel at specific examples.
For instance....
Take yesterday's column, about Chicago police recruits taking ethics training at the Illinois Holocaust Museum. It was a long, seven hour day, spent at the Holocaust museum, 9 a.m to 4 p.m., with 113 would-be cops.  Too long to be at the Holocaust Museum. I do not recommend it. Not to take anything way from the institution. It tends to bring a person down.
Still, it was worth it, because it led to an interesting story, I felt, delivered fairly directly. No need for me to get on a soapbox. Just present the interesting thing going on. It raises enough important questions on its own.
If you haven't read the column, read it here.
Done? Feel like you've understood it? Good. Now we'll have the police reaction. Pause, to imagine what that reaction might be. What do you think a veteran police officer would say? Got your idea? Good.
Here's the reality. We'll just use one, but he expresses a common reaction. The most common reaction:


I am a highly decorated, retired Chicago Cop (31yrs.)with several thousand( you read that correctly- several thousand) arrests under my belt. Comparing The CPD to the Nazi Third Reich is so insulting & idiotic, that I really don't know how to respond. I would also imagine that comparing innocent Holocaust victims to "Inner City Thug Casualties" is just as insulting to the Jewish People. I don't think any Holocaust Victims were robbing,shooting,wielding weapons, car-jacking or threatening anyone, when they were murdered...........do you?You owe Cops an apology.

What do you say to that? It's just so sad. It made me sad to read, to think about, not because it was a unique reaction, but because it is the common condition nowadays, not just with cops and this story, but with so many people. Our vision has become kaleidoscopic. We can look at the most mundane thing and see a shattered, swirling mosaic of crazy. What can you do in the face of that? Nothing.
Posted by Neil Steinberg at 12:00 AM