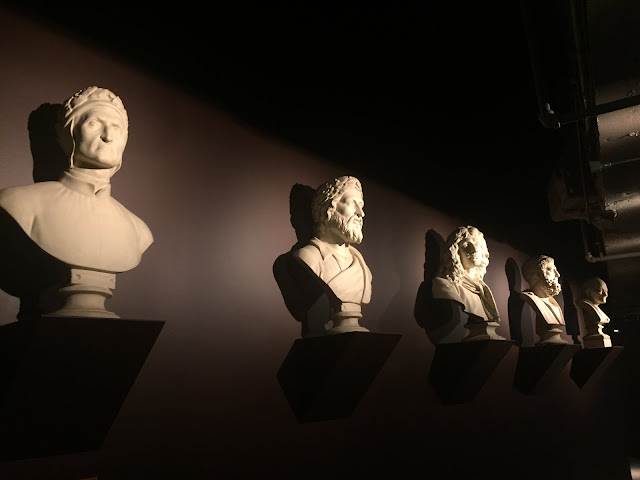 Every now and then, a reader writes in and uses a certain inappropriate word, such as this compliment, received Saturday:
"Once again a spot on editorial ..."
Never do I archly observe that editorials are the unsigned expressions of the newspaper's collective opinion, producing by the editorial board and running on the editorial pages. What I write are "columns." The photo and the name are dead giveaways.
Ditto for when people refer to my non-fiction books as "novels."
I don't write that because someone who doesn't grasp that not-so-fine point of writing is either new to the realm, or not the sharpest knife in the drawer, and either way probably would not benefit from a lecture.
Instead I try to just use the word properly in my response, "Thanks for your kind words about my column."
But sometimes, in different situations, correction does seem in order. Particularly when you know the person—or organization, he said, in a bit of foreshadowing—involved. If you respect someone, you are obligated to set them straight.
I obviously respect the Goodman Theatre. I've been going to their plays since they were in the basement of The Art Institute. I respect the actors and directors involved. I know the publicity staff. They not only offer a steady stream of the classics that I crave, but new stuff, such as "Father Comes Home from the Wars," written by Suzan-Lori Parks, which I'm tempted to say could hold up against anything Eugene O'Neill ever wrote except its funnier, it isn't five hours long, and nobody makes a speech about Schopenhauer. 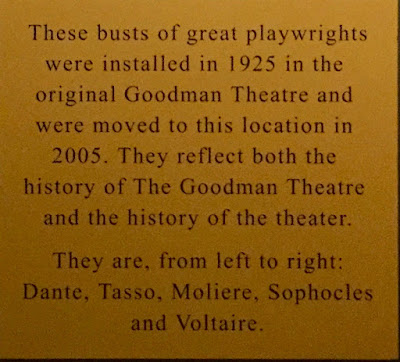 Heading into "Father Comes Home" earlier this month, I noticed, at the entrance to the Goodman's smaller Owen Theatre, the above line of five busts, with my main man Dante to the far left, by the door I was entering, along with a plaque. They've been there for years, but I never really registered them before, never paused to consider. I recognized the guy at the far end—Voltaire—but was unsure of the three in the middle. So I read the plaque. Here it is.
Now, do you notice what I noticed, right away? Think about it a moment.
I'll give you a hint.
"These busts of great playwrights..."
Dante was not a playwright. He wrote an epic poem, The Divine Comedy. He wrote his early love poems with a sort of narrative glue holding them together, Vita Nova. And various letters sucking up to patrons and denouncing the speech of Florentines and such.
No plays. Not a one. Never. Mai, mai, mai, as the great man might say.
Tasso, Moliere, Sophocles and Voltaire, obviously wrote plays (well, in Toquato Tasso's case, not so obviously. He must have been a bigger deal in 1925, when theses busts were installed in the original Goodman. Unlike Dante, he did write a play, "Aminta,"

Though such is the authority of a plaque—you just don't expect them to valorize a blunder—that I kept nosing around the Internet, making sure that Dante didn't write a play that I just happened to never heard of, despite reading dozens of books about him. Frankly, it's worth it to be so spectacularly wrong to find out about Dante's play. But I don't think so.
So what do I do with this observation? I suppose I could mention it, sotto voce, to my pals at the Goodman. But they'd just roll their eyes. (I did ask them if they'd ever heard a complaint about it before. Not to their knowledge...)
Nobody wants to replace a plaque.  Sometimes a bit of mild public scolding is just the thing. And to take the edge off it, I'll pay for the new plaque. Assuming it's comparable to this one, I'm not popping for bronze and lots of scrollwork. Just change "playwrights" to "writers" and, boom, we're good to go.
Although, heck, while we're at it, let's lose "Tasso." Nobody knows who Tasso is. He's a man with a beard. We'll call him "Aeschylus "and nobody will be the wiser.