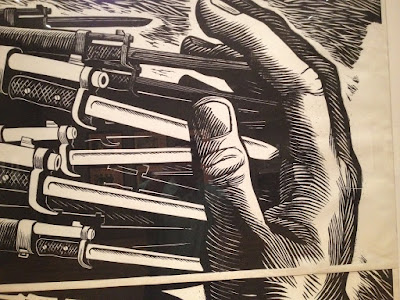 The column in the newspaper can't be longer than 719 words. There isn't room. I'm not sure if that's the precise limit—my gut tells me I could sneak in 720— but that's the number I don't let myself go beyond to make sure it doesn't run 790 or 800 words, which wouldn't fit on page 2, where I like to see it smiling back at me in the mornings.
Sometimes I bite the bullet—on Monday, when I was trying to explain the allure of manhole covers, I went 900 words and got the column sunk deeper in the paper.  But on most days, if it runs 720 words, I take one word out. It might say something, and not something good, that I didn't feel the need to request the same for Wednesday's column. It held up Mothers Against Drunk Driving as a reason for hope, if not a roadmap, in the frustrating battle against gun violence. MADD's success, and the nation turning away from smoking, show that change is possible.
Even starting out with a Sam Kinison bit, I felt I could make my point in my allotted space. But at that length, some nuance is lost. When I sent the column to Mothers Against Drunk Driving—they had provided a high-resolution copy of the photo I wanted to use—their response had a certain tone of ... disappointment.
"Sadly, while we have come a long way, drunk driving is STILL the No. 1 killer on our roads," wrote Becky Iannotto, MADD's senior manager of communications. "It’s no longer funny and thousands of lives have been saved, but we still lose 10,000 to 11,000 people every year. Still working to change attitudes, support enforcement and strengthen laws until we can really get to zero!"
I saw what she was saying. Just as as addicts and alcoholics are said to be in recovery, but never "recovered," so MADD has successes without victory. The fight continues: this Saturday is "Saturation Saturday" in conjunction with the National Highway Traffic Safety Administration's $13 million "Drive Sober or Get Pulled Over Campaign."
I shouldn't write off overlooking that to tight space. The truth is, I was trying to make a point—MADD has accomplished great things against an entrenched killer, so can opponents of Armed America. To pause, and observe that despite nearly 40 years of gerbil-on-a-wheel effort, it's still an enormous problem, well, that would kind of take the air out of the message I was trying to inflate.
I should have mentioned MADD's ongoing fight.
Nor did I mention Moms Demand Action, a grass roots organization trying to do exactly what I was suggesting: weaponize the pain felt by the survivors of victims of gun violence and use it against the entrenched and lucrative macho gun fantasy that thwarts any kind of commonsense action on the topic.
That's the beauty of the blog: it can add an asterisk where need be. Although, that said, the overwhelming reaction of readers was gratitude to read something at all hopeful about our current political state. So to the degree that my omissions might have reinforced the sense—or should that be "illusion"?—of hope, I suppose it was not an entirely bad thing.