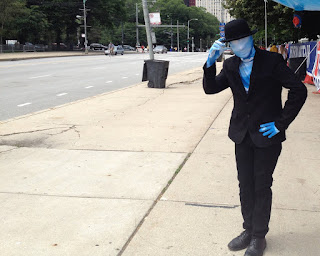 My sense is that Dorothy Brown figures, if she retires, then she can't be prosecuted, as the charges of corruption that have swirled around her office for years gather to gale force. A version of the ostrich's head-in-the-sand defense: "If I'm not in my office," she no doubt thought, in the kind of flash of genius that marked her nearly two decades as Clerk of the Cook County Circuit Courts, "then the feds will never be able to find me!"
Fran Spielman spells out the latest news, as always.
The phrase Brown used, several times, is that it is time for her to "go to the next level."
That's one way to put it.
I was on the Sun-Times editorial board when Brown became county clerk in 2000—that's a scary thought—and remember the unsettling perkiness she exuded, which I came to see as a smokescreen for the ineptitude, arrogance and corruption—proved against her underlings, not against her, not yet—that followed.
Her department, who generally despised her, must be dancing in the hallways. I can't say I'll miss her: I've tuned Brown out for years. But I did think this might be a good moment to dig a few Dorothy Brown chestnuts out of the old vault. It's too early to breathe as sigh of relief: she hasn't quite gone away. But at least that happy day is in sight. It will be interesting to see which level she ends up sinking to: maybe she can join Carol Moseley-Braun in pecan farming and tea sales.

What would be coming out of the clerk's office if Dorothy Brown hadn't ordered her employees to keep their mouths shut? As it is, they're dishing dirt like frenzied ditch diggers. Two great accusations came zipping my way: a) that Brown has her security detail empty out elevators before she uses them, and b) that this same security detail also pulls her boots on for her. Devoted to the requirements of the form, I ran this by Brown, who responded a) no, she uses the judges' elevators and b) no, they don't.
At this point I thought the fair thing to do would be not to print these baseless charges. I checked with two editors here, who said:
a) "Why start being fair now?" and b) "It's election season."
See, it isn't just me.
—Originally published in the Sun-Times, March 10, 2004


God bless Dorothy Brown. She's the perkiest person I have ever met in politics, bar none. The Cook County Circuit Court clerk has more spunk than an Olympic gymnast. She makes Katie Couric seem like Eeyore.
Have you met the woman? Imbued with energy, excruciatingly well-mannered and the grace of God flowing from her like glow off a light-bulb. Her cringing subordinates might paint a different picture, but that's how she comes across during her visits to the newspaper.
Of course, she can't run her own department, never mind run the city, not that she'll get the chance: Mayor Daley will crush her like an egg.
Still, while she lasts, she should provide an interesting contrast to the morose Saul sulking on the fifth floor of City Hall: Daley, the sourest, most visibly unhappy man to hold elective office in America since Calvin Coolidge retired to Vermont, vs. Dorothy Brown, who seems about to bust out into song at any given moment. I'd like to pretend she'll give the mayor a run for his money and he'll only get 70 percent of the vote this time. But I doubt it.

Posted by Neil Steinberg at 2:48 PM