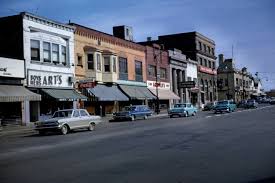 I was supposed to be back in my hometown this weekend for the wedding of my friend's daughter, a girl I've known since birth. I felt bad missing it—originally, I tried to schedule the surgery for AFTER the wedding, but my wife put an end to that, and I saw her point: if I damaged my spine waiting a month to go to a wedding, not to mention the travel, and the dancing, and whatever, I would never forgive myself. Nor be forgiven.
As it was, I had this column about my hometown already cued up and ready to go. Last month I was friended on Facebook by the prettiest girl in Berea High School in 1978, the homecoming queen. We messaged a bit, in a convivial fashion, and I reminded her of when I asked her to prom—not seriously, I knew she already had a boyfriend; more as a piece of personal performance art, something a newly-confident 17-year-old would do as a lark, because he could, maybe to show he could face the rejection that any ambitious person is going to face every single day. She was very kind about turning me down.
I mentioned that I had written a column about our home town, 20 years ago. I've considered reprinting it in the past, but it never seemed to quite pass muster. A little flat, maybe.
But the beast must be fed, and I think this rises to the standard for a quiet Saturday in August. Besides, there is an interesting tidbit about how this column was received. The Sun-Times editor-in-chief at the time, a flamboyant, pink-cheeked, white-haired slab of a New Zealand press lord, Nigel Wade, phoned me the evening this ran, perhaps a bit squiffy, and accused me of slipping a parody of the Tribune's treacly sentiment-junkie and fellow Ohioan, Bob Greene, into the newspaper—somebody must have suggested that to him.
That kind of call didn't happen often—it might never have happened, before or after— and I remember taking a breath, and evenly explaining that I would NEVER do that. I was indeed born in Ohio, in Berea, and that every word in the column is true. Furthermore, just because Bob Greene has wrapped his thick fingers around Nostalgia and is squeezing with all his might doesn't mean he has murdered the emotion for others, and I'm entitled to feel maudlin about my dying home town. I distinctly recall saying, "If he can do it a thousand times, I can do it once."

BEREA, Ohio—The Fashion Shop is shuttered. The movie theater, too, its green and yellow marquee blank. The bank is now an antiques store. You can step behind the counter, right up to the gleaming stainless steel vault door and admire the pristine gears and massive pins inside. Within the vault itself, lacework is on sale.
For the last two decades, whenever I returned to my hometown of Berea—every year or so—I marveled at how time had passed it by, this little town of 35,000, just west of Cleveland.
And pondered a haunting question.

How could a business such as the Fashion Shop survive, with its window filled with the same ancient, chipped mannequins modeling what always seemed to be the same pale blue or green checked house dresses? How could the movie house, where "The Sting" played for a solid year in 1973, hope to keep going, with huge multiplexes opening in towns all around?
The answer is they couldn't.
I missed the foreshadowing. All the new discount stores on the road between the highway and downtown. They should have been a tip-off. Who'd settle for the Fashion Shop when there is a big outlet mall? Who would go to Milton's Shoes—also gone—when there is a giant discount shoe store?
Nobody, that's who.
I tried to tell myself that this is good. That the only constant is change; the sole reason I care is that this is my hometown. I reminded myself what a grim place Milton's Shoes had been, with its scary middle-age clerks, scurrying under the hawk eye of Mr. Milton to retrieve boxes of Buster Browns and Red Ball Jets from the mysterious back room. The stock of shoes, so limited, that in order to fit my EEE feet my mother eventually had to give up and drive all the way into Cleveland, to the palatial Scientific Shoes (yes, that was the name; do you think I could make that up?)
Hard not to look at the town and feel a little sad. Not only is the place losing its charm, but it's doing so because of bad choices.
In the 1970s, Berea demolished a big hunk of the downtown to build an open-air mall of charming brick storefronts. It seemed a dynamic step, but it turned out to be a blunder. The downtown stores were just hanging on in their turn-of-the-century buildings. Nobody could afford the high rents in the new mall; the entire thing went under. Every store. Now the mall's an old-age home.
Don't get me wrong; God bless the elderly. But it does something to a town to put a nursing home at its center. Two, now that I think of it. The old hospital is a nursing home, also.
The downtown in Berea faces a green triangle—The Triangle, they call it, home to a Civil War memorial, the same stone soldier who stands watch over many small towns. During my visit I saw a panoramic photo of the Triangle from 1928. Then, it was a broad expanse of green trees, with a gazebo and a lot of park benches.
Now, the Triangle is much smaller, whittled away by street widening and parking space, a last attempt to lure people to the shops, shops that aren't there anymore.
No more benches. No people downtown to sit in them anyway. Who has the time?
I tried to tell myself that this is only what is happening in small towns all across America. In comes Wal-Mart, out goes the general store. Up in Evanston, Chandler's, the stationery store, and Hoos Drug are both closed now. A decade ago you couldn't go to Northwestern and not have a funny story about trying to get some Hoos family member to cash your personal check. And seeing Chandler's close was like having the post office go out of business.
This is the way of the world, I told myself. Someday kids will wax nostalgic about DigiLand and SaveMax, when they are being replaced by whatever comes next. Onward and upward. Excelsior!
I told myself this. But I didn't believe it.
—Originally published in the Sun-Times, July 30, 1998
Posted by Neil Steinberg at 12:00 AM