Writing every day, with columns in the paper three times a week, I can't afford to go to too many places, report on what's going on, and then fail to find a way to get it online, or into print.
It happens, though. There was the time I went to Fermilab. They were still trying to discover the Top Higgs Boson and had taken apart the superconducting supercollider to, I don't know, clean it or something. I went, spent the day talking to physicists about the quest. I actually stepped inside the disassembled linear accelerator—how many guys can say that? Leaving, I thought back on my five or six hours there and realized I was just as out to sea about what was going on there as I had been when I walked in.
I didn't write about it.
Another time, a few years back, I hung out at Whimsical Candy, with owner Chris Kadow-Dougherty, watching her make candy—anyone can do that, just show up. It's always being made. The kitchen is right there. I can't recall why I never wrote anything. My hunch is, she was soft-spoken, and modest, and didn't fit any of my limited range of pre-conceived narratives. I loved the candy; I liked her. But I failed to convey any of it to you. 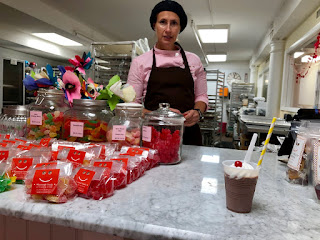 That didn't keep me from going back, from time to time. Like last Thursday. I finished lunch at Gene & Georgetti, and was hobbling toward the Loop, cut down North Franklin on my way to Union Station. Whimsical Candy is right there, at 175 North Franklin. I had five minutes to spare. How could I not? Particularly since my wife had been having a taxing day. I knew Whimsical makes her favorite chocolate bar in the world, the Raspberry Truffle Crisp: a thick rectangle of dark chocolate, raspberry ganache, orange caramel and crispy ... rice, I suppose.
That would surely perk up her day. I popped down, and was reminded what a pleasant, colorful, fun, enticing, out-of-the-way place it was. I chatted with Chris. She let me sample their newest treat, frozen cocoa. With a dollop of real whipped cream and a maraschino cherry. We talked about Serendipity, a place in Manhattan that also offers frozen cocoa. I made sure to pick up something to tide me over on the train. 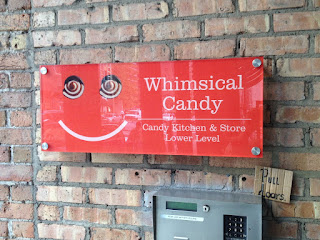 And then I was gone, thinking, "I'm falling down on my basic duty as a journalist—to tell people about places and things they might not know about."
So there you have it. You owe yourself a visit to Whimsical Candy Kitchen, 175 N. Franklin. Do not be put off by the price—the Raspberry Truffle Bar is five bucks and change. But if you eat it in stages, by cutting yourself a slice, as we do, it'll easily make three or four servings. The thing is fresh and delicious in a way that no candy you've had before is, shockingly so. (My wife, when she first tried the Raspberry Truffle bar, let out a highly uncharacteristic string of obscenities that I will translate out as "Golly! This really is very, very, very good candy." )
So not the deep dive into Chris' world that I failed to produce, and might very well try again someday, because I hate to give up on such things. But at least public notice. Every corner in the Loop has a Garrett's popcorn nowadays. But if you want to bestow some Super Secret Hidden Chicago on yourself or a loved one, you'll give this place a try.