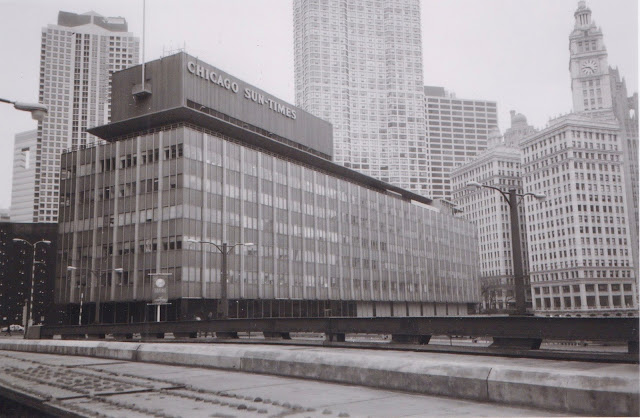 My first thought, stumbling upon this, was to save it for the paper's 75th anniversary, in 2023. But nothing is guaranteed in journalism, and I figure, better post it now, if only to clue in young people at the paper who might be interested in the storied past of the organization they've joined.
Kidding. I know young people don't care about that kind of thing.
And second, if we make it to 2023, and I do too, then I'll take a new crack at our history, telling it in a different way.
Yes, the actual date was Monday. I thought about pushing my Roman senate column to today. But it seemed odd to hold a current commentary so that a chestnut can stick the actual date, and I doubt many readers care about that kind of thing. Assuming they care at all. This is very long—3370 words—so the less preface the better. It makes me nostalgic, both for the colleagues lost—I remember Harry Golden Jr., striding into the newsroom in his Guys & Dolls double-breasted suit. And for the tone of optimism and enthusiasm, though I believe both are still warranted.

Happy birthday to us!
The Chicago Sun-Times is 50 years old today. Every day for the last half-century, without fail, the Sun-Times has been a vital part of the dynamic life of Chicago.

Photos always have been important at the Sun-Times—if you look at the 1948 masthead, you'll see a drawing of a Speed Graphic camera and the slogan "The Picture Newspaper." In 1971, Jack Dykinga won a Pulitzer for his disturbing photographic essay "Children in Purgatory," depicting the deplorable conditions under which retarded children were warehoused in state institutions. In 1982, photographer John H. White won another Pulitzer.
On March 4, 1978, Marshall Field V shut down the Daily News. That dark day in Chicago journalism was a bittersweet boon for the Sun-Times, which inherited the stars from the Daily News. Columnist Mike Royko joined the paper, as did Carl Rowan, whose syndicated column is carried in newspapers nationwide today, investigative ace Charles Nicodemus, Pulitzer-winning cartoonist John Fischetti and book editor Henry Kisor.
The same year the Daily News was put to sleep, the Sun-Times printed a series that is studied to this day in journalistic ethics courses in America: the Mirage Tavern. The idea, ironically, was first pitched to the Tribune by Pam Zekman, then a reporter there. But it didn't go anywhere, and Zekman moved to the Sun-Times.
In 1977, the newspaper bought a decrepit neighborhood bar, created hidden crawl spaces in the walls and ceiling for photographers, and waited for the city inspectors to come by and accept their payoffs for ignoring code violations. "60 Minutes" filmed the proceedings.
A wave of indictments, firings and reform measures followed the Mirage, and while some argued the paper had entrapped the corrupt officials, it had done no more than answer Mayor Richard J. Daley's perennial chant: "Where's your proof?"
The Mirage was just one of several noteworthy exposes at the time. "The Abortion Profiteers" revealed horrifying abuses at clinics. "The Accident Swindlers" told of shady lawyers cheating insurance companies.
The 1980s saw Harry Golden Jr. strut his way for the last time through City Hall, where he was the dean of the press corps. He had an uncanny ability to dictate a straight story from notes all the way down to the "period, graf." He died in 1988. And it was the last decade that fabled reporter and columnist Sydney J. Harris would have his words set in print in the Sun-Times. He died in 1986.
While the 1980s began in glory, the middle of the decade was a trying time for the Sun-Times, during two years of ownership by Rupert Murdoch, from 1984-86. Investigative pieces continued, however. In 1986, the Sun-Times scuttled a city effort to stick the new public library in the shuttered State Street Goldblatt's store by showing that, among many deficiencies, the floors at the old store were too weak to support the weight of books. The paper's stories are credited with leading to the construction of the Harold Washington Library.
The "Bitter Lessons" series of 1987 exposed for-profit business and trade schools that were ripping off students and the federal Treasury for millions of dollars in student loan fraud. It resulted in the closing of more than a dozen schools and brought reforms in state law governing the schools and changes in the federal student loan program.
In the 1990s, the Sun-Times still digs for news as it always has. In-depth series such as "The Slum Brokers" and "Schools in Ruins" shook up complacent officials. The U.S. Postal Service was jolted into cleaning up its act after Nicodemus cataloged its dismal record of mail service in Chicago. Congressional power broker Dan Rostenkowski ended up in a federal prison after Chuck Neubauer, Mark Brown and Michael Briggs turned a bright light on his shady scams. Washington Bureau Chief Lynn Sweet broke the story of how the Democratic National Committee sold access to President Clinton and other high officials in the White House.
The Sun-Times continues to blow the lid off big stories. Last October, City Council power broker Pat Huels was forced out after the Sun-Times exposed his financial dealings. Not all of the Sun-Times is about uncovering corruption, of course. There is political commentary and reporting by Washington insider Robert Novak. The sports section is the perennial favorite of Chicago sports fans. Richard Roeper's view on modern life has become so popular that it is syndicated to newspapers nationwide. Gossip of all shades is dished by the triumvirate of Bill Zwecker, Mike Sneed and, the king of Chicago, Irv Kupcinet, whose landmark column just turned 55.
During the early 1990s, some questioned the future of the Sun-Times, saddled as it was with debt after its purchase by New York investors. That question was answered in 1994, when the newspaper was bought by Hollinger International, a multibillion-dollar empire of approximately 85 paid dailies, including such famed mastheads as the London Daily Telegraph and the Jerusalem Post, and 400 non-dailies. The purchase solidified the future of the Sun-Times, particularly with the commitment to new presses. Under Hollinger's direction, the Sun-Times went online in 1995, preparing a cyber-edition to mark its place in the burgeoning and uncertain universe of the World Wide Web.
—First published in the Chicago Sun-Times, February 2, 1998
Posted by Neil Steinberg at 12:00 AM