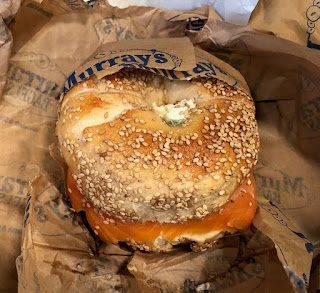 The conversation was about where we should eat this weekend in New York City. As it drew to a close, I checked the time on the cell phone. An hour and 17 minutes. An hour and 17 minutes of consulting menus, filling every meal time slot. My fault, I'm sure. It must be hereditary, as this column hints. It did my heart good to see the name of Bernie Beck, who I used to refer to as "The fireaxe behind the glass." If you couldn't find a source for a story, if you hit a brick wall after your editor asked for 600 words on the social impact of socks, you'd call Bernie Beck and he'd speak intelligently about it, or anything else. It got so I refused to call him, lest every story feature Bernie Beck. It seemed like cheating.

NEW YORK After the plane landed, I met my friend. First we ate, then we drank.
Next morning: met people I hope to do a bit of business with. First eating. Then drinking.
Next day: eat, eat, eat. And the last day, Sunday, the highlight of the trip, a pilgrimage to Barney Greengrass ("The Sturgeon King") on Amsterdam Avenue. We stood on the street for an hour, heads bowed like penitents, waiting.
Nova lox, with fried onions and scrambled eggs. Creamed herring. Sesame bagels. Chive cream cheese. Fresh orange juice. Coffee. Chocolate bobka cake.
Every so often, particularly at the holidays, when the feasting hits a fevered pitch, almost a mania, I find myself wondering: "Why?" In a culture so abundant as ours, where we can stuff ourselves 365 days a year and often do, why does eating loom so large, especially the last six weeks of the year, when four major holidays unfold? We have barely digested Thanksgiving, and the next round looms. Why don't people ever get together and hike?
I had an idea, but I sought the opinion of the smartest man in Chicago, Northwestern sociology Professor Bernie Beck.
"There's nothing new about it," he said. "It goes all the way back. Food is one of the major ways of celebrating; how human beings know they are doing something important. They eat, they drink, get drunk if possible."
He listed other ways to celebrate—dance, song, and one I hadn't heard of. 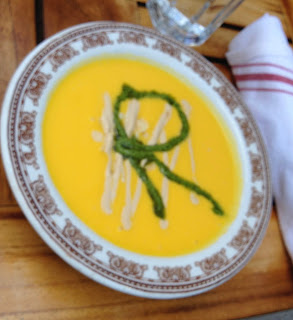 "We left out one very important thing: sex," said Beck. "One of the ways non-Judeo-Christian religions celebrate special occasions and honor the gods is through sexual orgies."
Exactly which religions are those, I wanted to know. Here was something more enticing than Watchtower magazine. But Beck drew a blank.
Anyway, the most popular is food, particularly huge home-cooked feasts. Food is a way for the moms and grandmothers to gather the clan and collect applause.
"The making of a feast is one of the symbolic ways women achieve honor in the traditional reading of life," he said.
And though that traditional reading grows blurrier every year, it is ignored at one's peril. You may think you're turning down slaughtered lamb flesh, or watching your cholesterol. But to mom, it's a personal attack.
"The Jews, along with all the traditional ethnicities in America, have a whole food thing going on," said Beck. "One of the big dramas around ethnic purity is the parents, particularly the mother, offering food and the kids refusing. There is a real symbolic struggle. The mother is saying: `If you don't eat my food, you're saying that you don't really belong to my world and I don't matter.'
"(But the child is saying) if you make me eat food, you're trying to undermine my adult authority, to infantalize me."
A tough call: Eat more than you may want, or flag yourself as standing apart from the tribe by refusing.
"You not only feel guilty, but forlorn by comparison to those bygone days when family was warm and held together," he said. "Feasts are the things that go down in the family annals."
That made sense to me. The dinners are what you really remember, as if the food were just a way of searing the occasion into mind.
"Absolutely right," he said. "Feasting is part of the sacred ritual homage to the family. You are taking the family's location and making it into a sacred space."
I asked Beck if, knowing as much as he does, he is able to resist the powerful pressures to eat more than is good for him, or does he find himself shrugging and giving into the strong cultural encouragement to dig in?
"The truth is I decide every moment," he said. "I'm poised on the knife edge. Sometimes I do. Sometimes I don't."
Join the club, professor.