We'll finish up my weeklong look at chefs with something special: this article from the September, 1986 issue of GAMES magazine was my first article written for a national publication. Games was on my radar because my college pal, Robert Leighton, had gotten a job there, nudging the publication into the realm of the possible for me. I began looking for something going on in Chicago that I could report on, and the U.S. finals of the International Culinary Olympics seemed an event they might bite at. They did. I ended up writing for GAMES for years, including an article on college pranks that led to my first book.
The Culinary Olympics is the model for "Chopped" and the many other TV competitions pitting chefs against each other and the clock. The event is still held: it'll be in Stuttgart in February, 2024. This story is long, though not bad for a 26-year-old novice, and I broke it into two parts, running today and tomorrow. 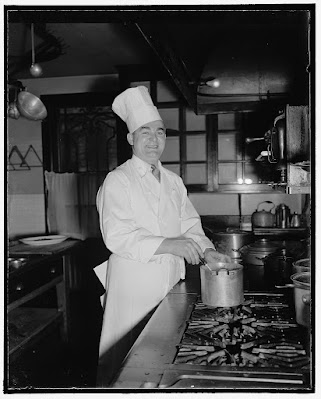 The 67th National Restaurant Association convention is a culinary madhouse. Tens of thousands of food industry types swarm over every level of Chicago's giant McCormick Center, gobbling free samples of TaterBoys, Tofutti, Koala Cones, and other snacks, clustering around booths representing such restaurant supply companies as Sani-Pearl, ThermaKleen, and Cut-Tel Automatic Faucets ("You never, never again have to touch your faucet....")
In one corner, separated from the hall by a row of seven glassed-in kitchens, pandemonium has been reduced to a quiet hum. Here some of the best chefs in America are competing for the industry's highest honor—a spot on the U.S. Culinary Team representing this country two years from now in the Internationale Kochkunst Ausstellung, or International Culinary Competition. Held in Frankfurt, West Germany, every four years since 1894, this "Olympics" of cuisine is the world's most prestigious culinary competition. In 1984, 60,000 visitors came to the Messegelande—Europe's largest single exhibition area—to watch teams from 28 countries compete. In addition to national competitions, some chefs also compete in various individual categories.
The U.S. first participated in 1956, and in 1984 American entrants won 27 gold, three silver and two bronze medals.
The finals in Chicago are a "hot food" competition, in which food is cooked, served, and then eaten. To quality, the chefs had to distinguish themselves at one of the five regional "cold food" competition. In the cold food contest, a variety of dishes—from huge marzipan dolphins to delicate fillets of meat and fish glazed in aspic and garnished with tiny curlicued carrots and potatoes carved in the shape of mushrooms—are prepared as elaborately as possible. The key is aesthetics, since none of the cold food is consumed.
"You get the most expensive food money can buy, then throw it all away," says Thomas Chaterall, executive chef at the Cherokee Town and Country Club in Atlanta. Because the food must be prepared and crafted all at once, the chefs work nonstop for several days.

"You can't imagine what it's like to stay up three, four days in a kitchen and to work constantly," says Michael Robins, executive chef at the Hilton in Altamonte Springs, Florida. "I had a chance to sit down and said, 'My God, I haven't sat down in 24 hours.' But it doesn't get any better than this—the highlight of a chef's career."
The entire process—regional competitions, finals, the two years of preparation for the U.S. team, and the trip to Frankfurt—is underwritten by the National Restaurant Association and the American Culinary Federation. The ACF is a professional organization that promotes the restaurant industry. The competition is held under its auspices, including the appointment of judges. 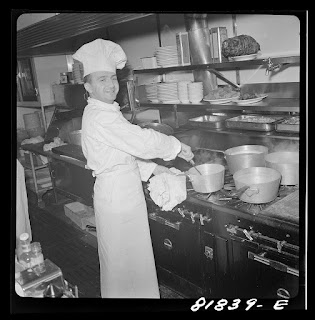 Thirty chefs, six of them pastry chefs, ranging in age from 23 to 46, made it to Chicago last spring. During the four-day finals, six chefs and one or two pastry chefs will occupy the seven kitchens each day. Each chef has only one chance to cook. The kitchens are replicas of the kitchens used in Frankfurt—professional gas stoves, large stainless steel refrigerators, rolling wire racks, and pots, pans, and utensils of every size and description. (The chefs, however, usually bring their own knives, setting them out in neat rows on towels, like surgeon's tools.) Six of the kitchens are identical. The kitchen used by the pastry chefs, who are judged separately, has two ovens in it.
Compared with the marathon cold food competition, the hot food competition is brief—a little more than six hours of continuous effort. The chefs arrive around 5:30 a.m. and are given a "mystery box" of ingredients that they must use to prepare their meals. Usually the boxes contain staples—fish, onions, poultry, beef—but one day they included nasturtium flowers. Not everyone gets the same ingredients, and the competition isn't so cut-throat that chefs don't lend each other a needed carrot or mushroom.
The chefs have half an hour to plan out a menu, which they then post on the door of their kitchens. After that, the race is on. Aided by a lone assistant from a local vocational high school, each chef must prepare 26 identical seven-course meals. Two are served to a panel of judges. The remainder are devoured by hungry journalists and other sponges. Lunchtime is 12:30 p.m.
Now it is a little after 8 a.m. on the last day of the competition and Daniel Hugelier, the executive chef at the Amway Grand Plaza Hotel in Grand Rapids, Michigan, is begging for cream.
"Just two cups Rich," he asks Richard Schnieder, a judge in the finals. Schnieder, a stern man in a white lab coat, at first tells Hugelier that he can't have any more cream. He's gotten as much as the others, and will have to make do. But Schnieder eventually goes off in search of more.
"He's always giving us a hard time," says Hugelier. "It's all part of the stress test."
The judges, six distinguished chefs, themselves veterans of dozens of foreign competitions, do not sit back and passively wait to make their evaluations. Rather, they are constantly in the kitchens, looking over the chefs' shoulders, taking notes. This inspection has two purposes: It allows the judges to rate cleanliness, usage, and procedure. And it lets them put a little extra heat on the masters of haute cuisine.
"If we noticed one chef is under great pressure, even if the food is good, we may feel he won't hold up under two weeks of intensive pressure in Frankfurt," says Baron Galand, president of the American Culinary Federation and judge.
Part of Galand's inspection includes sifting through the garbage. "I've already been through every trash can," he says. "Chefs can't be throwing good things away. If they're using mushroom cups, then we ask them what they did with the stems. Usage. That's what's important." 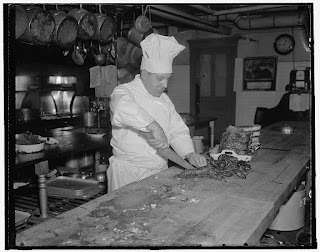 Ferdinand Metz, a judge with a thin mustache and a tight expression, walks into Lawrence Ryan's kitchen. Ryan, a department head at the Culinary Institute of America continues with his work. Metz looks into the refrigerator, takes a few notes, samples a green bean, and whispers something to Ryan.
Robins, who shows up every day to intently watch the participants, observes Metz through the glass. "He's giving him pressure, as much pressure as possible," he says. "He's doing it in such a way to see what his braking point is. Wants to see how he reacts to his authoritarian way of helping him out."
"There is very little difference between work habits and final product," Metz says later."I've very seldom sen people work sloppily and produce high-caliber results. Anyone can do something if they have time and leisure and no pressure. This is a pressure environment. here they have X number of hours, strange conditions, an unfamiliar kitchen. Can they do the same under these conditions?"
The judges talk tough, but in practice they go easy on the chefs, some of whom they have known for years. Schnieder returns to Hugelier's kitchen and silently places a single coffee cup, filled with foamy cream, on the counter before Hugelier, who looks down at it. "If my mousse is tough, you tell Ferdinand why," he says evenly. Schnieder shrugs and walks off. but a minute later he is back with a second cup.
Each chef copes with pressure in his own fashion. Ed Leonard, a plump, disheveled chef from Trusthouse Forte in Norwalk, Connecticut, sings happily to himself as he pulls the backbone from a duck for his Duck Soup Hudson Valley. Ruben Foster, a tall, handsome pastry chef, removes a tray of golden brown maple-leaf-shaped pastry shells from the oven, twirls on one toe with the grace of a dancer, and sets the tray down on the center table, gently kicking the oven door closed behind him. 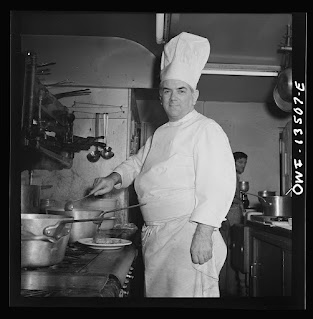 Chris Northmore, the pastry chef from the Parker House in Boston, chews gum like a pitcher. He wears a floppy cap over his strawberry blond hair, and is the only chef not to wear a toque, the cook's traditional starched white hat. On the counter before him are three bowls of varying sizes, and two scales. The bowls are filled with flaked white chocolate, and Northmore keeps pouring the chocolate from one bowl to another, grimacing, combining and recombining, and weighing the chocolate as if he were trying to solve a math problem. Finally a particular bowlful satisfies him, and he places it in a pan of boiling water on the stove. Immediately, he starts slicing strawberries. One strawberry yields eight thin, perfect slices. he arranges three slices in a champagne glass, nudging them gently into position. Then he steps back, jaw working away and appraises the glass at eye level, like a golf pro lining up a putt. Twenty-five empty glasses await on a tray nearby.

Coming Friday: Part II.
Posted by Neil Steinberg at 12:00 AM