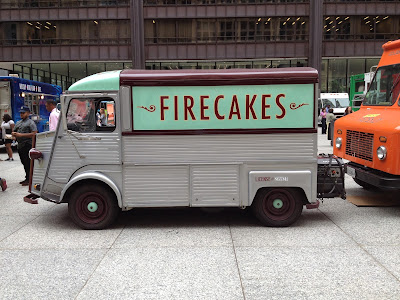 Originality is important in writing. If you seize somebody else's creative work, put a slight spin on it and feed it back to the public, well, you really haven't done much, and what you have done is bad.
In business however, what works for one entrepreneur might work for you, too, and the consumer won't really care. To fans of Pepsi, it doesn't matter that Coca-Cola came first.
Thus taking the long route from the paper to the train station Friday—I felt like wandering—I swung by Daley Plaza, where there was an odd circle-the-wagons ring of food trucks, including this cute little retro doughnut truck from Firecakes.
The moment I saw the 1968 Citroen, I thought how little and cute and retro and graphically  interesting it is. The moment after that I reflected that it is a rip-off of the Doughnut Vault little and cute and retro doughnut truck, which looks like this: 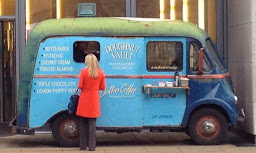 Well, it's a big city, and a couple more cute and retro doughnut trucks and it can be become a Chicago Thing, like hot pretzels in Philadelphia or sugared nut stands in Times Square.
I wrote about the Doughnut Vault's 1957 International Metro (a retro Metro!) at the end of 2013.
Firecakes, located at 68 W. Hubbard, rolled its truck out early this year, without of course mentioning anything about swiping the idea from the Doughnut Vault.
“This is an exciting next step for Firecakes as we expand our brand," Firecakes founder Jonathan Fox told the Show Me Chicago blog.

The pair of twee vehicles made me think of the George Rodrigue Gallery in New Orleans. Rodrigue made a name for himself painting bright paintings of a blue dog. They were sold out of a gallery in the French Quarter. Then up pops a gallery not too far away selling paintings of a red cat, complete with pompous artist's statement, explaining how he came up with the idea for the red cat. The gall of it lodged under my skin. It's one thing to rip somebody off; it's another to try to pass it off as a genius divination of your own.
Not to make too much of the little and cute and retro doughnut trucks.  To be honest, the whole doughnut trend has peaked, in my mind, and is beginning to lose its allure—it's not like they're pies and can be enjoyed forever without any diminishment of pleasure. I first fell in love with Doughnut Vault because of its small gingerbread stack cake doughnuts. But those are harder to find, and the few times I was forced to sample their  yeast doughnuts, I found them the standard oversweet, puffy and kinda gross fried dough you can get at Dunkin's.
Still, I went up to the truck and inquired about their doughnut line. My wife has been hankering for a particular kind of doughnut. Something perhaps impossible to find. A plain cake donut, soft in the center, kind of hard, almost crunchy on the outside. She says that Dunkin' Donuts used to make them, they had a little handle on them to hold onto while the doughnut was dipped into coffee. But they phased them out in the general ruination of the chain. So, full service husband that I am, I have been looking around for a basic plain doughnut for my wife. You'd think I'd find one at the profusion of doughnut joints around town. But no. Not yet anyway. Though it is, as I said, a big city, and I haven't given up.