Making up for lost time: The Goodman turns on the lights 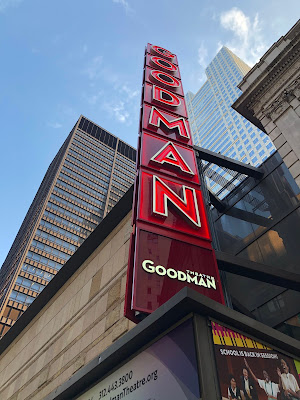 Well it is the theater after all. So it was only fitting that before we finally saw the play that was three days from debuting at the Goodman Theatre when the city shut down in March, 2020, creative director Bob Falls conducted a bit of dramatic business under the marquee Monday night, welcoming the audience back and turning on the lights that had been dim for a year and a half.
"After 17 months of darkness, it is such a. thrill to be here, to be relighting the lights of the theater and getting actors back on stage," Falls said.
Is it ever. The play, "School Girls; Or, The African Mean Girls Play," by Jocelyn Bioh, directed by Lili-Anne Brown, has a deceptively simple premise: a half dozen students at the Aburi Girls’ Secondary School prepare for a pageant that will point one toward the Miss Ghana contest and, perhaps, greater fame on the world stage.
I'm sure the Sun-Times will be reviewing it, so won't try to do so here, other than to observe that Ciera Dawn is exceptional as the queen bee mean girl, Paulina, the other standout being Lanise Antoine Shelley as the preening Miss Ghana, 1966, come to judge the girls, or, rather, impose her judgments upon them. The entire cast, though, is strong, with no trace of their performance having been interrupted by a year-and-a-half of global pandemic and disaster.
I wouldn't call the play a drama, because it's laugh-out-loud funny, but the comedy is cut by real humanity and a stark reminder that the racial psychosis we cope with every day in this country is also felt the world over.
The audience was masked and social distanced, and reminded before the play began to wear our masks before, during and after the performance.
"I'm not used to sitting in a theater with a mask," my wife said.
"I'm not used to sitting in a theater, period," I replied.
Ninety minutes later, having been completely captivated by the world of this school and the unique personalities of the girls in it, I realized just how good it is to be back at a performance.
"You can't make up for lost time," one girl says in the play, and another concurs: "The time is lost."
But you can sure try. 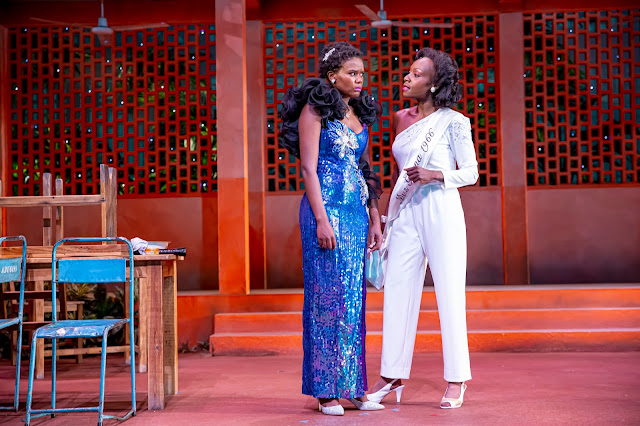 Paulina Sarpong, played by Ciera Dawn (left) wants to be Miss Ghana, the way Eloise Amponsah, played by Lanise Antoine Shelley, was. But will she make it? To find out, you need to see "School Girls; Or, The African Mean Girls Play" by Jocelyn Bioh, directed by Lili-Anne Brown, at Goodman Theatre until August 29, 2021. (Photo by Flint Chaney).
Posted by Neil Steinberg at 12:00 AM