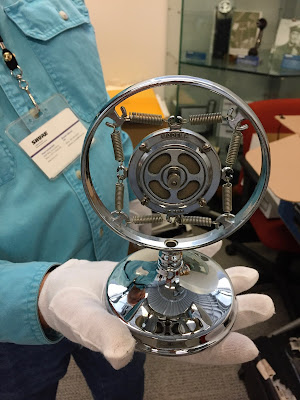 Monday's column mentioned the anticipated merger of the Chicago Sun-Times and WBEZ which, while it has been reported, still flew under the radar for some readers.
"I missed that completely!" writes Robert Nanni. "I infer from your writing that you are in
favor."
I wrote him back that indeed I am. While I haven't been on the station much in recent years, I've been reporting on WBEZ longer than I've been on the staff at the paper. When I was a mere egg, in my mid-20s, trying to find a fingerhold on Chicago media after being unceremoniously fired as the opinion page editor of the Wheaton Daily Journal, I started doing regular segments on Ken Davis' show, Studio A, beginning in January, 1986 when I was dubbed, with a healthy sprinkle of irony, their "World Correspondent" and spent most of that year wandering the world of Chicago, an assignment for which I was paid nothing—a reminder that the Internet didn't create the phenomenon of news organizations taking advantage of ambitious young people willing to work for free. The shtick was that once a week I would pop up on the phone in from someplace unexpected.
My first broadcast was buck naked, from a sensory deprivation tank at Space Time Tanks on Lincoln Avenue—a fad at the time. I floated in total darkness atop warm, heavily saline water, waiting for the call. For about an hour, at one with the universe, an amoeba  on the calm surface of an antediluvian sea. Serenity settled in, just before the door ripped open, there was a blinding light and a draft of cool air, someone handed me a phone and Ken Davis asked me on live radio what I had been thinking the moment before he called.
"That I ... had to go to the bathroom," I said, frowsily. "Wondering whether I should crawl out of the tank or wait until after you called."
Somehow they liked it. The next week I broadcast from a pay phone at an early morning bar, Tiffany's, in Cicero, after a wake-up shot and a beer—such places were in the news at the time.          Other vignettes followed, almost random except they were all odd: watching a chicken being slaughtered at John's Live Poultry, its throat slit, the poor bird then dropped headfirst into a galvanized funnel, a thin stream of blood running out the bottom, it's claws scratching futilely on the metal. Northeastern's Human Performance Lab, checking in from a treadmill while undergoing a stress test. From Ragdale, the writer's colony in Lake Forest, where I had gone to finish a novel, a bit of which I obliviously read on the air. From the table of an acupuncturist. From the Playboy Club. That June, from inside the scoreboard of Wrigley Field during a game. Looking at the enormous water cooling system in the attic of the new State of Illinois Building.
Being live radio, my segment didn't always work. For April Fool's Day, I tried to do a broadcast that was from an entirely white room, supposedly, which struck me as a clever idea. But it fell flat. A few weeks later, I was in the lab of a Chinese engineer working to turn moon dust into concrete for NASA, but the laboratory's switchboard didn't put the call through. To top it off, I walked outside and found I had locked the keys in my car. I was 25. I had to return the following week.
The broadcasts became so routine that some days I merely noted "WBEZ broadcast" or "WBEZ" in my 1986 Waterstone's Literary Diary.
Once Ken phoned me at some ungodly hour—3 in the morning say—and ran a tape. I was so composed, talking with him, that listeners later thought I must have had advanced warning. But I didn't. I was just quick-witted and willing to play along. Still, as the efforts of the young so often do, the whole effort really didn't go anywhere, and eventually we parted ways and I went into newspapering, which paid far better. Some people get their foot in the door and become David Sedaris. Others become, well, me. Still, I remember it being fun, and kept going back to WBEZ over the years—for a while, Eric Zorn and I were regulars on Fridays, recapping the week's news. I know we were hoping to become a cherished radio item, but that never happened either. Given that track record, I can't imagine the station is tapping its foot waiting to get me back on the air, not that I would let that stop me. What's the T.S. Eliot line? About those "who are only undefeated/Because we have gone on trying." Yes, something like that.