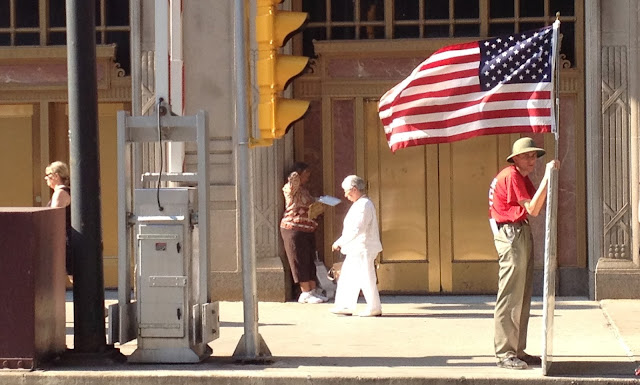 The Christian army is winning in Texas, where the state legislature just passed a deeply-cynical law severely restricting abortion clinics, under the sham goal of improving medical care for women.
Once, such an infringement would have sent America's feminists howling to the ramparts. Now, lulled and lazy, sated on their long-held, though steadily-eroding medical rights, they mostly shrugged while Texans duked it out, content that it isn't their state, not this time, not yet.
Being against allowing other people to decide whether or not to have an abortion is a religious scruple. Albeit one so successful that few even put the issue in those terms. But that's what it is—religious oppression disguised as baby welfare. This fight didn't come from nowhere, but rather is the latest battle in a very long war. The same pious demagogues who once raged against pre-marital sex, against masturbation, against women voting, then working, then serving in the military, suffered their defeats, fell back, and drew the line, right here, where they continue their age old struggle to force their religion on others, aided by an army of imaginary babies.
A fetus isn't a baby. It's a proto-baby, usually the size of a grain of rice when most women decide to abort it, assuming they can find an available clinic, a proposition that grows dicier with each passing year.  We demonize mullahs in the Middle East for forcing girls out of school, then yawn as our own homegrown Taliban compel women here to be mothers whether they want to be or not.
These thoughts were swirling around my head, inchoate, as I hurried down Wacker Drive to the train late Monday afternoon. The sun was fierce. Then I turned the corner and saw the Pro-Life Action League is back, laying siege to rush hour Madison Street as part of its nine-day summer campaign, brandishing 5-foot tall posters of chopped-up fetuses, the size of giants. A literal magnification of the fetus -- literally dwarfing the tiny women who would might prefer not to give birth to them.
I was just clicking into my frantic commuter mode, going into overdrive, head down, and powering around them, when out of the corner of my eye I noticed a tall bearded man in a straw hat -- a little older than when last I saw him, but who isn't? I recognized him immediately, and stopped in my tracks.
"Joe!" I said happily.
"I thought that was you," said Joe Scheidler, 85, father of the Illinois right-to-life movement, as staunch an opponent of a woman's right to decide as ever breathed. We  beamed, and shook hands heartily, catching up on things, like the old friends we are. I told him how good he looks. He expressed wonder that my boys are as old as they are. The eternal optimist, I couldn't help ask him what was on my mind.
"You have to admit, that being against abortion is a religious scruple," I said.
"I wouldn't say, 'scruple,'" he replied. "It's in the Bible, part of the Ten Commandments: 'Thou shall not kill.'"
"....a person," I added.
"A baby is a person," he said.
"A fetus isn't a person,"  I parried. "I wouldn't want to take one to the movies."
"The mom could go to the movies," Joe countered. I glanced at my watch: 5:01 p.m. There didn't seem much point missing the 5:12 so I could debate the personhood of a fetus with the founder of the Pro-Life Action League. Besides, it's a conversation we've been having for a very long time, with surprising cordiality. This isn't the first time we've bumped into each other on Madison Street.

CUE THE PRO-LIFE ACTION LEAGUE
Morbid thoughts. And all this humidity, grinding me down. "The day smells like a wet horse,'' I complain to my wife. The people in the street, surging and pushing around each other. They seem . . . ugly. Sweaty women with flabby arms in strap t-shirts, bald men in tight, creased suits, moles on their faces. The buildings even seem hazy, insubstantial, as if the city -- normally so splendid -- were all a dream and not a good one.
I have a rule that if the world begins to look bleak: remember that the problem is not with the world; it's with me.
Buck up buddy, I tell myself. Snap out of it. I walk over to Field's to meet my brother for lunch. Scan the surroundings, hoping for something to cheer me up, but it is just one big dank overlit mundanity. Where are all the bright shop windows? All the pretty girls in their summer dresses? Instead, only cracked sidewalks and tourists from Moline in Lycra slacks.
Please God, I think, send something cheery.
I cut through City Hall and stroll along the south edge of Daley Plaza.
The entire length of Washington is taken up with a dozen anti-abortion protesters, in a straight line, each holding the same 5-foot-tall poster showing a pair of tongs holding the bloody, decapitated, jawless head of a fetus.
Did I ever mention my Malign God Theory? I don't think so. Briefly stated: There is a deity, and He does hear our prayers, but often acts perversely, for His own amusement. Feeling a little down? Fine, sayeth the Lord, maybe this will perk you up! Cue the Pro-Life Action League.
It is so over the top, I have to smile. Grinning, I turn my face, away from the grisly horror, and see a group of short Asian men in bright tribal uniforms -- long coats, round hats. A banner reads "Mongolian Day in Chicago." A stage, tents, chairs, already occupied by aging relatives, booths of some kind.
Now I'm smiling broadly, chuckling to myself. These poor people. Bet they planned for six months. Rehearsing ancient dances. Eager to reflect Mongolian pride, to see a neglected people shine in the public square. Our city's first Mongolian festival.
The great day arrives. They show up -- take chartered buses down from Waukegan, no doubt, enticing their families and friends along. Only to be confronted by platoons of grim, lipless yokels and gimlet-eyed, corn-fed fanatics, waving huge color photos of chopped-up babies. Whoops ... fetuses.
Gotta love it, life in the city. I waggle my finger at the sky. Give the Big Guy credit -- He has a sense of humor. The rest of the day turns brighter from that moment on.

PLUS THEY WERE SOCIALISTS


Now it's the end of the day, and I'm hotfooting to the train. And there is the Chopped-Up Baby Poster crowd, again, having relocated to the corner of Wabash and Madison, lest I miss them.
I'm about to blow by, when I recognize my old friend, Joseph Scheidler, holding a 5-foot-tall poster of Jesus, a chain of red crystal rosary beads wound around his fingers.
"Hey Joe!" I exclaim.
"Hi!" he says, warmly. "I read you -- you're always wrong, but I still like you."
We beam at each other. We have spoken in the past, and enjoy an unusually good relationship, considering that I view him as a religion-crazed zealot conspiring to trample on the rights of women, while he sees me as a hell-bound sophist stained red with the blood of murdered innocents.
"How's it going?" I ask.
“We're winning!’ he says, reporting that while in past blanketings of downtown, they would get a lot of abuse and obscenity, this time passersby are more sympathetic.
“We're finding more thumbs up!” he says. “More 'keep up the good work!'”
I have to ask him something.
"I've always wondered, Joe," I say. "Do you worry about parents bringing their children downtown? About them passing your signs as they take their daughters to the American Girl store?"
"Not much,'' he says, then adds brightly: "We've picketed the American Girl store! Children are naturally pro-life. They ask their parents if that's a doll, and if the parent explains the truth to them, it doesn't hurt 'em. I have 15 grandkids and they love to come out here.''
A few pro-choicers are standing next to Joe, and I talk to them. One holds a sign reading "My Body, My Choice." She chooses not to give her name, and isn't exactly aflame with her cause, anyway.
"It's still legal and we'd like to keep it that way,'' she says.
Tepid stuff, next to Joe's glittery-eyed verve.
That's the problem with the whole conflict. There's no balance. On one side you've got guys like Joe Scheidler, practically a biblical figure, John Brown holding a staff and spreading his arms over bleeding Kansas. On the other, you have bland rationality under the by-definition indecisive banner of "choice" ("hmmm, which one, let's see . . .") afraid to give their names and lacking anywhere near the passion their opponents possess. It hardly seems a fair fight.