Richard Branson is taking a bath 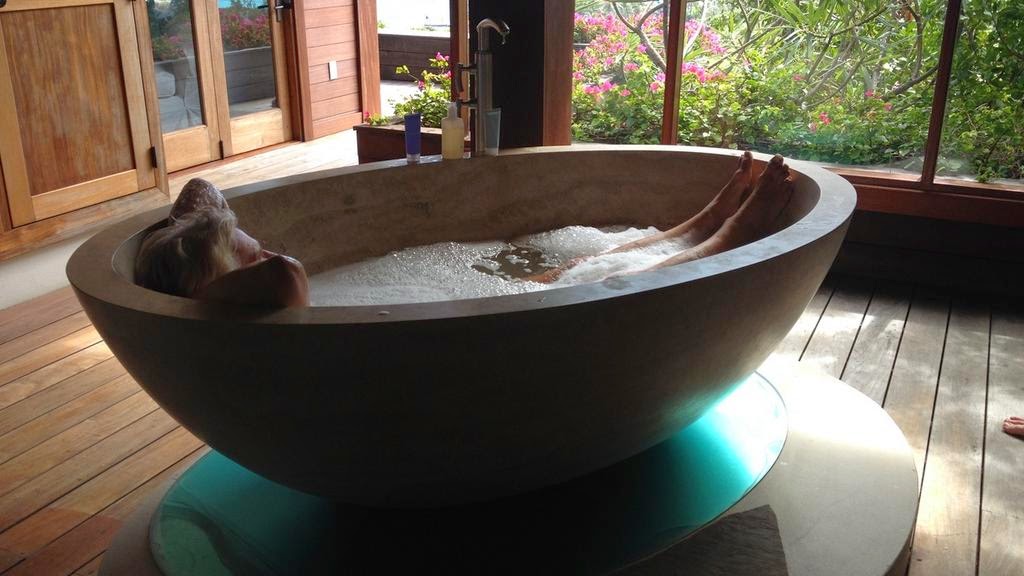 Richard Branson is taking a bath.
Or was, 23 minutes ago.
I know this as a fact because he tweeted a photo of himself, in the tub, discreetly shielded by bubbles, thank God.
“Right now I’m delighted to be alive and to have had a nice long bath,” he wrote.
Oh wait, “had”—the bath might be over by now. In fact, by the time you read this, the bath is certainly over. Let’s start again.
Richard Branson took a bath.
In a lovely, oval shaped Turkish stone tub that probably set him back $20,000. But the billionaire owner of Virgin Airlines, Virgin Atlantic and hundreds of other companies in the Virgin Group can certainly afford it.
Thursday morning he tweeted that message and photo; you can see the nice slat wood of the bathroom, a hint of green—Necker Island?—through a window, to his 4.27 million followers, including myself.
The photo is what got me thinking. Somebody else had to take it.  It’s not a selfie. An assistant no doubt. “Snap me in the bath, Reginald, and we’ll alert the masses.”
But I don’t want to mock Branson; a nice, exuberant man, by all indications. Three years ago he came to Chicago to promote Virgin Airlines and rode the Blue Line in from O’Hare, giving free tickets to San Francisco to those riding the L with him.
“Life is much richer if you say ‘yes’ than if you say ‘no,’” he told the Sun-Times.
So an affable fellow, as far as tycoons go. He describes himself on his Twitter account:
“Tie-loathing adventurer and thrill seeker, who believes in turning ideas into reality.” (Were I his media consultant, I’d lose the “tie-loathing” since it dates him, a blow struck in a battle that ended long ago. He might as well say, “white tie loathing” at this point. The younger generation never had ties to loath, judging from the kids packing the elevators in our building: t-shirts, cargo shorts, sandals. Not much left to hate as a workday imposition, though I suppose they’ll find something.  “Dude, I’m so glad to be out of those flip flops I had to wear to the office,” they’ll say, running barefoot on the weekends. “My big toe felt so isolated...”)
Not that I blame Branson. We live in an age where....

The rest of this post vanished during one of the Sun-Times rejiggerings of its computer system.