Before we focus on tether ball....

Hmm, that really doesn’t work, does it? Too piratey. It’s supposed to be the visceral cry of dismay that welled up inside me Thursday reading Sandra Guy’s piece in the Sun-Times about the Metropolitan Planning Council, which “invited people to submit ideas” to improve Union Station.
Maybe, “ayiiiiieeee!!!” No, that’s something a peon screams as he falls off a fort wall in an old Sunday afternoon action flick.
The ideas the council is exploring are widening commuter platforms, more off-street parking for buses, plus tether ball and yoga in the Great Hall. They want Union Station to be a “destination, rather than just a place people pass through.”
Have these guys been to Union Station? How many ideas for its improvement did they receive? Because I have a few, and these are just the ones that occurred to me in the five minutes between when I got off the 7:54 a.m. Milwaukee North line train and the time I finally shuffled my way to air and daylight through the Madison entrance:
1) Instead of trying to make Union Station “a destination,” try to make it a place people can get out of quickly. How about reconfiguring the the platforms so people who get off trains can actually exit in real time? So they aren’t forced to wait in enormous, legion-of-the-damned lines next to the ear-splitting, soot-belching train engines? How about a thick concrete wall for aforementioned engines to tuck behind upon arrival so that the passengers a yard away will have some protection from the noise, heat and smoke?
2) How about signs, telling Ma and Pa Kettle, arriving from Booneville with Pete, their pet chicken, that Madison Street is one way and the station is the other? Not the dark placards tucked under the ceiling where they can barely be seen. Put them on the pillars. And paint those pillars a color that isn’t the current gray canvas for filth.
3) How about cleaning the place? How about finding a way to keep the cataracts of sewer water from dumping on the heads of people on the platforms? Or does that represent suggestions so subtle and unattainable they’re beyond the long-range vision of the MPC? Did nobody mention them? Did anybody suggest perhaps the whole urban transit experience might be enhanced if, every time it rains, Union Station didn’t start peeing on our heads as we wade our way across these Stygian platforms? Nobody?
Done? I’m just getting started. How about putting computer screens on the platforms, like half the L stations in the city, so people don’t have to walk a hundred yards back into the station to find out when their trains are coming? How about a public address system that works, that isn’t a mumbly blurt of static? Last winter, one day when most of Metra shut down because — who could have predicted? — it got cold in Chicago, they had conductors with bullhorns giving updates.
I was in midcry when some frayed journalism nerve ending quivered, demanding I call the council to ask how they could be so blind. Short answer: They’re not.
“The effort started with an acknowledgment that Union Station today is at capacity,” Peter Skosey, the councils’ executive vice president, said. “It’s jam-packed, hard to get on and off the trains. That’s why three years ago, partnering with CDOT, we created a Union Station master plan, a series of thoughtful improvements.” Wider platforms will permit escalators to scoot harried commuters to the streets above.
Music to my ears. I don’t want to be the guys who demands perfection before the details are improved. And I do have a bias against planning councils. Why? Maybe the five years on the editorial board. Made me testy, listening to these groups lay out their airy Vision for the Future, which always seemed to involve a monorail circling the six-county area, and as they’re presenting the artist’s rendering of the proposed mag-lev train, you raise a finger and ask, “Given almost nobody rides Pace buses, where’s the pressing need?” They just look at you.
So yes, by all means, plan. Dream big. Commission studies. Why have the Great Hall be a place where you only go to point out where that scene in “The Untouchables” was shot, while a handful of forlorn families kill time between trains in the distance?
But in the meantime. Two workers on a ladder could put up plastic tarps to divert the water. Any high school art class could design far better directional signs than they have now, and produce them all in an afternoon, using tagboard and Sharpies. Give somebody a mop and a broom. Forget lingering; right now Union Station isn’t a place people want to rush through. Change that quickly. Then we can talk tether ball. 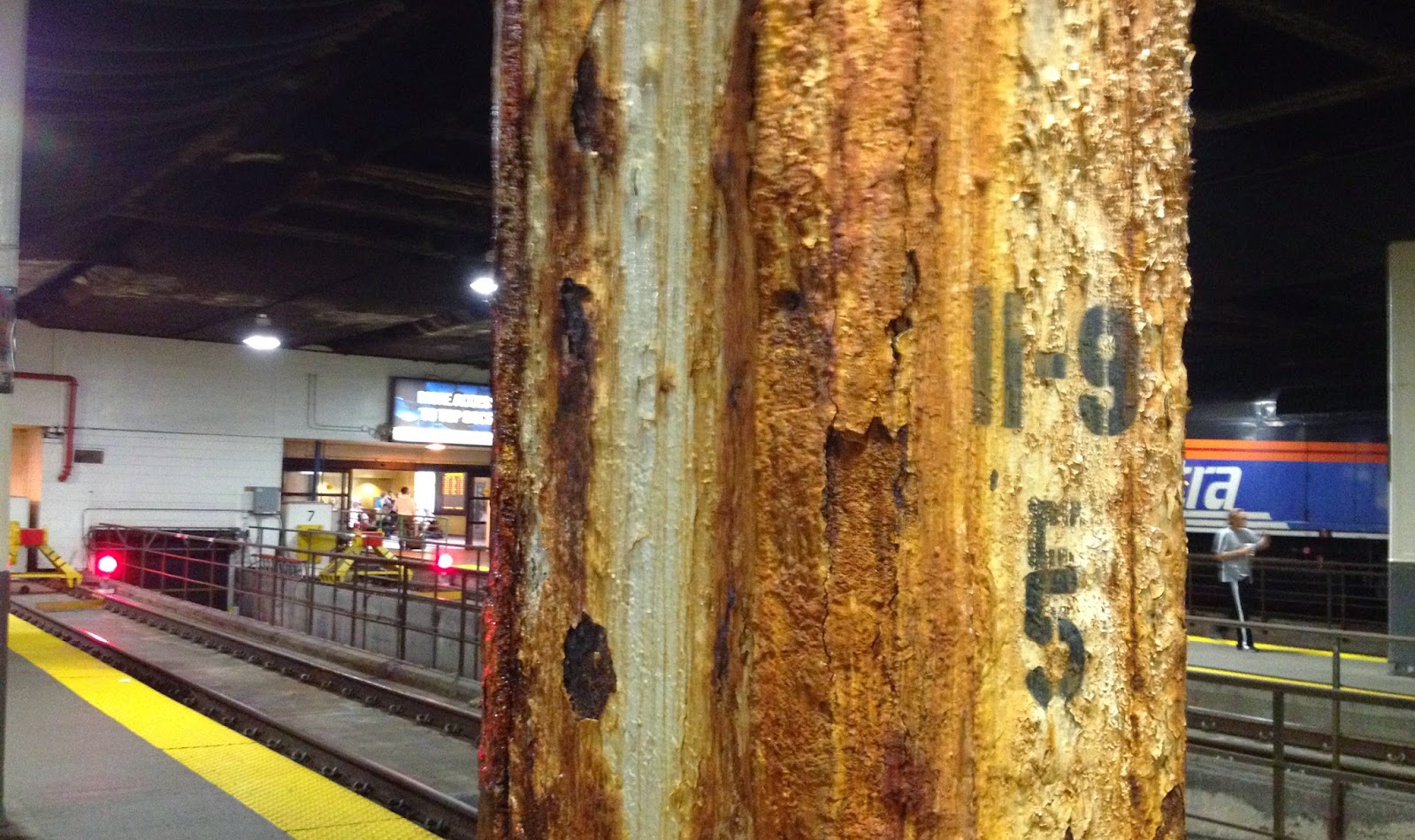