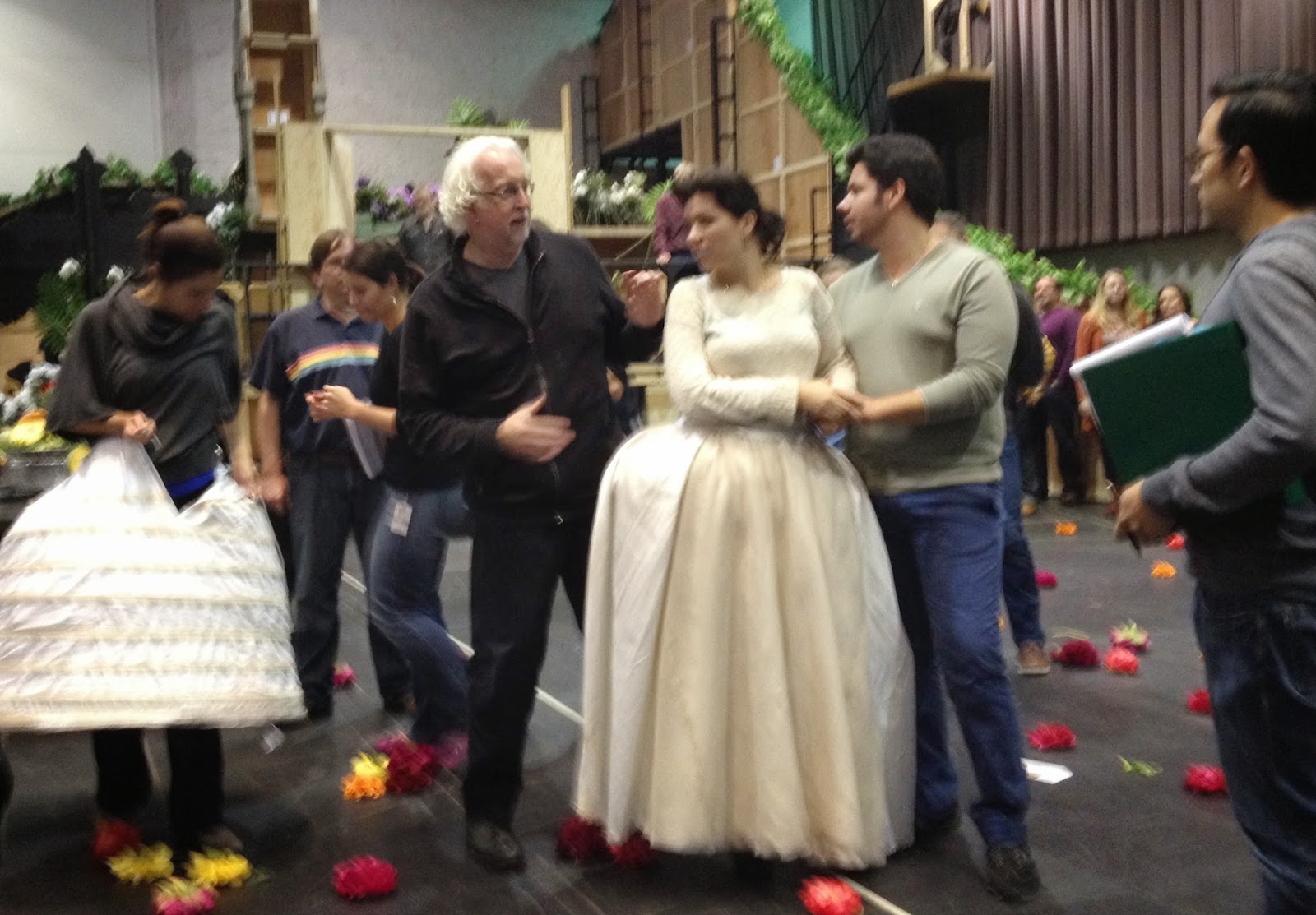 But what I really want to do is watch Bob Falls direct ...  I've been asking for years, at both the Goodman and at the Lyric. For some reason now the clouds parted and I got my chance. I wish this piece could have been longer—he's such an interesting man. But I'm glad I was able to get this in the paper.

Don Giovanni is not your average hero. Serial seducer, rapist and occasional murderer, he gets by on his good looks, his money and a relentless, serpentine charm.
Nor is Robert Falls your average director. Provocateur, trickster, his productions have a sharp contemporary edge and lots of good old-fashioned violence and sex. His “Measure for Measure” last year at the Goodman, set in 1970s “Taxi Driver” New York, left audiences gasping and angry. A critic denounced his 2006 “King Lear” as too grisly. Falls reaches into the body of a work, draws out its essence, twirls its guts on a stick and thrusts it in the audience’s faces.
Needless to say, I love it. If I wanted the drip-drip-drip of tedium, I’d stay home.
“You were born to direct this,” I whisper to Falls, joining him last week in the Lyric Opera’s second-floor rehearsal space for the first full run-through of Mozart’s “Don Giovanni,” this season’s first show.
“It’s the ‘Measure for Measure’ of operas,” he agrees. “Sex, drugs and rock ’n’ roll. It never stops; the perfect opera in many ways. Starts like a bat out of hell, with an attempted rape and a murder. Here’s five sequences of violence and gun play — because it’s set in 1920s Spain. The singers are unbelievable; they’re running, fighting, kicking.”
Watching Falls in action — if “action” is the right term for a man mostly sitting, grinning, jotting on a pad — you quickly scrap cliched notions about what a dynamic director does. Falls is no tyrant bullying his cast. He listens as much as talks, if not more.
“It’s a total collaboration,” Falls says.
Donna Elvira, played with ferocity by Ana Maria Martinez, appears pushing a gleaming vintage motorcycle and side car.
Falls wanted her to cut across in front of the motorcycle, but her instinct is not to. She asks Falls if that’s OK.
“Whatever you want to do,” he replies.
But a moment later he is up on his feet, the motorcycle is coming in too much. “It’s too far; it’s never been that far,” he says.
So a balance. Sometimes his vision, sometimes the performers’.
This isn’t the cast’s first rodeo. Polish baritone Mariusz Kwiecien has played Don Giovanni in 19, count ’em, 19 previous productions. Yet he’s learning from Falls.
“He is from outside the opera world, bringing new fresh ideas,” Kwiecien says during a break.  “Sometimes I wouldn’t even think of this kind of interpretation for that aria. He is pushing us to try, and when we try, we are discovering absolutely new dimensions. He is open to new ideas, and recognizes good and bad ideas. So do we.”
When Don Giovanni and ex-lover Donna Elvira spar, Falls beams, looking around as if searching for someone to marvel with at a wonder. “I do like to share it with everybody,” he says. “I love this because they know it so well, yet are still fresh and open.”
Falls is the longtime artistic director at the Goodman, and if you’re wondering what he’s doing here, thank Lyric general director Anthony Freud, who tapped Falls the moment he joined the Lyric.
“I knew about him for many years because he’s a major international director,” said Freud, who was in Chicago, interviewing, when he went to see Falls’ 2010 “The Seagull” at the Goodman. “I was incredibly impressed with it. Really extraordinary. I’m someone who believes passionately that the best opera is the fusion of music and theater.”
The music is ethereal — “supernatural,” my opera dictionary calls it — but Don Giovanni, well, he’s a bad man. I wonder: We’re all so touchy, what if the Lyric’s audience doesn’t like this guy?
“Do you like Tony Soprano?” Falls asks. “Do you like Walter White in ‘Breaking Bad’? Do you like Don Draper? We’re living in such an era of antiheroes, where horrible soulless people carry a television show for years. I don’t really care if you like Don Giovanni. Personally, I think he’s a soulless, heartless, somewhat monster. That’s the point, for me, to kill the romanticism. Trying to balance the comedy and the violence with the seriousness is what makes it exciting.”
Well, exciting, except for one brief patch at the end of Act One.
“In an hour and a half first act, there’s one 60-second dullness,” Falls frets. “Giovanni is trying to get Zerlina to go to the party and Masetto doesn’t want to go. It’s just dull. It just sits there. The first act is constantly in motion, constantly moving — snaps — and we get 60 seconds that stop. Partly because I was trying to do something and the actors thought it was so stupid they said, ‘Eh, I don’t want to do this.’ ”
Falls wanted them to join hands, nine days ago, but Kwiecien rejected it: “I hate Masetto, why would we join hands?” Falls now huddles with his staff. “I don’t know yet, but my brain trust is working on it,” he says. They have a little time. “Don Giovanni” opens Sept. 27.
Posted by Neil Steinberg at 12:00 AM