Saturday Fun Activity: Where IS this? 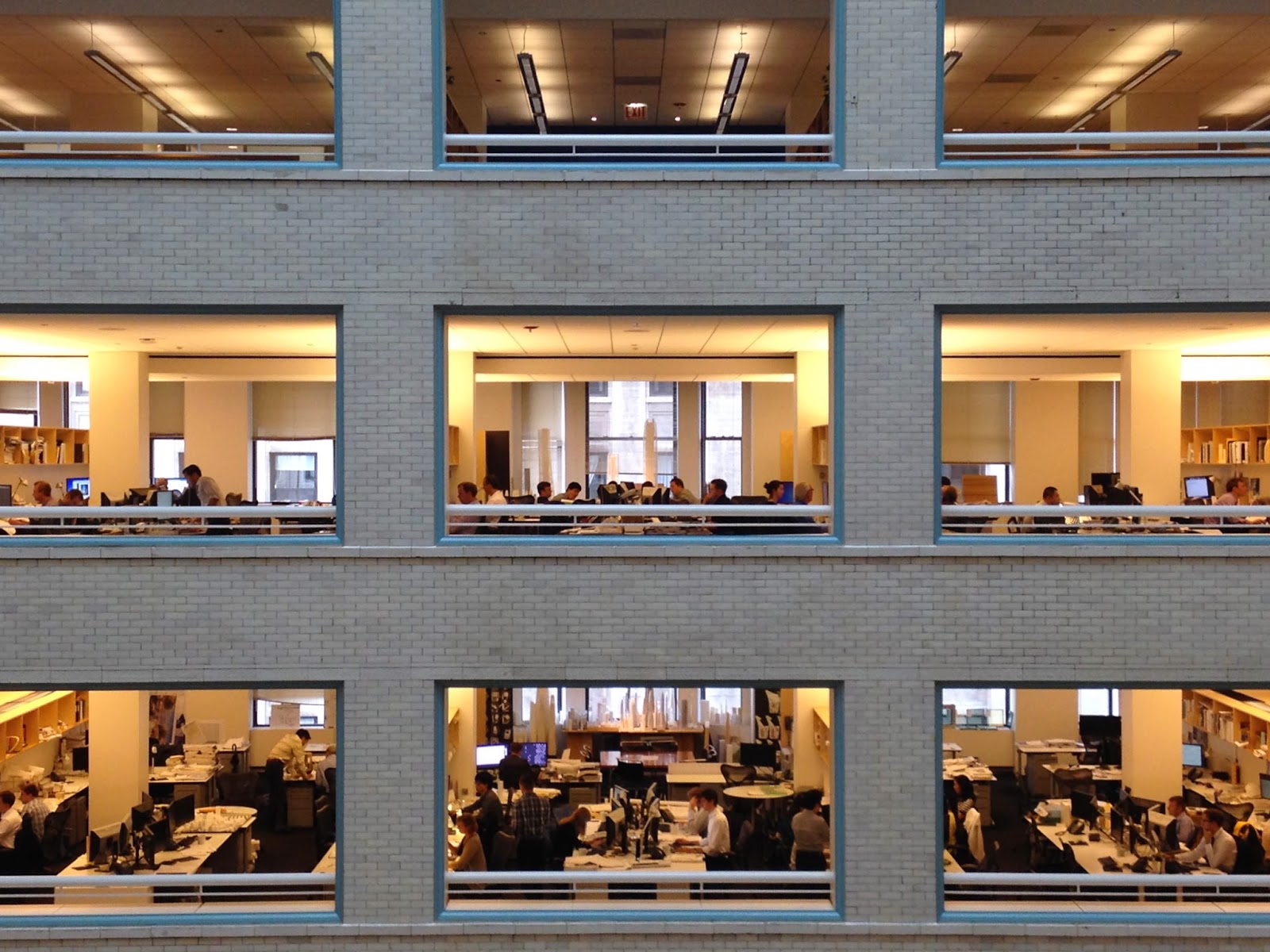 "Voyeur" is a negative word, implying some kind of illicit sexual gratification or cruelty in observing others. Which is a shame, because there is an innocent pleasure, too, in watching other people go about their business. It seems to call for a word of its own: "observer" is too neutral, "witness" too legal.
Whatever the term, I was taken by this office tableau, viewed from an interior courtyard during my wanderings this past week. I didn't watch them long, but there was something serene in seeing these people silently applying themselves to their tasks, oblivious of me.
Where is this grid of windows? What business are we glimpsing? The only hint I'll say is, well, it's one of Chicago's more famous companies, and if you look closely, there's another hint.
A special prize this week—oh, if you are the guy who is supposed to collect the Kup street sign, email me back; I noticed you sent a query, trying to set a time and then the email vanished into the aether. The sign is still yours for the taking.
Where was I? Ah yes, a special prize. This little guy. No need to pick him up; I'll mail him to you. He's something you just can't buy in stores, at least I've never seen it. A teddy bear, dipped in wax—cinnamon-scented wax. It has been gracing my office for the past eight years, usually in its protective plastic bag, to keep me from suffocating on his aroma, but I liberated him for photographic purposes. He really is quite distinguished, and has an interested provenance, as you can read from the clips below.
So place your guesses in the comments section. Good luck. 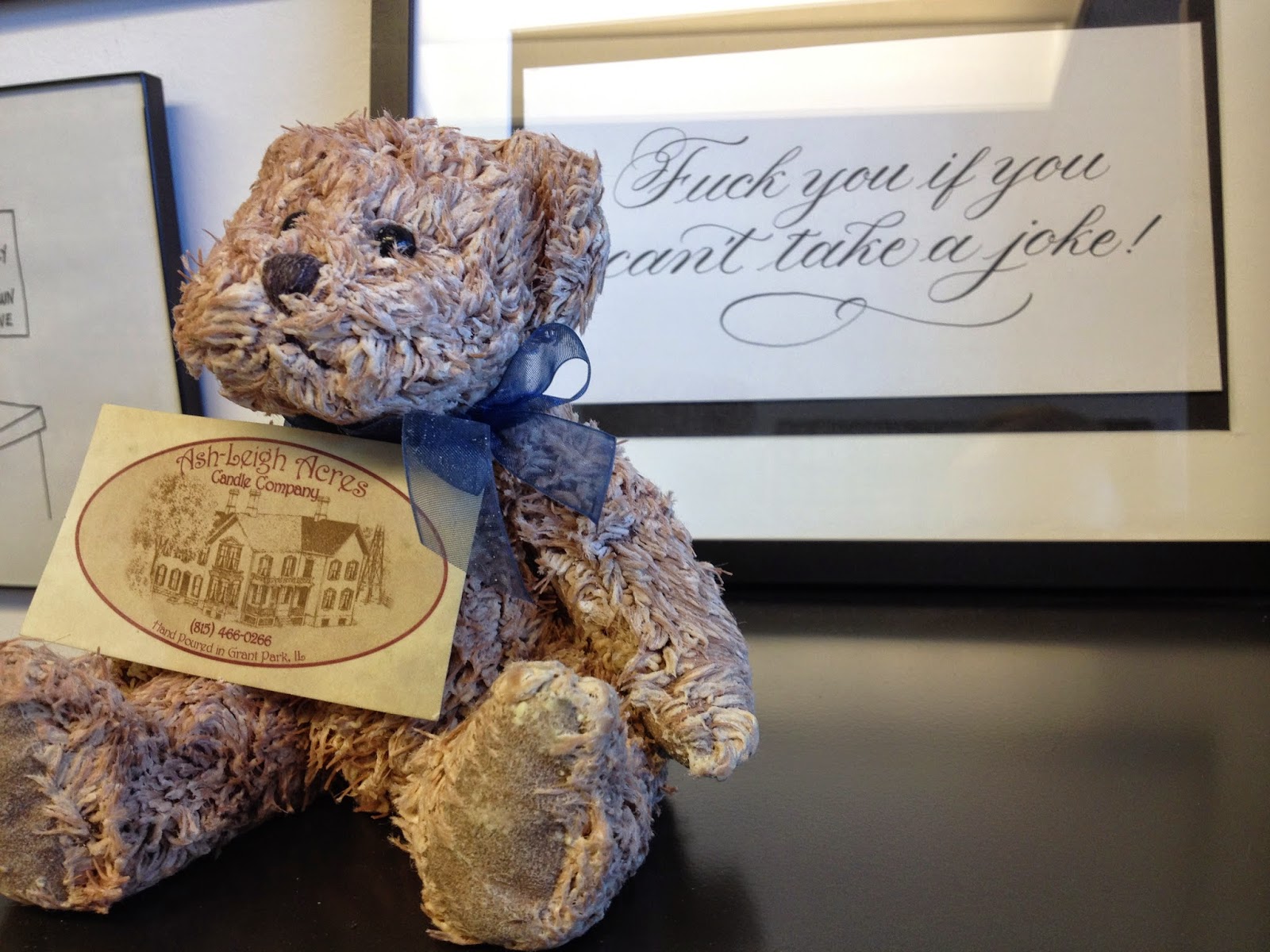 YOU CAN'T MAKE THIS STUFF UP
God, I love this job. Sometimes, anyway. Because you can start out one place, and quickly be projected somewhere very, very different.
As you can imagine, my columns on immigration provoked a blizzard of feedback. I read most everything -- unless the author was being too much of a jerk -- and generally found them thought-provoking.
One reader, in the middle of a lengthy analysis of the immigrant situation, offered up a paragraph that leapt out for reasons that have nothing to do with politics.
"Now, I wouldn't feel so bad about illegals if they worked a fair wage like everybody else, in other words, even the playing field. If they spoke English, so when I go to the thrift store and ask a Spanish lady, 'Where are the teddy bears' she would know what I'm asking instead of saying, 'I no speak English.' "
The obvious reply, which I sent to the reader, was: "You buy teddy bears at thrift stores? For whom?"
I had the image of Aunt Betty, the family crank, showing up at her nieces' birthday parties with one of her famous ratty Salvation Army teddy bears, wrapped in an old newspaper comics section. Reality dwarfed my pallid imaginings, however.
"Occasionally I do crafts . . ." the reader wrote back, with what I felt was a trace of sheepishness. ". . . and I needed teddy bears (cheap) for waxed dipped bears."
We had sailed off into uncharted waters, at least for me.
"Wax-dipped bears?" I wrote back to her (I assume the reader was a woman. At least I hope so). "I can't imagine that. What are they used for? Can you send me a picture?"
The reader sent me a link -- www.wicks-wax-scents.com/wax-dipped-bear.html -- that teaches you how to dip your own teddy bears in hot wax, to create decorative, nice-smelling wax bears that you can then dress in party clothes and whose scent you can refresh with a hair dryer.
Make no mistake. I'm not ridiculing the practice. That would be too easy, not to mention cruel. There's something about crafts -- about making angels out of folded-over copies of Reader's Digest topped with Styrofoam balls and spray painted gold, or pebbles decorated as owls and glued to driftwood -- that removes them from the realm of criticism or even of objective thought.
No, I'm sincerely amazed. I've been living my life all these years, brewing coffee, raising children, writing stuff, riding the train. And all this time, unbeknownst to me, people have been melting wax in enormous vats, pouring in the cinnamon and clove, then lowering cut-rate used teddy bears into the bubbling brew. God bless America.

I must admit, after I wrote about the phenomenon of dipping teddy bears in wax as a craft project, I assumed somebody would send me one—it was the kind of marvel that cried out for what Othello called "the ocular proof."
When the weeks rolled by and no bear arrived, I felt a pang of disappointment. Then . . .
"Package for you," said Rich, who handles the mail for the editorial page.
"Probably a bomb," I muttered, standing up to open it. "Cover your  face."
It turned out to be a wax bear.
The bear was nothing like the waxy ursine horror of my imaginings.  Quite delicate, a color and texture as if it were made of cocoa-flavored coconut.
Of course, this was no stovetop amateur effort, but the work of Ash-Leigh Acres Candle Company, which is actually Stephanie Loitz  of Grant Park, Ill.
"No, we don't live in the park," she said laughingly, from her home  50 miles south of the city. "We have a little farm."
She sells the things -- the smaller version, which is quite cute, costs $12, and can be had by e-mailing her at jlsl95@sbcglobal.net.
But I should warn you: They're scented. I'm keeping mine in the bag.
Posted by Neil Steinberg at 12:00 AM