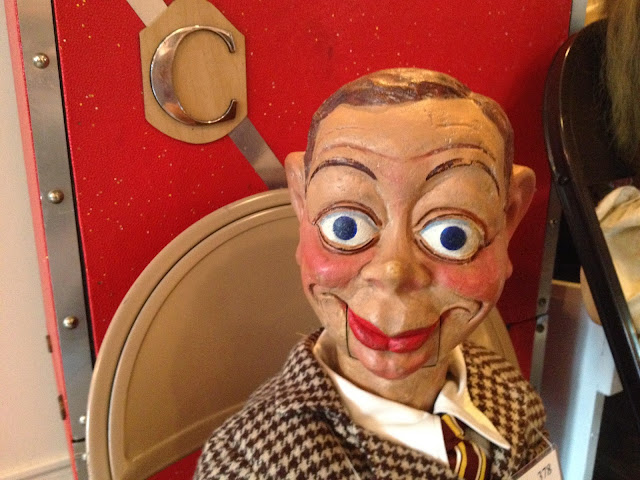 FORT MITCHELL, Ky. — What makes something strange? And why does strangeness draw us in and grip us so?
That is a mystery. 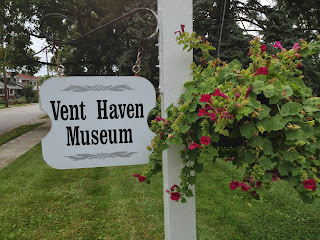 Something made my wife, a few months ago, standing 300 miles northwest in the gift shop at the Art Institute of Chicago, pick up Matthew Rolston’s Talking Heads: The Vent Haven Portraits, a foot-square coffee-table book containing close-up portraits of some of the 800 ventriloquist dummies at this museum.
The intimate, unsettling photo on the cover grabbed her, enough that she lugged the 5-pound book over to me. I flipped through it and agreed when she later suggested we detour on our road trip through the South to this small town, spend the night, then tour the private museum.
Credit Lisa Sweasy, the curator of the Vent Haven Museum. I don’t believe a person walking through the cluttered rooms alone, trying to meet the unblinking gaze of those hundreds of dummies and disembodied heads, glancing at the photos and the brief white placards, would derive a fraction of what she gives visitors for their $10. Which is good, because you can’t see it without her: admission is by appointment only.
“Welcome to Vent Haven, thanks for coming,” she said to my family and four other guests, part of the thousand or so visitors who tour each summer. “This is the world’s only museum dedicated to ventriloquism.”
Sweasy did not start out as a ventriloquism expert. She was a junior high school math teacher and one of her students was the daughter of the lawyer for the man behind the museum, William Shakespeare Berger, a Cincinnati businessman who, on his first trip to New York in 1910, bought a dummy as a souvenir, Tommy Baloney. 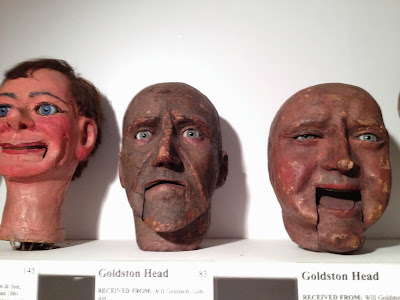 Tommy’s on display, among the legions of now-silent totems from a little-honored art form, one whose popularity waxes and wanes — mostly wanes in recent decades, though in 2008, ventriloquist Terry Fator signed a five-year, $100 million contract to perform in Las Vegas.
Sweasy gave us the history of the place, a hobby that became an obsession, standing outside three small cottages, explaining, "once we go in there, you'll stop listening."
She got that right. It is breathtaking, almost shocking, to walk in. The cognitive system that humans use to process social cues is jarred: they're not alive, of course, they're dolls, puppets, dummies, whatever, though some seem startlingly close to life.
Part of what made Sweasy so interesting is that, though she was very well-versed in the lore of ventriloquism, enthusiastic and knowledgeable, she was no shill.
Most visitors, she said, see the dummies and "personally find them the stuff nightmares are made of—four out of five visitors to the museum have that reaction."
She thinks what snags you is the stare. "Psychologically so inappropriate to stare at one another," she said. "When humans do it, they're either going to kiss or hit you."
I ran by Freud's theory of the unheimlich, or "the uncanny," that uncomfortable zone between human beings and inanimate objects. A rag doll is not scary because it doesn't look alive, but a mannequin can be close enough to creep you out.
Not that the museum itself focuses on the macabre. Rather it is a celebration, not just of the dummies, but of the craftsmen who made them and the performers who worked with them, with a large display for the most famous ventriloquist, Edgar Bergen — who got his start at a Chicago talent show in 1925 — and his Charlie McCarthy, a replica (the original is in the Smithsonian). There is a wall of mementos and photos of revered Chicago carver Frank Marshall who made dummies for Paul Winchell and others.
The museum goes up to the present day, though I admit that the neon green, furry, muppet-like puppets held little interest for me. I think the highest recommendation I can give it is that my two boys, 17 and 18, spent 90 minutes there without a murmur of complaint.
Again, credit Sweasy. She was a font of information. She put on white gloves and showed us how the dummies operate, their heads containing a watch's complexity worth of levers and rings that not only make their mouths move but, sometimes, their eyes, their ears twitch. Some could smoke; some had their hair flip up in surprise.
And for your Bright People Can be Surprisingly Thick file add this: Driving away, I wondered aloud where the "Vent Haven" name came from. It wasn't the town, or the guy who started the museum. What was it?
"Vent is short for ventriloquist," said my younger son. "A haven for ventriloquists."
Ah yes. That would make sense.