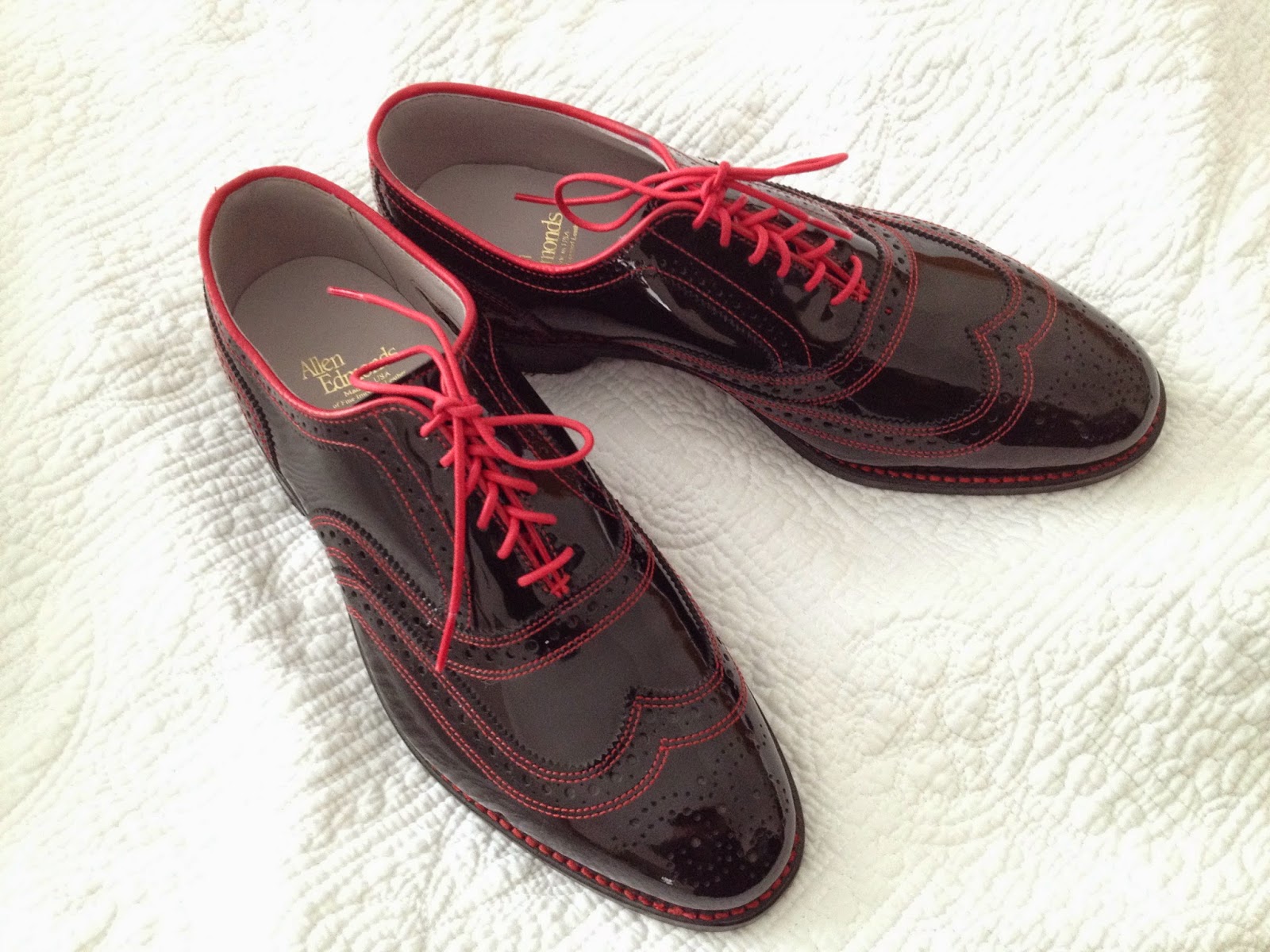 Shopping at Nordstrom's Rack on a Saturday is not my idea of fun. But it was mid-afternoon. I'd been working away since 5 a.m. My wife invited me to come along. It seemed a festive outing.
Now, it just so happened that these patent leather Oxfords with red stitching were just sitting there, in my hard-to-find size, 8 1/2EEE. Which normally I wouldn't touch, but as it is, I'm master of ceremonies again this year for the Night Ministry's fancy black tie charity ball at the Standard Club—June 4, if you're interested—and it struck me that I should get formal shoes to go along with my tux.  Street shoes made me feel, well, not quite dressed to the 9s as a master of ceremonies should be.
The red stitching threw me off. I'd have to wear them with a red bow tie and cummerbund.  Some consultation was in order.
"Honey," I asked my wife, holding up the shoes. "Do you think I can get away wearing these with my tux?"
"You don't have to be boring all the time," she replied, and I must have looked like a puppy that had been stepped on, so she elaborated: "When I met you, you would wear these bright-colored shoes."
Boring AND a shadow of my former flamboyant self. Thanks honey.
That sealed the deal. Well, that and the fact they were 2/3 off, and made by Allen Edmonds, whose Wisconsin factory I visited five years ago, and developed brand loyalty toward, if you can have brand loyalty for a product you don't actually own.  This is the report I filed:

Precisely 120 miles due north of the Wrigley Building is the largest men's shoe factory in the United States, the Allen Edmonds Shoe Corp. in Port Washington, Wis.
There—not in China, nor in India—sheets of calfskin, miles of thread and gallons of glue are turned into about 1,000 pairs of men's shoes every day. Shoes whose given names — Bradley and Kendall, Grayson and Maxfield, Ashton and Powell—evoke both boardroom elegance and, at least to me, the class roster of a North Shore preschool.
I spent hours prowling Allen Edmonds on Monday, and the good news is there's absolutely nothing moribund, doomstruck or woebegone about the place—it is perhaps the cleanest factory I've ever visited, with the possible exception of a flatbed scanner plant in Taiwan, and there we had to wear white paper suits and go through an airlock to blow the dust off our clothes, so it's an unfair comparison.
A quality shoe is constructed around a foot-shaped form called a "last." But I must pause, before getting bogged down in the 200 steps it takes to make a shoe, from the person who circles imperfections in the hides so the pieces that become a shoe can be puzzle-cut around them, to the man who grinds away a small corner of each inner heel, so it doesn't catch on the cuff of your suit (as someone who has wrecked his share of pants cuffs on the knife point heel of my Church's wing tips, I particularly admired that detail).
The true wonder of Allen Edmonds, beyond the fact that they will custom make a pair of size 21 AA brogues in purple leather for you, if you so desire, is that it's still in Wisconsin, since 1922, despite the triple whammy that gutted most of the American shoe industry.

WHAT WE DO MAKE: DEBT, FANATICS

First, cheap foreign labor. Since 1968, some 98 percent of America's shoe production has tap-danced overseas. The Brown Shoe Co.— which made St. Louis into a shoe-making center, introducing Buster Brown Shoes at the 1904 World's Fair there—closed its last American factory 25 years ago. Cole-Haan stopped making shoes in Maine in 1999. Florsheim began in Chicago in 1892 and closed its last Illinois plant 100 years later
You get the picture.
Allen Edmonds employs about 300 people at the factory—with another 300 at stores and warehouses—and was purchased in 2006 by a Minneapolis private equity firm for $123 million. Its most dramatic change since then has been to open a small hand-stitching operation in the Dominican Republic—not, spokesman Colin Hall vows, as the vanguard for any overseas move, but to boost its casual line.
American manufacturers survive by working the niches, and Allen Edmonds capitalizes on the fact that human feet range greatly in size.
"Most guys are between an 8? and 11, most are D widths, which is the medium width in America," said Hall. "So people manufacture in that core size, and if you're a brand, and don't do your own manufacturing, you're basically buying from a company in China or India. You're going to buy heavy on the center of that bell curve, because you know you'll sell the most there. We'll have the bell curve, but we'll also have the extremes, we have 6AA, we can make you a size 23 EEE."

BUT THESE KLEENEX BOXES WORK FINE!

The second blow has been style -- a young man who a decade ago went to work in khakis, a dress shirt and penny-loafers is now showing up in cargo shorts, a T-shirt and flip-flops that cost a penny to be shot-injected into a mold in Szechwan.
Allen Edmonds has been trying to surf this trend by creating a range of casual shoes, such as white slip-ons stitched in red, meant to resemble baseballs.
The third factor scuffing the shoe industry, whether domestic or foreign, is the recession, which hit quality men's shoes especially hard, since one of the attractions of a well-made shoe is that it lasts, and when times are tight you can give yours a quick buff and get by for another few months. Allen Edmonds shoes are not cheap—they start at $125 a pair and sail off to $500 and beyond.
How tough has the recession been on the shoe business? In 2008, 2,300 shoe factories closed . . . in a single province in China.
Allen Edmonds fights to stay alive through an intriguing blend of high and low tech. It might be applying the name of each shoe in gold letters, one sole at a time, by a worker at a machine, or burnish the finish of each toe over an open flame, but a running tally of the current daily production quality is displayed on a big electronic board on the factory floor.
Who'd have thought that a shoe factory would exceed my one topic/one column policy? But I haven't even told you about the guy who requested that his father's ashes be molded into the soles of his shoes. Nor about Barack Obama's regrettable bow to Chinese totalitarianism at his inauguration, and how Allen Edmonds struggled to stop him—a true treat for all those readers who spend their days searching for things to blame on Obama, with the added bonus of actually being true.

This, obviously was the first of two parts. Since I don't want to overwhelm you with any given topic—I learned my lesson with the puppets—I'll leave it up to you whether we go with the second half of my Allen Edmonds visit tomorrow or feature whatever I write for the newspaper instead. Thoughts?
Posted by Neil Steinberg at 12:00 AM