Fear is easy; action is difficult 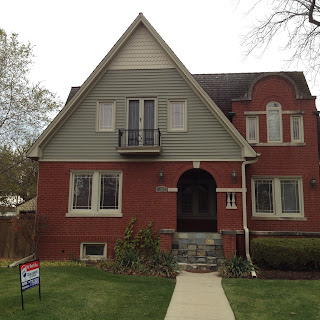 Man, finding a place for Syrian immigrants to live is hard.
A lot of readers challenged me last week with versions of Ken Racine's, "Too bad the 'refugees' won't be put in Northbrook," or sneeringly asking how I would feel if they were, to which I replied with some version of, "Great, I would feel great, a whole lot better than if I found myself living next to you."
Looking up from these conversations, I  would gaze through the window of my home office. At the lovely, vaguely Dutch brick house kitty corner across First Street. Which is for rent.

Yes, it backs up against the train tracks. And yes, the basement floods with sewage —I've seen various residents drying their belongings. But it's got to be better than a tent city in Croatia. And Gov. Rauner's wishes to the contrary, this is still the United States of America, right? Once somebody gets into the country, they can live wherever they please.
Why not, I thought, smiling, invite some refugees to live here?  Why not put them up in the big honking house across the street?
First I had to get through to the realtor and find out the particulars, the rent and such. The cheery red, white and blue RE/MAX sign had a name and two phone numbers.
I phone the top number. "Hold please," says a women. After a few minutes, I figure, "Try the cell.'" That immediately dumps to a message: the mailbox is full.
It'll take persistence to solve the refugee crisis. A third call to RE/MAX. "Hold please." A few more minutes. I ask for the realtor on the sign. And get transferred to the cell phone number that isn't taking messages.

I take a break from phoning and entertain myself by reading more emails.
"Do you understand how horrific these people are ??" writes Paul Vitaioli , a retired cop, referring, I think, not to real estate professionals, but to refugees. "You feel safe where you live? Do you have a family and young children? Or grandchildren?"
He guesses my beliefs that America is a bastion of freedom which has always attracted the downtrodden of the world will crumble at a touch, like his.

"Sit behind your comfortable desk and write about it," he scoffs. "When terror strikes the Midwest, then tell me your thoughts.... "
"When terror strikes..."? I'd say terror is already here, inspiring a big old American panic. Odd; usually our panics are sexual. At least we're shaking it up, with good old fashioned fear for our safety. I've never heard from so many terrified Americans as I have in the past week. Begging the feds to tap our phones, read our emails, toss any freedom out the window if it dials back their fear.  And for God's sake, close the borders, keep the menace out, at least until some imaginary vetting process where the soul of each would-be immigrant is x-rayed by the FBI and certified 100 percent pure, like beef. A version of the first-we-secure-the-border gambit already so popular when discussing immigration, the Republican half clever strategy of demanding something impossible as a precondition for doing what is absolutely necessary.
Okay, enough of that. Back into the fray. Fourth time, I think, is the charm. I phone RE/MAX, don't ask for the realtor, Instead say I'm interested in renting the property on First Street. The whiff of business will snap them to action. I'll mention the Syrian refugees later. She puts me on hold, tries the number, confirms it isn't working.
"His phone is shut off," she says. "He doesn't have a voice mail."
And I bet this guy wonders why business is slow.
Eventually, I convince the receptionist at RE/MAX to take my name and number — she's obviously reluctant, as if she knows nothing will come of it, which, indeed, nothing does.
Okay, there are other rental properties in Northbrook. Now what? The next step — probably what I should have started with all along — would be to contact whatever placement agency handles these refugee placements and see what their needs are. I can't be the only person who wants to help desperate refugees instead of throwing stumbling blocks in front of them. Then I'll be closer to finding out whether I was right guessing that any random refugee family would make a better neighbor than someone culled from the terrified herd of false Americans who have been bleating with self-concern all week.
I plug "Agency dealing with Syrian refugees Chicago" into Google and up pops something called RefugeeOne. So I phone them. And email. On Thursday. And again on Friday.
Nothing. Hmmm. They're probably very busy ... ah ... helping people. I'll return to the battle on Monday, and keep you posted as to what, if anything, results. Fear is too easy, and doing anything constructive is hard. Maybe too hard.