It won't make you fat if you can't eat it 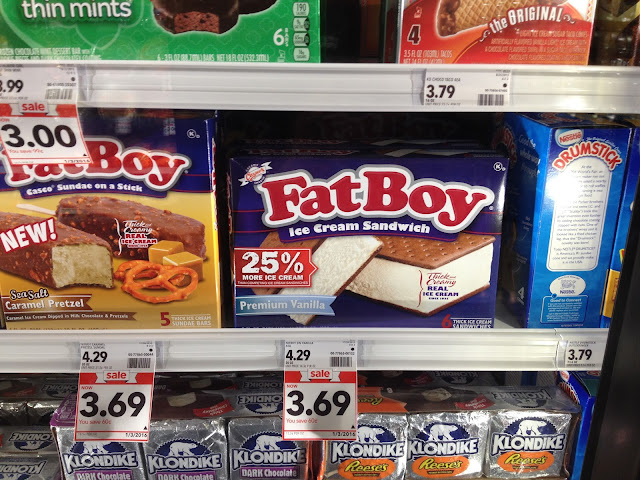 You just don't see products with "Fat" in their brand names. Everything is "Lean" or "Diet" or "Organic" or "Healthy." I suppose there are lots of products, if you include "Non-Fat," but that seems cheating. So I was intrigued by this line of FatBoy ice cream novelties, on sale at the new Mariano's at Dundee and Skokie. 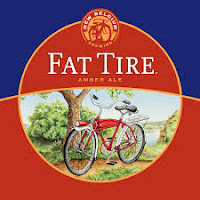 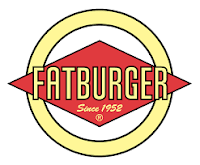 Can you think of another example? I tried. There's Fatburger, in Los Angeles, but that's a restaurant chain. Chicago has a Fat Rice on Diversey—Chinese culture seems to still get away more with glorifying fatness; maybe it's all those buddhas or, more likely, a symptom of rampant hunger.  Given the profusion of wacky beer names, it shouldn't surprise there is a Fat Tire Amber Ale, though with its retro bicycle on the bottle.
Even products with chubby mascots put them on a diet—the Campbell's kids come to mind.  And with good reason: a study published by the Journal of Consumer Psychology last summer suggested that children eat twice as much cookies and candy at a sitting after viewing lumpy characters than children who are shown thin characters.
You know where the affection for fat children comes from? Back in days when people struggled to get enough to eat, and unchecked infectious diseases scythed children down, you wanted those apple dumpling cheeks as further evidence your child didn't have cholera. Everyone was going to die at 45 anyway, so the raft of chronic illnesses brought on by obesity, cardiac disease and such, were rarely a concern.
Childhood obesity had been growing for years, but now it has leveled off, according to the Centers for Disease Control, at about 17 percent, with a direct corollary to parental education. Among parents with a college education, the prevalence of obese children is half that of children of parents who didn't go to college.
When I first snapped the above picture, I didn't actually buy the FatBoy ice cream sandwiches. I don't eat that kind of thing. In fact, I go to Mariano's for their low-prices on Yasso bars—frozen yogurt on a stick and only 80 or 100 calories, depending on whether they are pure flavors, like chocolate and vanilla, or have 20 calories worth of chocolate chips and cookie dough pebbles tossed in. I go through one or two a day.
But that seemed a failure of imagination and, with this post in mind, I picked up a box of FatBoy bars when I was there loading up on Yasso.
FatBoy is made by Caspers Ice Cream of Richmond, Utah. The company began in 1925 when Casper Merrill started selling ice cream nut sundaes on a stick made from milk from the family's cows. The FatBoy came soon after, so named because of its square shape and unusual thickness.  The company is run by Merrill's grandson, and the two original products seem to be the only items Caspers sells, though the FatBoy sandwiches come in 11 varieties and flavors, including key lime. For a 90 year old product, it doesn't seem to have had much impact on American cultural life, but that might be a factor of it being slow to get out of Utah.
I headed into the basement Wednesday after dinner, thinking to grab a Yasso bar, and noticed the FatBoy box, sighed, and brought one upstairs: 210 calories, which I cut by 50 calories by enticing Edie into eating a quarter. We both took a tentative taste.
"Buttery," I said.
"The wafer part doesn't taste chocolatey," she said. "It doesn't taste like anything."
She tossed the quarter she had nibbled into the trash. I finished my FatBoy, hoping that my own boys, neither of whom is anywhere near fat, would handle the other five FatBoy sandwiches when they come home from college this spring. You want local foodstuff with unusual names to taste splendid, and I guess buttery ice cream might be splendid to some folks. But not to me. Neat retro name, though.