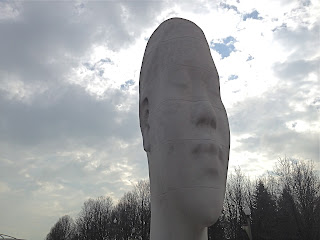 February is a Leap Year this year, which means there are 29 days for the dual-edged sword of Black History Month instead of 28.  Valuable focus on a neglected and vital part of American life or another forgotten ghetto? I've tried to sort it out over the years and come up short.

February is upon us, and with it Black History Month. Which revives the perennial question: If blacks are a vital part of American history -- which of course they are — then why put them in a separate month? Is this not segregation? What's wrong with their history being neglected . . . whoops, I mean, being taught year-round, with the rest of American history?
It's an irreverent question, of course, but one I suspect lurks at the back of many white minds. Where's our month? If February is Black History Month, why not make March White History Month, and the papers could run thumbnail sketches of, oh, say Richard Petty, Saul Bellow and the polka.
Well, the answer is rather like the response parents give smartmouth kids who ask why there's a Mother's Day and a Father's Day but no Children's Day: "Every day is children's day." Every month is white history month, and while the legacy of neglect has been addressed in recent years, its effects are still there.
When I learned my American history, back in the 1970s, blacks showed up suddenly in 1770 in the form of Crispus Attucks, who is promptly killed in the Boston Massacre. ("Isn't that like the white man," I imagine some readers thinking, "he brings a black man into the history books just to kill him.")
A couple more flashes -- the Civil War, Selma -- and that was it.
So perhaps a little catch-up is in order. Besides, the problem isn't teaching black history in February -- it's not teaching history the other 11 months. If you want to make March into Memorize the Presidents Month, I'll stand with you.

My beef with Black History Month is it implies that somehow black history is outside and separate from American history. It isn't. Black history is American history, and vice versa. That said, people of all races are so generally ignorant of everything that has gone before them, any artifice that helps fill the gaping void is to be welcomed.
The problem is that most Black History Month efforts are directed at children — as if they're the only ones who require a vague idea of the past — and thus we get the same tales every year: George Washington Carver and the peanut; Martin Luther King and his dream.
What about something for those who've mastered the basics? There is, for instance, the question of how outsiders viewed our system of slavery. Charles Dickens, at 30 the most famous author in Britain, came to America in 1842 to tour the new republic, visiting prisons and insane asylums and textile mills. He never made it to nine-year-old Chicago, settling for St. Louis instead. Dickens was a keen observer, repulsed by the ubiquitous American habit of chewing tobacco and experiencing a wave of guilt when, on his way to Washington to meet President Tyler, he found himself in a slave state. Dickens writes:


We stopped to dine at Baltimore, and being now in Maryland, were waited on, for the first time, by slaves. The sensation of exacting any service from human creatures who are bought and sold, and being, for at the time, a party as it were to their condition, is not an enviable one. The institution exists, perhaps, in its least repulsive and most mitigated form in such a town as this; but it is slavery; and though I was, with respect to it, an innocent man, its presence filled me with a sense of shame and self-reproach.