The pavement in hell. 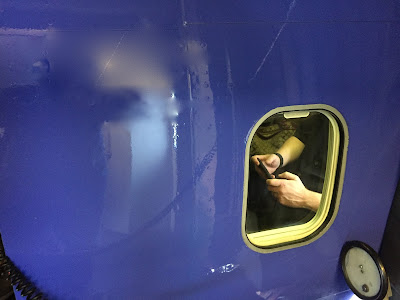 Email hasn't quite fallen into the realm of nostalgia along with semaphore flags, smoke signals and handwritten notes sealed with red wax.
But the truth is, with text messages and tweets and Facebook posts and comments, you just don't see a lot of emails anymore. They're not yet down there with telephone calls. But let's put it this way. I had a column Friday in the Sun-Times on a timely topic—the FBI demanding that Apple create a "back door" to hack its own iPhones so that they can peer into the locked phone belonging to the couple who murdered 14 people in San Bernardino, California Dec. 2. The column ran on page seven, took 2/3 of a page, with photograph, and was promoted on the front page, with a picture of me and everything.
Four emails.
But that wasn't the sad part. The Internet has created a typhoon of communication and any given peep is apt to be lost in the general howl. I get that. The sad part was what the four emails said. They ... well, no need to summarize.
The first one read:


You disappoint me. I thought you were better than this. You actually think that your life is so interesting that the feds would bother to take notice of what's in your precious little I phone? I actually think they (the feds) have a lot more to do trying to identify terrorist cells within our country than concern themselves with your playlist. If opening that iPhone means acquiring credible information to protect us with, what do I care about Apples proprietary software. If they are that concerned, just have their techs do it in the Apple lab and hand it back to the feds open. What's the big deal?

The second one read:


During its existence, every civilization, or every nation, is forced by circumstances to make choices--how to manage their land, which alliances to make and what form of government to embrace. I would seem that in order to protect its citizens from external (or for that matter, internal) danger, the government is most efficient when it has the most information regarding those who would do its citizens harm. Further, turning over the I-phone in question to Apple for the express and not repeatable purpose of unlocking its contents is certainly reasonable given that the phone's user (and not its owner) gunned down 14 innocent people. It would be good not to have a repeat of that episode; remember that privacy is a privilege; freedom from harm is a right.

The third one read:


Neil I read as much of ur article as I cld until I had to run outside and hug a tree and look for a whale. Why did Apple open up 7 other phones when requested by the FBI previously? Did they do it because their stock price was on all time highs but now because it's about to make a new 52 week low, it provides a hypocritical opportunity to pander to the uninformed in an attempt to polish up their reputation? Haha! U really believe there is privacy? That is 7 separate back doors developed. Ur co just sold my email address for 7 cents. If u had my home phone it's a quarter. That's what Apple considers ur privacy worth

And the fourth one... oh heck, you get the idea.
A uniform chorus, saying, in essence, let's swoon in the arms of the government, let them paw through our sock drawer, and maybe no one will hurt us.
"Government is most efficient when it has the most information regarding those who would do its citizens harm." And that is...everybody and anybody? And notice the second writer, who conjures up "not repeatable purpose" when the whole issue as laid out by Apple is once they create this way into their phones, it will exist and get out and anyone can use it, not only the government, but criminals and terrorists themselves. He missed the entire point, the nut of the issue, blinded by...
Fear. The Republican Party is the Fear Party. They're afraid of immigrants. They're afraid of minorities.
And they're afraid of terror. They're terrified, literally. Which is both natural and exactly what the terrorists intend. They lunge at anything they think will take the edge off their fear, no matter how counter-productive. They stock up on guns, ignoring that each gun endangers the owner far, far more than it provides any kind of guarantee against all that they're afraid of. They'd bar the immigrants who make our country strong, whose arrival is what stands between the United States and the demographic death spiral ruining places like Italy and Japan. They hate every embodiment of the government and then turn to it with a cry to run their lives and protect them from shadows.

"Freedom is not free." That's the buzz line false patriots use when paying lip service to the military. But what does it mean? It means that there is a cost to freedom, a risk. Part of that risk is not letting the FBI rip open our lives and root around whenever they please, all in the name of security. "Hell is paved with good intentions," the great Samuel Johnson once said. How can they not see it?
Four emails. I don't want to leave you with the impression that's an average day. Usually it's more like 40. Maybe everybody was outside, enjoy the warm, windy weather. Maybe their courage was blown away in the breeze. I hope they find it again when the winds stop, maybe flapping in the tree like an errant plastic bag.
Posted by Neil Steinberg at 12:00 AM