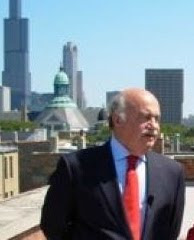 Oscar D'Angelo, the "Mayor of Little Italy" has died, the Sun-Times reported. Back in the day, I had a few tussles, and a few lunches, with D'Angelo, one of those shifty characters who gave the city its murky charm. The incident I remember most regarded planters in West Fulton Market, put in for the 1996 Democratic Convention, but a danger to traffic. They stayed in, even after a police officer was paralyzed crashing into them. Eventually, they came out, and I helped. This ran under the headline,  "City inaction on planters sure to end up deadly."

Nobody has been killed yet.
No car filled with children, nudging its way north onto Randolph, its driver trying to peer around the plants and planters -- a combined 6 feet tall -- erected by the city four years ago to decorate the Democratic National Convention, has been broadsided by one of the semis thundering west on Randolph.
Yet.
But that day is coming, despite the efforts of local business leaders, a dozen of whom gathered this week to publicly appeal to the mayor to redo the planters, a pet project of his.
"This is a very, very dangerous situation," said Larry Pienta, a co-owner of J.P. Graziano Importers. "We told the planning department and the engineers when they first started it that it wasn't going to work, and it hasn't. Somebody is going to get killed here."
Someone getting killed would make the job of lowering the planters a little easier. Though public complaints about accidents have been pouring out for years, nothing has been done or is close to being done to fix the situation. The suspicion is that mayoral pal Oscar D'Angelo is somehow blocking action.
"It's true," said Chris Aralis, owner of La Quinta Food Importers.
When confronted with the issue at a meeting at the offices of the West Loop Gate Community Organization, where he is a board member, D'Angelo reportedly said: "We spent $5 million to put those things in. I don't care if three or four people have an accident." This stunned those present.
"We have a good relationship with West Loop Gate, and I was really shocked that one of their board members would say that," said Roger Romanelli, executive director of the Randolph/Fulton Market Association.
Even fellow West Loop Gate officials were disturbed by the comment.
"I'm not going to lay down for Oscar," said Tom Kapsalis, West Loop Gate president. "If he said that, he said it. He gets emotional. He gets angry, and many times he says things he really doesn't mean."
"Those planters are always brought up," said Gail Filkowski, executive director of West Loop Gate. "The planters are the mayor's baby, not really Oscar's, not really Tom's. The two of them are involved, of course. I know they love the planters. The planters are beautiful and add a lot of green."
Finally, after I spoke with his minions, D'Angelo consented to speak with me. He did not deny his statement, but rather tried to put it into the larger context of his life -- the millions of dollars given to charity, the decades of selfless public service, the general malice of the media.
He was very smooth: a pleasing velvet fog.
Fine, fine, I said. Are you against altering the planters?
"Absolutely not," he said. "If that's what the experts say. If (the Chicago Department of Transportation) or any responsible agency said it was a safety issue, I would not be opposed. But I haven't seen a single word."
The business leaders have been appealing to CDOT to release those figures, I said. Perhaps somebody -- an Oscar D'Angelo, perhaps -- is quashing them?
D'Angelo said, a smile in his voice, that he "hadn't written a letter" telling anybody to withhold data, and I countered that even in my limited knowledge of politics, not many people write letters like that.
And on and on. The need for study seems to be the party line. Kapsalis said the same thing, despite believing the planters are dangerous.
Yet, he concluded that "I'd hate to see them changed," and suggested, rather than an immediate fix, "a little investigation" is in order.
Meanwhile, accidents happen every day — sometimes four times a day — on Randolph from Halsted to Ogden. It is merely a matter of time.
I am not a lawyer, but I know that part of liability can increase with advance knowledge that a situation is dangerous.
The planters were installed four years ago; for the past three years the warnings have been sounded, unheeded.
Nothing happened. Nobody paid attention. But they will. Just as nobody cared about selling truck licenses in the secretary of state's office until six children were incinerated in an accident with a truck whose driver apparently bribed his way onto the road, so they will also care about the planters.
Maybe not this year. Maybe not the next. But someday a driver trying to see around those planters will be hit by a truck. The heirs will sue the city, claiming that it was warned again and again about the peril and did nothing. It hasn't happened. Yet.
But it will.

—Originally published in the Chicago Sun-Times, August 23, 2000
Posted by Neil Steinberg at 12:12 PM