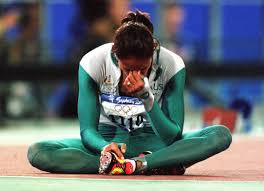 I missed the Opening Ceremonies of the Rio Olympics last night --a long family dinner in Evanston at the excellent Tapas Barcelona, then a stroll on the lakefront. I'm not sure what I'll be doing today, but tuning in to the Olympics is not the the dance card.

Then again, I've made scorning the Olympics a tradition, and tend to put it in the paper, not to antagonize fans—hey, do whatever floats your boat—but as a comfort to those of us who don't share in the excitement. This is from 16 years ago, but I like to think still has bite, and I'm sharing it, even though my optimism that the Olympics were fading was obviously misplaced, as was my hope that we were learning not to be sucked into the media maelstrom swirling around us. Shows that even I was a dewy optimist, at one point long ago.

The Olympics are a very strange cultural oddity that should have died out years ago. I'm speaking generally. I can't refer to the current Olympics unfolding in Sydney because I haven't watched, not a minute, and I was just beginning to feel guilty about that when my colleagues in sports came to the rescue with the news that nobody else is watching much, either.
El floppo. A big ratings disaster.
The sportswriters, true to their trade, find this worrisome and have offered up all sorts of reasons for the collective public shrug of indifference: end of the Cold War, rise of the Internet, lack of any huge Tonya Harding-esque drama to drive people to their televisions.
My reaction is different, and can be summed up as follows:
Hooray!
Our long nightmare is over. The Olympics, though not without moments of interest, are a tedious, mystifying ritual waste of time.
Think of the opening and closing ceremonies: these gigantic displays, part May Day in Beijing, part Disney World parade grown huge on steroids, and part Mardi Gras on Jupiter, with some ridiculously bland pop entertainer thrown in for good measure.
Think of gymnastics. How frightening are they? These poor little girls, duped into wasting their lives bouncing around floor mats and pommel horses. Their parents should be in jail. I'd rather have my boys become juvenile delinquents, making zip guns in shop class, reading hot rod magazines and sneaking smokes behind the garage, than have them spend six hours a day for a decade of their irretrievable youth trying to leap off the uneven bars and land squarely. How tragic.
Remember Mary Lou Retton? She was like something out of a horror film. The bulked-up body of a monster somehow hideously compressed to tiny size, perhaps through radiation. And that fixed smile—just the right touch of Stephen King normalcy-gone-haywire. They put her on the Wheaties box, but she would have been more at home in a Wes Craven movie, still in that red, white and blue leotard, that smile still plastered on her face, but twirling and somersaulting toward her victims with an ice pick in each hand.
Of course we would turn away, eventually, once the culture had stopped shaming us into watching, once it stopped being a patriotic duty to show up and boo the Ruskies, once the quaint allure of amateurism had been overwhelmed by the pervasive stink of commerce, once the entire thing turned into less sport and more a cattle casting call for the next two years of Nike commercials.
Good that we are retreating, averting our faces. Maybe people are finally wising up that they don't have to sit up and beg, transfixed, every time the bell is rung and the next Huge Honking Deal announced.
If access to information can be plotted on a curve, from the days when farmers left their plows and hurried into town when the mail packet arrived, bringing with it a 2-month-old newspaper with tales of the Treaty of Ghent, to today, when you can keep your cell phone and your Palm Pilot jiggling on your belt and be plugged into everything all the time, maybe now we are reaching some kind of limit, some zenith of access, the moment when we realize that the next challenge for humanity is no longer faster, greater access, but to think about delegating, about culling, about triaging, about learning to ignore stuff.
Like the Olympics.
Think about it. Even if you expected the most incredible thing in the world to happen. Even if you were certain—if you knew—that a wonder would occur, that a gymnast would throw herself into the air, and remain there, spinning, a foot above the ground, for half a minute. Would you then watch the darn thing every night?
No. You would wait until it happened, until news broke, then catch one of the endless replays of the miracle, on the news, on cable. You'd log on somewhere, to the site where they show the clip upon demand. That would do.
Time does not expand, no matter the technology. And while I would hate to argue that we have reached an apex of sophistication—the Babylonians felt that they had scaled the summit because they had bronze and perfume—I will argue that it is dawning on people, slowly, that they need to be selective, to master their own destinies.
Maybe nobody is watching the Olympics because we remember how transfixed we were by the O.J. trial. All that time wasted soaking up the endless parsings and analysis. Maybe we learned something. That we can opt out, we can ignore. I didn't watch a minute of "Survivor," either, despite the hoopla, despite readers sending in videotapes, despite colleagues challenging me, testily, saying that I was betraying the duty of a columnist to keep a finger on the pulse of the world.
Duty shmooty. Nothing is going on in Sydney of any importance whatsoever. Feel free to ignore it and do something else: Make taffy with your kids, go for a walk, learn to knit. You'll be glad that you did, and proud, too. I am.