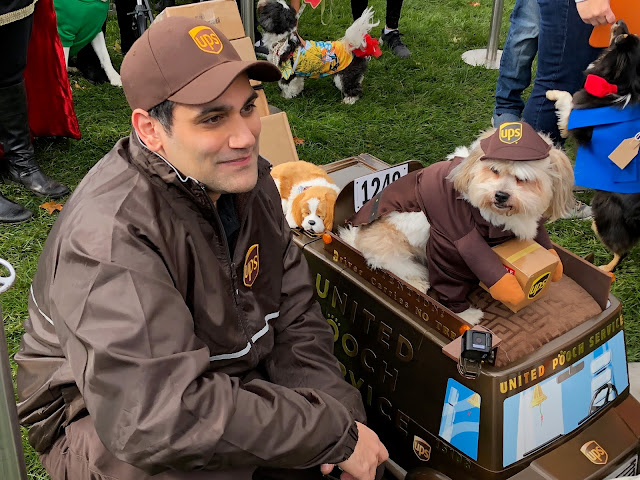 Halloween used to be a kid thing. Children wore costumes, ran around the neighborhood, collected candy. Their parents didn't even hover in the distance, monitoring, the way they do now. Unless their kids were toddlers. At least mine didn't. They assumed their youngsters could navigate their own neighborhoods and find their way home, sometimes lending them flashlights for that purpose.
By the time you were a teen, the party was over. You were too old for Halloween, though you tried to get one last candy sweep of the neighborhood in before exiled to the responsibilities of semi-adulthood.
Now that's changed. Halloween has also become a grown-up thing, spurred by big beer companies. The adults don't go door-to-door demanding candy. Not yet anyway. But otherwise, it's official party time, like New Year's Eve or the Super Bowl or the Fourth of July.
Pets are included in on the fun too, as we celebrate ... what is it exactly? Our temporary reprieve from the universality of death, I suppose. The flavor "Pumpkin spice." Something like that.
I'm game for a little Halloween fun. On Saturday, I went to help judge the Spooky Pooch contest at the Chicago Botanic Garden, as I did last year. There were three other judges, and each of us got a different category: one judged dogs who looked like their owners, another judged puppies. My area was "Botanical Bowsers"—dog costumes on themes related to gardens.
Not a popular category. Most dogs were dressed up as sharks or spiders, pirates or, as in above, a UPS driver. Of the 325 or so entries, 11 entered the aspect I was judging. Not many. The space in front of me where eager contestants were supposed to be was usually empty, while the lines grew in front of the other judges. I felt shunned by fate and costumed dogs.
"Avoid altruism," I muttered to myself, slumping on my folding chair, looking around, feeling mooted, ignored. What our weatherman MC kept calling a "wintry mix" started pelting down, the grey skies raced by, wet, cold, windy and foreboding. That didn't help. The guy from WBEZ next to me smiled widely at his crowd of contestants, busily judging entry after entry. In front of me, nothing, nobody. Typical.
Okay Neil, I told myself, suck it up. Can the self-pity. So you get to spend a couple hours at the Botanic Garden, looking at excited people—families often—and their cute pets wearing creative costumes. Two dogs came before me dressed as autumn leaves: not quite the theme, but pretty enough. A French bulldog named Uncle Bill was dressed as a bird of paradise, which is definitely botanical. He could have won. But for the trio of very enthusiastic folks, their costumed called "In a garden." Two were dressed as gardeners, one as a bee and their two dogs were dressed as a flower and a bee—essential for pollination. I have a lot of sympathy for bees; they're embattled. "Life brings our misfortunes to the bees," as Virgil wrote. And these people were really, really excited just to be there. Of course I picked them—as opposed to, say, the contestant who confessed she decided to enter into the garden category because she figured few would and thus had the best chance at winning.
Picking worthy winners helped. They seemed surprised, overjoyed. So not such a bad idea to do this after all. Certainly meant something to them. And maybe to me too.  Being a writer often is incredibly humbling, and while it can sting while fate is administering her lashes, the lesson is a valuable one, and keeps hubris tamped down.  If you're self-important, you shouldn't be—the significance is passing at best—and if you forget that, reminders will be administered. 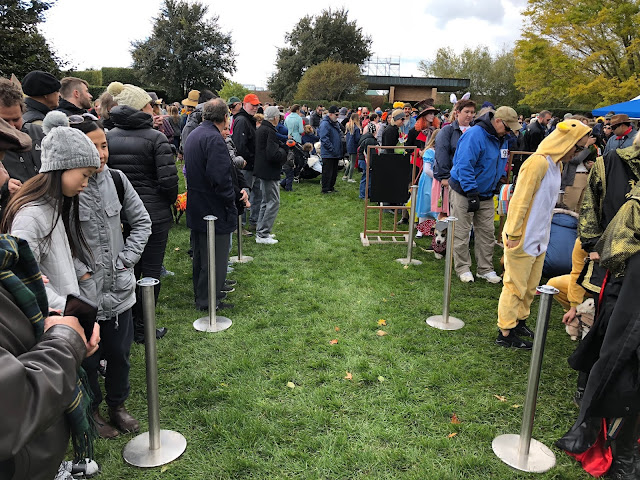