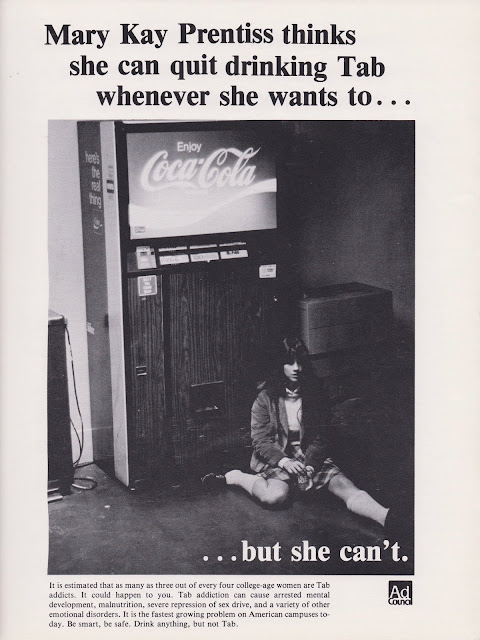 Tab, the diet soft drink made by Coca Cola, is having a cultural moment. Another cultural moment, rising like a carbonated bubble to the foaming surface of American life. According to the New York Times, its die-hard fans are in a "panic" over the prospect of shortages, whether real or imagined. I was alerted to this crisis thanks to that carnival of the trivial, Facebook, by an NU classmate who sent me a link to the story, and reminded me of a parody ad I had wrote for our college humor magazine, "Rubber Teeth."
It's flattering to have something you did remembered after ... gee ... 38 years, and I promised I would dig it up. Though now, I can't imagine what prompted me to write it; living in a co-ed dorm, the Northwestern Apartments on Orrington Avenue, I suppose. The beautiful, good-humored model, Laurel Campbell, was my next door neighbor on the second floor, and I vaguely recall posing her in some remote dorm basement. I remember being inordinately proud that we found a machine whose little light is on for the Tab button, showing they are out. I also seem to remember concerns being raised by my colleagues at the magazine—Rubber Teeth, for "biting satire that doesn't hurt," the brainchild of my pal, Robert Leighton—about lawsuits from an offended Coca Cola, the kind of grandiosity that launches magazines in the first place. "Let 'em sue us," I said, reflecting complete ignorance both of the agonies of litigation and the protection offered by parody.
The ad's rudimentary production values I'll generously hope can be ascribed to trying to imitate those grim fear-inducing Ad Council warnings about drunk driving and child abuse and such, popular at the time. Though they more likely were mere amateurism. I was 20, which I hope excuses me from any stench of sexism that lingers around the copy. The year was 1980.
None of which would be worth sharing, if reading the Times piece didn't raise a question that it didn't bother to answer: Tab and Diet Coke: what's the difference, if any? "The Straight Dope" addressed the question in 1983, concluding that "For practical purposes the difference between Tab and Diet Coke is that they come in different-colored cans." The Tab can being pink, speaking of sexism, the idea being, I guess, to make the product a siren call to dieting girls, who love pink. Even more noteworthy, the Coca Cola company seems to think that it should be spelled "TaB," as evidenced by this bit of corporate puffery celebrating the beverage's 50th anniversary in 2013. Not happening.