It was raining, lightly, on Friday afternoon when I finished lunch. Leaving Petterino's, I meant to head south, to grab the Madison Street bus back to the newspaper. But I was slightly awhirl from my conversation, to be honest, and found myself quite turned around, walking west down Lake Street when I finally got my bearings.
I decided to keep going. Atlas Stationers was only a few blocks away, and I braved the sprinkles to pick up my new 2019 Brownline datebook before they ran out, as they sometimes do if I wait until too close to New Year's. I could have easily bought it online, of course. But I hadn't been to Atlas in months, and stopping by was like visiting old friends, literally, from walking past the timeworn iron columns, to catching owner Terese Schmidt between deliveries, and being introduced to her younger son, fresh from college and now working at the store.
She expressed relief that I had come for my Brownline—they had worried—and proudly showed off Atlas' new pen section, explaining how young professional types are hot for fancy pens, for Waterman fountain pens and high tech Lamy pens from Germany, displayed in a case that the company custom made for the store. I observed that with the Gilbertson pen store finally closing on Chicago Avenue must have left those desirous of high end pens underserved, and she was wise to stop into the void. She said that guidebooks are now lauding Atlas for its pen selection, and that the splendid office supply shop had now become a "destination" sought out by pen-savvy tourists. 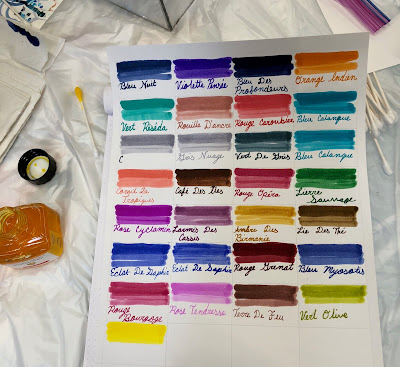 Owners of fancy pens, Terese explained,  like to use colorful inks, not just in the traditional blue or black or red, but an entire rainbow of possibilities with names like Rose Tendresse and Violet Pensie. As it happened, an Atlas employee, Khermariah McClinton, was penning a colorful card, to let customers know their ink options. When I asked her to write her name in my Moleskine notebook, she did so in a bright Hunter Green hue.
I explained, rather sheepishly, that I write too much to be able to indulge a fancy pen, certainly not a fountain pen, and that I was sure to lose any pricy pen I was so bold as to buy, and keeping track of the treasure until that inevitability would be a continual burden and source of strain, its certain disappearance a source of grief. I thought of suggesting a compromise—a trainer fancy pen, once only mildly pricey whose disappearance would be a manageable woe. Instead I showed off the cheap yellow Sun-Times promotional give-away pen I glommed from the newspaper, as proof that what I said was true. Still, that attitude, once articulated, seemed a species of cowardice, and I promised that I would keep track of the pen trend, and perhaps reconsider my refusal to acquire a fancy pen of my own at some point in the indeterminate future.