Outside the box: A visit to Chicago Mailing Tube Co. 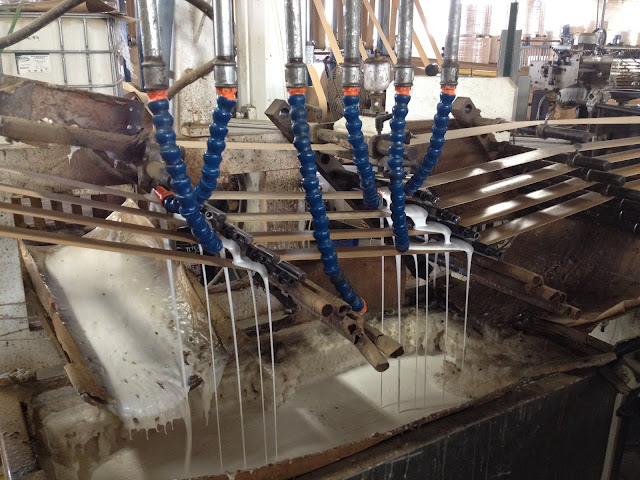 I had to call Chicago Mailing Tube Monday, related to a project I'm writing for the paper. To my amazement, I realized that I never posted the column I wrote about my visit there, 11 year ago. That seems a tremendous oversight, considering how much affection I have for their product—sturdy, sharply-made cardboard mailing tubes.
Perhaps the visit is a worthwhile distraction, too. I don't know about you, but there is only so much time I can fret about our country declining into a feral state, and there is a comfort in the poetry of tangible objects. Back then the column covered a full page, and ended with a joke, so I've left it in, though I seem to think my audience consisted for politically-savvy 6-year-olds.
Ken Barmore, by the way, passed away early in 2015, just shy of his 98th birthday.

If you glance north out of the window of a commuter train shortly after it leaves Union Station, you might notice a sign with sleek stainless steel letters spelling out "CHICAGO MAILING TUBE CO."
And if you are of a certain frame of mind, after seeing that sign for a sufficient number of years, you might begin to idly wonder about the cardboard tube industry, in general, and about this low brick factory in particular. 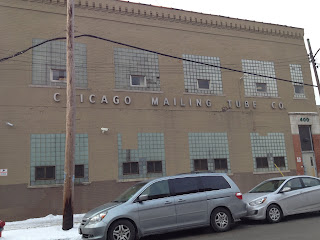 After a few years of speculation, you might find yourself climbing the stairs to the spartan second-floor offices of Chicago Mailing Tube, where you will meet Ken Barmore, 90, who bought the company in 1949.
"There wasn't much to buy," he recalls, "one machine and six or seven people—nobody knew anything about the company."
Chicago Mailing Tube was founded by three partners in 1902. Back then it sold a lot of snuff boxes—squat cylindrical containers similar to what holds chewing tobacco today. The containers were delivered by horse and wagon, and the company still proudly holds several city licenses for delivery horses.
No horses anymore, but it does have 40 or so human employees, and a number of spectacularly complex machines, producing cardboard tubes in near-Dr. Seussian splendor: ribbons of paper flying off enormous spinning spools, puffs of steam, rivers of glue pumped from 3,000-gallon vats, pneumatic hisses and roaring spindles.
The process is called "spiral winding"—3-inch strips of brown paper are coated with glue and then wrapped tightly around a metal core, or "mandrel," then squeezed by thick rubber belts.
"The pressure is terrific," says Barmore, pointing to belts compressing the tubes. "You get a finger under there, it's going to be flat."
Cutting tubes precisely is one challenge of their manufacture—lengths sometimes need to be within a tiny fraction of an inch if they are to be used in manufacturing, say to hold industrial wire.
"This is a competitor's tube," Barmore says, standing among a forest of tubes in the "sample room," appraising a cylinder as tall as himself. He eyes the end carefully. "It's got a bad cut on it. It isn't square. A lot of companies, they couldn't use that."
We think of tubes holding paper towels and toilet tissue, but they also hide in plain sight -- as Parmesan cheese containers, charity cans, crescent dough packages and masking tape roll cores. Tiny tubes hold bundles of wires in cars, and huge tubes form concrete pillars in construction. 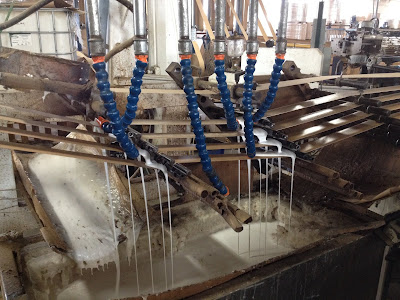 "We used to make cores for machine-gun bullets for the Joliet arsenal," Barmore said.
The brown paper in the tubes is 100 percent recycled and always has been -- Chicago Mailing Tube was green before green was cool.
"We've always used recycled paper," Barmore says. "Fifty-seven years. It's a lot cheaper." How much cheaper? Between half and a quarter the cost of new paper.
All the rejects, the poorly cut tubes, pieces of scrap, are fed up a conveyer into a grinder— it sounds like frozen turkeys raining down on a tin roof—then baled into enormous six-foot cubes to be returned to the mill to be pulped.
How does a man get into the cardboard tube trade?
"I wanted to get into the farm machinery business, but I couldn't make any kind of a deal," Barmore remembers. "I'm a farm boy, from Monroe, Wis. A dairy farm. I know cows."
Why not stay down on the farm?
"I hated it," he says. "I hated milking cows."
This was during the Great Depression—Barmore is Monroe High School Class of '34—when collapsing milk prices had farmers dumping milk at the side of the road because it wasn't worth selling.
"Things were very bad," he says. "Believe me, it was hell."
He got a job candling eggs for $12 a week, repaired farm machinery, drove a bus in Rockford, found himself in charge of ordering coal for Central Illinois Electric and Gas.
"How many pounds of coal to make a pound of steam, how many pounds of steam to make a kilowatt," he says. "I was figuring that out." Too many other jobs to list.
Businesses are handed down, but his son, Tom, didn't want to make cardboard tubes.
"He's a CPA—he didn't want to go into it," Barmore says. "He was not interested in tubes."
Did that bother him?
"I didn't want to be a farmer, so I figured, if he didn't want to make tubes, that's his business."
But he has a grandson, Keith Shimon, who runs the business now. 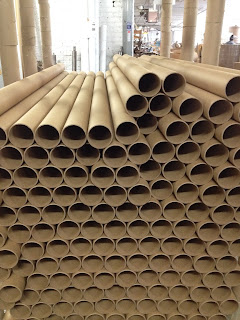 "I thought it would be fun, and it has been fun," says Shimon, 33. "It's been a lot of work, but it's been fun."
Cardboard tubes are a $2 billion to $3 billion industry, according to Kris Garland of the Composite Can and Tube Institute based in Alexandria, Va.
Competition from Asia is slight because of high shipping costs. A cardboard tube is expensive to ship.
"It's kind of like we're shipping air, and the 10-inch tubes really fill up a truck," Shimon says.
Thus, factories tend to be regional suppliers, much in the same way that local potato chip companies have stayed in business because nobody wants to ship potato chips very far.
Technological progress has helped—better machines—and hurt the industry. Architects who once sent their plans in sturdy tubes now hit the send button instead. The American textile trade moving to China also hurt, because there is no need to make centers for bolts of cloth.
Chicago Mailing Tube tries to stay ahead of a changing world by being nimble.
"We pride ourselves in how fast we can react," Shimon says.
"Customers call up today and the trailers go out tomorrow," Barmore says.
Really? I ask.
"Really," he says.


TODAY'S CHUCKLE
I confess, I cooked this one up myself, in tribute to today's special topic. Apologies in advance:
Q. What do you call toothpaste that is dozing at a briefing by former White House Chief of Staff Andrew Card?
A. A Card-bored tube.
—Originally published in the Sun-Times, May 18, 2007
Posted by Neil Steinberg at 12:00 AM