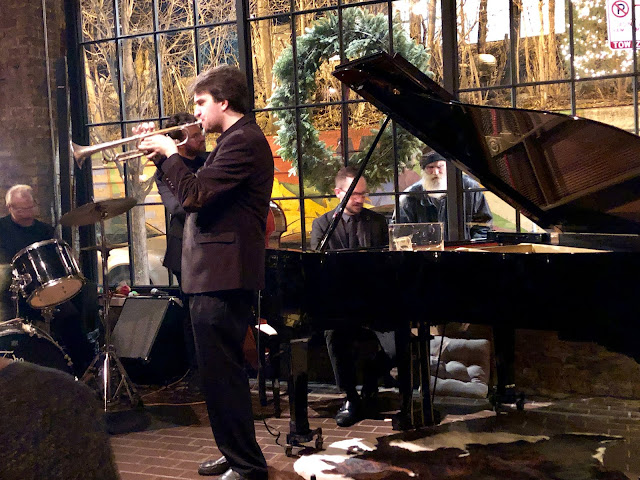 Look at the photo above. What do you see? A jazz quartet, right?
The quartet performing last Saturday consisted of Nickolas Kaplan, on trumpet, Kevin Fort, on piano, John Sutton on bass at Chad Willetts on drums.
But sitting in for a few songs—or rather standing, looking through the window was John Mondlak, the man in the white beard at right. More about him later.
My wife had been talking about going to Le Piano for a long time, the new jazz place that has opened up in East Rogers Park in the old No Exit space, and we crowded into a prime booth—the Frank Sinatra Booth. The place has been open a month.
A few thoughts.
First, it's a lovely space: high ceilinged, inviting, with that wall of windows. Music every night. A $5 cover charge (which I notice people on Yelp still somehow manage to complain about. What do they want it to be, a dollar? Can you even imagine that. The doorman stopping you: "It's a dollar to get in." Yelp, I swear, I should create a Yelp page for Heaven, if it hasn't been done yet. "The Pearly Gates gave off a glowing luminescence that I found unpleasant. And the glissando of harps welcoming the saved into their eternal reward kept me up at night....")
Second, a good vibe. The drummer, Chad Willetts, is also one of the owners, and at one point he made a little speech, and greeted the crowd and led the room into a round of "Happy Birthday" to someone celebrating a birthday. The room was crowded and the service sporadic, but adequate.
Third, the food. We contrived to eat dinner there, ordering the various small plates and trying to assemble them into a meal. I'd advise against that. Drinks and snacks is a more suitable use, at least while the kitchen works out its kinks. The wine was very good, I am told. The charcuterie plate could have used a pot of mustard, or something, though the cheeses were good. The fingerling potatoes were very good, the steak, less so. An $8 (or $5, or whatever it costs) loaf of bread should be better than what was served up. But they just opened, and no doubt are getting the kinks out.
Fourth, returning to Mr. Mondlak—at least that's what I thought his name was. Communication was difficult. I asked him about the music and he mumbled something incoherent. The only word I caught was "Beatles." I asked him if he had anything he wanted to communicate to the public, and he said, "God is love. God is the totality of the universe." Makes as much sense as anything.
East Rogers Park is a gritty area, and there are those who would lump the opening of Le Piano as the dread "gentrification." First, that is premature, judging by the active and highly varied street life passing by.  Second, a right extended to one should be enjoyed by all, and if any random person can show up and lay claim to a piece of real estate and call it home, then the owners of Le Piano should be able to do the same, despite the role of money and mortgages and vigorous effort.
If you didn't see Mr. Mondlak in your initial glimpse of the picture, don't be too hard on yourself. There's a lot of that. When he was at the window, I had a hard time seeing anything else, and eventually went outside to talk with him, or try to. He stood there for a long time, listening, and I can't say I blame him. Chicago has only a few small jazz venues: Andy's downtown, The Green Mill in Uptown. Tough competition, now that I think of them, but Le Piano makes an encouraging start. With the Heartland closing a block away, a reminder that the city grows, changes, moves on, and we change with it.