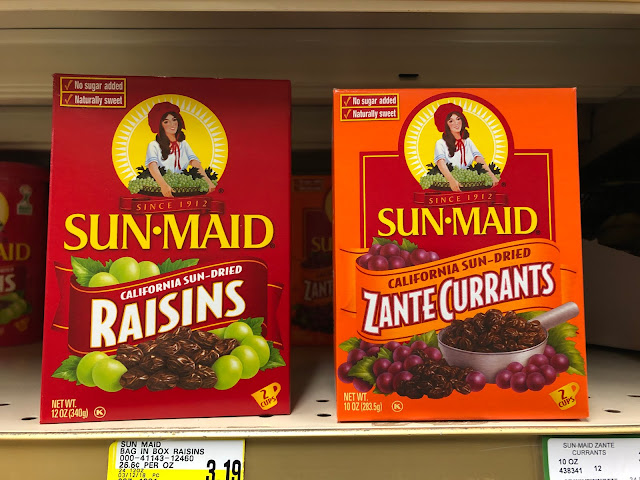 I love, love, love going to the supermarket. Always have, back to the day when my mother and I would visit the two groceries that existed in our world, Pick & Pay or A & P. I was almost an adult before I discovered that you could buy food from a place that didn't have an ampersand in its name.
Back then, the joy was just to hang with my mom and maybe score a black and white cookie at the Hough Bakery at the back of the supermarket. Now I like to study the products. Because you never know what you might find, like the orange box of Zante Currants on the right above.
If you grew up on the things, forgive me. But I had never heard of them, the unfamiliar product made even stranger by the oh-so-familiar Sun-Maid logo. It's like you saw an orange bottle of Heinz Mooshpa. A sauce of some kind,  apparently.
Of course I bought a box. "Tiny, tart and dark to taste," according to the Sun-Maid web page, which says they are made from the Corinth grape. I had heard the term "currant" before, usually describing something found in bakery items, a perception Sun-Maid validates, noting, "For many, they’ve become the preferred delicacy in healthy baked good recipes, like scones, cookies, breads, muffins and rolls."
But "Zante"? That is the true thrill: "A name of one of the Ionian islands, anciently Zacynthus," according to my Oxford English Dictionary. Used in the names of certain products. "Zante wine, wood, etc."
The OED's first citation is from some business publication from 1615, but I knew I could do better, quickly stumbling upon a 1913 publication, compiled by Michael F. Tarpey, called "Levantine Grapes Commercially Known As Currents."

It quotes one Dr. Gustav Eisen, curator of the Academy of Sciences in San Francisco, and an expert on horticulture, who testified that he had "made the Zante current one of the objects of his researches and studies" and that the fruit can be found mentioned in English documents dating back to 1333, as there was "considerable trade carried on between the Venetians and the English in Northern Europe generally in a fruit that was known as the 'raisin of Corinth.'"


A modest publication of only 40 pages, "Levantine Grapes" nevertheless begins more boldly than many novels:

Every discussion of tariff brings up the "Zante currant" question.     The "Zante current," miscalled, is not a currant.     It is a grape. Currants grow on a bush. Grapes grow on vines. The misnamed "Zante currant" is in no sense analogous to the American currant. The misunderstanding arises from a corruption of its French name "Raisin de Corinthe," or Corinthian grape. 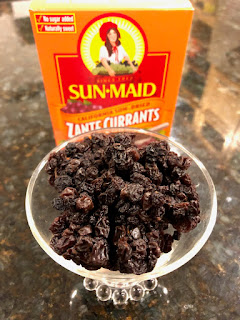 The book was directed at Congress, its purpose, it stated ,was "convincing legislators and the people that this question should be understood and finally settled." Of course money was involved. "Levantine Grapes" worries that reduction in tariffs on Zante currents would pose "a severe, if not mortal, blow to an industry which, as yet wobbly upon its feet, promises to become a prime industry."

They must have won their case: the flood of cheap Greek dried fruit must have been effectively deflected, as the Sun-Maid Zante currants were grown, not in Greece, but California. Honestly, I could plunge deeper into pre-World War I grape tariffs, but I have a sense it's time to wrap up.
Before we leave our topic, I have to point out that the island has a cameo in The Iliad, no less, in Book 2, translated by Robert Fagles:

Next Odysseus led his Cephallenian companies, gallant-hearted fighters, the island men of Ithaca, of Mount Neriton's leafy ridges shimmering in the wind, and men who lived in Corcylia and rugged Aegilips, men who held Zacynthus and men who dwelled near Samos...

See why I love shopping? One second you are weighing grapefruit in your hand to see if it's juicy enough to merit buying. The next you catch the faintest echo of an early 20th century trade tussle then, better, a clank of bronze, a whiff of sea salt, carried across the globe and the ages by tiny grapes that might not have dried in the Ionian sun, but are the descendent of fruit that once did.