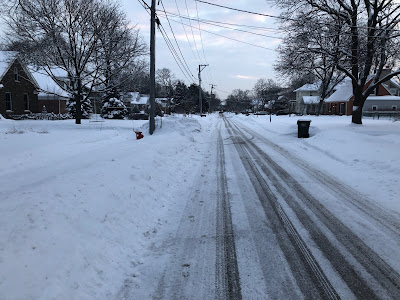 It was 7 degrees out Friday morning when I went to walk the dog.
"It's still cold outside!" my wife cautioned me, from the warmth of our bed.
Yes, yes, dear, I said, nevertheless refraining from putting on the ski pants I had worn for the past half dozen dog walks. Or the glove liners. Or the scarf wrapped around my face. Or the shop goggles.
Seven degrees. Not much. But 29 more than the day before.
I clipped the dog to her leash and we left the house. Outside and it was ... nice. It felt pleasant. Walking down the street, smiling, I thought of an old tale, that goes like this:

A young husband living in a small studio in Wicker Park goes to see his rabbi with a problem...
(Yes, traditionally these stories take place in a nameless village in Poland. But times change, and I try to keep up).
"Rabbi," the young man says. "My apartment is so small. And now with the baby, it is even smaller. Life is unbearable. What should I do?"
"Do you have a chicken?" the rabbi says.  Of course, the young man says, I have a chicken, out in its chicken coop in the alley.
(Okay, these traditional Jewish folktales do not translate that well to modern American life, but bear with me).
"Bring the chicken in the house with you," the rabbi says.
The young man does so. The next day he returns.
"Rabbi, I did what you told me to do, and brought the chicken in. But now it's even worse. The chicken is flapping, feathers flying, the baby howling, my wife complaining. With all due respect, this was not a solution to my problem."
"Wait," the rabbi said. "Do you have a goat?"
The man admits that he has a goat.
"Bring the goat into the apartment."
You see where this is going. It makes a good camp story. You can add as many animals as you like: a donkey, a cow, a horse, though those last two wouldn't really belong to a poor man. You can be descriptive, with the flapping chicken and the braying mule and the chomping goat. The poor young man, desperate now, returns to the rabbi. "Please, rabbi, this is madness!" the man says, at his wit's end.
"Fine," smiles the rabbi. "Now take them all out of the house."
The story ends the next day as the man returns, grateful, and thanks the rabbi for the miracle he has rendered. Without the animals, the apartment no longer seems small.

The story is about relativity. Twenty below was really cold. Dangerously, painfully cold. Seven, on any other day, would be bleepin' cold. But after 20 below, it felt balmy. Here's the interesting thing. Later in the day it was 20 degrees above zero. And that felt fine, but not as nice as it had Friday morning. And Saturday it was 40. And while that was certainly an improvement, it didn't have the joyous release that 7 degrees had. The closest I can figure is that people adjust after changes. Twenty below seemed miserable for two days, and 7 was a release from misery. Once you have been released from misery—7, 20, 40—you're free, and the rest are just details.