Peering into the hole 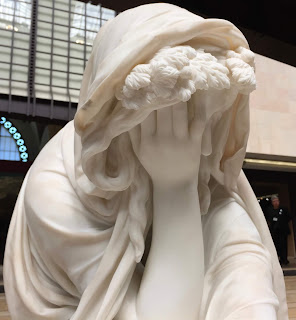 You ever use an outhouse? The kind with the hole, lots of graffiti, maybe a rustic wooden seat? In a national park perhaps?
When you do, after you gird yourself for walking in, and let the door slam, as you position yourself to use the thing, particularly if you are a man and, you know, standing up, do you find yourself, even for a moment, glancing down into the hole, at the odiferous slop within? My guess is you do. It's natural. Even though you already know what's there, and even though looking is not a pleasant experience, you look anyway, just briefly. I won't speculate why.
That's kind of my approach toward the email spam filter. I know what's there. And I generally don't look. Except for those times that I do.
Such as after Monday's column on Michelle Obama's book, "Becoming." The comments, on my blog, on Facebook, in emails, were all of a kind. Some where, "Oh, I read that book, it was wonderful."And others were "Oh, that's quite the recommendation, I must read that." One aspect of reading the book that I couldn't fit into the column was my hope that it would help white Americans understand the black experience, an empathy gap that has existed from our country's founding and still sits like a Grand Canyon of incomprehension, only bigger and ugly.
At the same time, New York Times columnist David Brooks did one of his periodic columns where he balances the left and right, calling for us both to respect each other and meet in the middle and create paradise. He makes some good points, about society and its shifting emphasis, while completely ignoring the glaring imbalance between left and right. Ignoring that while the left has its extremists, the right has an enormous block of hopped-up haters as solid as a granite wall and just as unyielding. Contempt is the ground they walk upon, revulsion the air they breath. I just ignore them, which is a perfect illustration of the difference. They gape in revulsion at the thing they oppose; I go on with my life.
Between the emails and Brooks, a curiosity began to grow, a mere tickle at first, and then I found myself going through the series of clicks, calling up the stygian craphole of my spam filter to sample what is within.
Just a brief glance.


Did Michelle cover in the book how she and her thoughtful, decent husband lost their law licenses? Just asking. Neil, as a shill for the Democrats you are pathetic.  Hey, how does a President become a millionaire? Inquiring minds want to know. Next time skip the bs. Wait then you wouldn’t have a column.

I suppose, in the name of moderation, I could have written him back that the Obamas did not lose their law licenses, that it was just another in the septic stream of lies that the right uses to cramp reality so it reflects their souls.. But what would be the point? It wouldn't affect him in the slightest, certainly, but only waste my time and encourage future communication from someone who already earned a spot in the filter for some forgotten excess.
From Tony Zucchero, under the subject "Moochelle:"


You libtards are still obsessed with this women. We still have to read this bullshit? All those magazine covers she was on for what ? Because she is black? Who cares if she is black or white. You care because all you libtards have is identity politics. You have a beautiful, intelligent current First Lady who speaks 5 different languages as is truly beautiful inside and out and you cannot find one magazine cover or one positive article. Hang on to your identity politics that is one of the many reasons President Donald J. TRUMP will win in a landslide in 2020. #MAGA,#Build the Wall.

So I take it you won’t be reading her book?

For all the good that did.
Had enough? More. Under the heading, "Moochelle" this, from Edward Heinz:

"You two are both alike, you hate Trump and America!!!! SNOWFLAKE"

You get the point. Not to limit ourselves to the spam filter. There were also phone calls, such as this, from my favorite, Robert Glomb. I wish I could convey the sarcasm dripping off his voice. I should probably post a link so you can hear it, but that would take more effort than it's worth. He calls almost every time I write a column. I myself usually don't listen past the first few syllables, the contempt almost strangling the man. But in this case, for the purposes of transcription, I listened the totality of his message, which ran:


Welllllll good morning, Mr. Steinberg, the Trump hater. So you read her book, Michelle Obama, now you think she's sitting on a pedestal. Well , for one, for a person who has to write a book about themselves, put themselves on a pedestal. As far as I'm concerned, that book is fictional. Have a wonderful day. Good bye.

Fictional, the book he hasn't read, I feel safe assuming, and never will read. Which leads us to remember the basic point of what Michelle Obama had done to earn such violent contempt. Do I need to say it? Of course not.