Flashback 1999: It's a life of hard work in hardware business 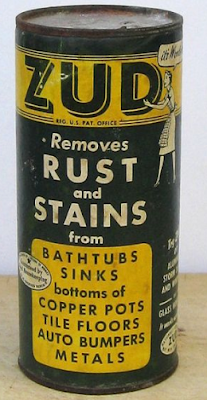 I am on vacation, and will be out-of-the-loop for ... a while.  In the meantime, I hope you don't mind if I disinter a few of my favorite columns of yesteryear that have somehow eluded previous expeditions back into the past. One of the great things about my job is the way you can peer into other people's lives, but sometimes it's heartbreaking to do so.


Sponges. Springs, all different sizes. Bins filled with black nails. Zud Cleaner. Wooden ladders. Spools of chain. Glue. White rubber sink stoppers. Latex gloves. Kleencut shears.
Life hands everybody something different. Michael Mages, it handed a hardware store: Mages Hardware, 3653 Irving Park Road. The same store, under the same tin ceiling, that his father ran for his entire life. The same store, in the same place, that his grandfather opened May 20, 1919: 80 years ago this month.
It is a narrow world, 20 feet across the storefront. Mages began working here as a child of 8 or 9. Now he is 45.
"This is a treasure," he says, by way of greeting, walking across the ancient wooden floor, faded to a dull gray, with a sloping topography of gentle rolling hills and valleys all its own.       "The building was built in 1910. It was a bakery before my grandfather bought it."
Mages is the only employee. His mom keeps the books. He had to let his last part-time worker go — business is that slow. He opens the store at 8:30 a.m. and closes it at 5:30 p.m., six days a week. His main hobby is bowling. Mages belongs to two leagues. His average is 125.
Other men might have rebuffed life's gift. That's what Mages' older brother, Charles, did. He's a big wheel at Motorola.
But Michael Mages never thought of tossing back the cards life dealt him and asking for a fresh hand. He is fighting to keep the store open in an age of hardware giants that can undercut him in price, overwhelm him in selection, outdo him in every category that doesn't involve considerations such as the appeal of oak cases with curved glass fronts, or the tactile sense of having a purchase wrapped up in brown paper and twine, then rung up on a cash register made in 1922, back when they still felt the need to make the metal look like mahogany.
"I always enjoyed being in the hardware business," says Mages, no relation to the sporting goods store tycoon. "It changes every day. One day you're selling hammers. The next day pipe. The next day fixing windows. I like challenges. I liked doing the sales and promotions. They were always successful up to about 1990. Then the big boys came in, and people didn't notice your fliers, and it was harder to make an impact with an individual sale or promotion."
You get the sense that at times the joy fades a little.
"I'm not getting rich doing this," he says. "It's a tough grind. A small store has to struggle."
Mages is always trying. He asked the Irving Park Historical Society to route its housewalk through his store. It declined, for good reason.
To be honest, the store is old, but no Taj Mahal. There is dust. The beautiful cabinets are, for the most part, covered up. The items are not displayed in a particular order, although Mages bristles at that notion.
"There is an order," he says, "I know where everything is."
A sheet of white paper is taped to the wall behind the counter, next to a price list for rock salt (10 pounds: 79 cents). On it are names and dates: Max Mages, 82, born 1881, died Dec. 16, 1963; Sam Mages, 78, born Oct. 30, 1916, died April 15, 1995. And other family members who worked here.
I ask Mages why he has the names posted, and he points out some cryptic numbers and letters by each name.
"Grave locations," he says. "I go to the cemetery."
He still misses his father, who died four years ago.
"We worked well together; we had a system," he says. "If somebody brought in a window to be repaired, I would take out the old window; he would put the new window in."
He brings out a gold-plated Stanley hammer mounted on a plaque.
"At the 75th anniversary he was pretty sick," says Mages. "He was in seventh heaven with this thing. He brought it to show people at the synagogue. He did everything but take it to bed with him. It was the one thing I did in my life for him that he really appreciated."
That last sentence hanging in the air, I ask why he does it. The relatives worked hard, but they're gone. He could earn more elsewhere.
"It's hard to explain," Mages says. "I feel for my father and my grandfather, trying to make it, having a dickens of a time. This is their store. The product of their sweat."
Does he ever regret his choice. He might have seen the world.
"Are you kidding?" he says. "I don't care about that. You might travel around the world. But you almost always end up back in the same place."
It is a place where he is at least appreciated. Art Staniec, a funeral director from Holenbach Funeral Home, walks in and buys $ 6.72 worth of steel wool. I ask him how long he's been coming here.
"Forever," he says. "We prefer dealing with a family business. That's what we are. I don't mind paying a little bit more to Mike. If we don't support each other we're all going to be screwed."
Wooden clothespins made in West Paris, Maine. Deadlocks. Ka-Bar Knives ("A Fistful of Quality"). A Madison Maid ironing table.
"I really, in my heart, feel that this is a lost treasure," says Mages.
—Originally published May 30, 1999
Posted by Neil Steinberg at 12:00 AM