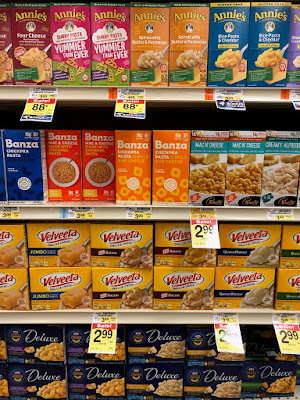 Of course the boys loved Kraft Macaroni & Cheese. Easy, cheap, I would prepare it for them on the stove and maybe leave a few tablespoons for myself in the pot, a guilty pleasure craftily consumed between the stove and the sink while they were focusing on lapping up their dinners.
Lately, Kraft Mac & Cheese has been out, in favor of other, newer, better M & Cs. Over Christmas I was dispatched to Jewel to pick up this Banza stuff—it has lots of protein and few carbs, or so I'm told. As often happens, I was dispatched on my mission thinking I was collecting one product and found myself confronting three: these blue, red and orange boxes, containing confusingly similar foodstuffs. I dutifully sent home a photo of my choices, and picked one, but forgot to buy enough. The younger kid plows through it.
Shortly thereafter, I read of the troubles of Heinz Kraft, which lost $15 billion of valuation in one day in late February. The merger of two years earlier hadn't helped, it hurt. Of course it did. Smaller companies always come up the Next Thing, because they can make the nimble, daring choices that behemoths balk at.
It gave me pause, to see our own little private shift, magnified 100 million times and reflected in giant economic doings. We think of there being a separation between our private sphere and the public realm. They feel separate, like fish bowls bobbing in the ocean. But the division is imaginary; the glass isn't there. It's all one big ocean.
Banza was founded five years ago, in the Detroit apartment of Brian Rudolph, who thought, with all this gluten aversion, that pasta could be made with chick peas instead of wheat.  Why Kraft couldn't do that is a mystery. Or, more damningly, not a mystery. They introduced their Mac & Cheese in 1937. Why screw with success? (Spoiler alert: because if you don't, the world changes and you lose).
Sometimes the world changes fast, sometimes slow. We live in a time of fast change—change is one definition of time. In theory. Yet change somehow also seems as somewhere between unexpected and shocking in practice. The bedrock keeps shifting. Small town stores vanished to big chains in malls. Then the chains started to vanish, and the malls themselves. Automobiles—cars!—are beginning to disappear. And now Heinz Kraft is in trouble. I would have bet on Kraft Mac & Cheese lasting through the ages. But who knows? Anything is possible.