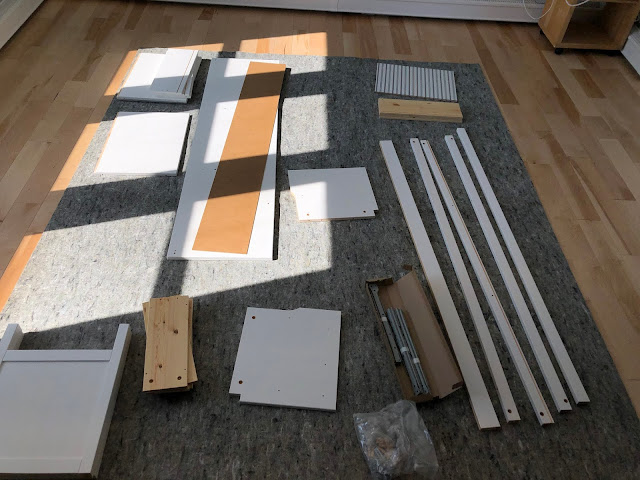 "You're going to have to put it together," my wife said. Which, in married couple code meant, "Can you put it together? Are you capable?" An IKEA console she was considering ordering online.
Last summer we had hired someone to replace the water damaged drywall in what we still call nostalgically "The Toy Room" even though there are no toys there nor boys to play with them. In the fall, we had a maple wooden floor put down (by Chicago Hardwood Floors; the best) and painted the walls a marvelous blue—first slapping swatches of no fewer than seven sample colors (we had originally thought "Yellow!" and it took us a while to get to ("Not yellow!") I had installed a grand's worth of lovely white baseboard covers to replace the hideous beige rusted metal covers in place since the late 1950s. And after risking our lives in six or 10 furniture stores, bought a pair of leather recliners (Electric, which has a drawback. "They seem like medical devices," I noted). And a concrete-colored sofa. Consoles that you don't put together, but purchase at a real furniture store, cost a thousand bucks, or two. This one, the "Hemnes" from IKEA, costs $229. And looked pretty nice, at least online. Real wood. The web site links you directly to Task Rabbit, the chore site, which informed me that someone would come to a house in our Zip code and put it together for $38. But that would involve letting a person in the house, and be a personal failure of handiness on my part. She didn't say that. She didn't have to. I knew.
"Sure,"I said. "I can put it together."
Every bit of cultural static about assembling IKEA products is about how maddeningly complex they are and how confusing the instructions can be. The Internet is alive with web sites like "25 IKEA Assembly Fails" and "Six of the best IKEA furniture assembly fails." That didn't deter me. I figured, by doing it myself, I would be participating in the larger society that I've been cut off from for the past year, not that I ever was much a party of it. Assembling an IKEA console would be time consuming and vexing, but in a culturally-appropriate way, like going to a Bears game. And. wouldn't get cold. Bottom line, I welcomed the distraction.
"It'll be a break from writing stuff," I said.
The console arrived Saturday morning in two flat pack boxes. I threw on a mask, went outside and asked the delivery guys to take them around to the back of the house, where the Toy Room is. I figured I'd give each guy $10 if they did, but didn't say that. The driver looked at me as if I had asked him to dance.
"We're not supposed to take it up the steps," he said, depositing his box at the base of our steps. The second guy put the second box there. They were heavy. With my back in mind, I kinda rolled them up the stairs, using a corner as a fulcrum to pivot each one up. That worked. Inside, I began to tear the boxes apart in our front parlor trying to open them. My wife suggested we keep the boxes intact, the implication being that I'd somehow fail to assemble them and we'd have to return the whole thing in shame. That wasn't happening. I ripped apart the boxes, and my wife and I carried the several dozen oddly shaped wooden pieces down to the Toy Room, plus enough hardware, screws and metal tabs and stuff, to assemble an automobile, in my estimation. In the Toy Room there was a carpet pad waiting for a carpet that was supposed to be delivered yesterday. That made the perfect staging area.
It looked like the photo above.
I poured a cup of Peet's, twisted in my Air Pods, and set to work about 11 a.m.

First I read the instructions. Well, not read, since there were no words. Looked them over, carefully, studying the pieces, the steps. Which is maturity. In the past, I'd just jump in, then later consult the instructions to see what had gone wrong. Not this time. I could see that they make a point of not only showing the builder what pieces to use, but which similar pieces NOT to use. That's smart. And useful.
I assembled the drawers, and was thrown for a momentary loop because the bottoms, with their pre-printed lined liners, were only supported by a groove on two sides, front and back. This seemed a design flaw. Shoddy. They'd bow. I quickly realized that the metal pull assemblies also held the other two sides of the bottoms up. Not a flaw, but clever design. If I had to give one piece of assembly advice I learned Saturday morning, it's this: trust IKEA. They've figured this out. If you think they're wrong, they're not. It's just you haven't figured out their logic yet. It's there, waiting.
I worked steadily away, finished the three drawers. It wasn't unpleasant, but almost athletic, a kind of IKEA yoga, standing over the parts, stretching, reaching, holding, pounding dowels with a rubber mallet, lining parts up.
At 12:37 p.m. I broke for lunch, checked the sterile and pointless online work, then returned about 1:20 p.m. I was glad to get back at it. It was like a hobby that requires focus, like building a ship in a bottle.
Maybe the chore gods were with me Saturday. Typically, my wife shows up at the precise instant when I've messed something up, as if my brain sends out a silent alarm and she hears it and comes running to witness the disaster aborning. Which usually makes it worse, looking up as the sickening oh-I've-botched-this realization hits to see my wife vectoring into the room smiling brightly with misplaced confidence in me, here to certify my shame. But now the several times she checked in were all at the exact right moment when I could use a second person—the instructions say you need two—to hold something, or consult over a puzzling glyph, or look for my screwdriver, which I had a tendency to put down and lose. 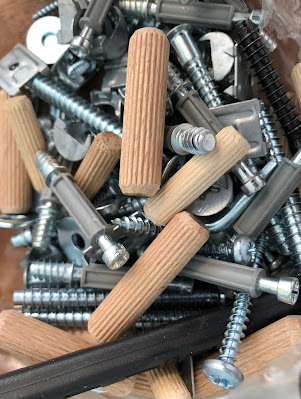 We can cut to the chase. Just because I found it pleasant to go through the many steps to put together an IKEA console doesn't mean it's something interesting to read about. I lack the skill to do that, or at least the inclination to try. So I get it done, and flip the console over, and the thing looks wonderful. The wood stained, not painted. Real wood, not particleboard. The black knobs are less than ideal, but I only had that thought because my wife, in her due diligence before buying it, saw the hint online to class up the piece by buying higher grade festive porcelain knobs and replacing them. We plan to do that.
After admiring it for five seconds, I did notice something amiss. The right side was projecting a millimeter or two from under the top, showing the slightest strip of beige unstained wood. I looked at its counterpart on the left side, and saw that it is tucked under the top, as you'd expect. I must not have pushed the right side all the way in during the initial stages of construction,. My wife saw it too.
"Is that going to bother you?" she said, knowing my OCD way of being tormented by that kind of thing, and anticipating I might immediately tear the thing apart and begin again. Which I did consider. But then I looked at the physiognomy of the piece, which remember I had just constructed, and thus had not only a certain investment in, but knowledge of. Acting intuitively, I took the heel of my right hand, drew it back, and drove it as hard as I could against the part that was jutting out from under the top. It shifted perfectly into place.
"There," I said.
We moved it into its position against the wall. When I dragged the boxes to the recycling, I made a point to see where the Hemnes came from. Any guesses? Not the United States—my wife's guess. Not Sweden—where IKEA is based. Not Canada, source of a lot of furniture.
Anybody?
Russia. 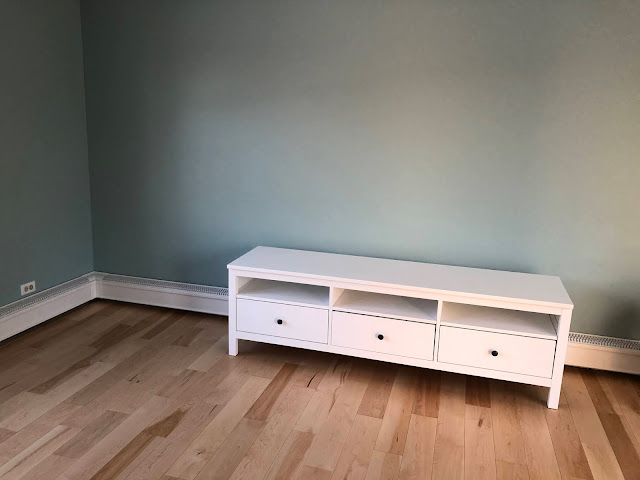