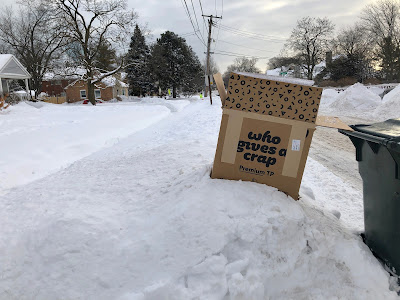 Now "crap" is an interesting word. Anglo-Saxon, I guessed, upon seeing this carton from Who Gives a Crap brand toilet paper left out for our delayed trash day Wednesday in would-be tony Northbrook.
I was not particularly surprised to see the moderate oath being introduced by toilet tissue makers. Even mainstream paper mills have gotten bold lately, with their pudgy bears and angel babies growing more, ah, specific. What's the line? "Enjoy the go." In your dreams, Charmin.
I should say, I'm not offended by the more direct advertising for toilet paper. Like most marketing, it veers from annoying to forgettable. But as someone who has tied his business wagon, so to speak, to a mild oath with everygoddamnday.com, I was interested to see an actual company assume a curse word moniker.
The company, which we'll call WGAC for brevity, was started by three young men in 2010 who are interested in worldwide sanitation, according to their smart who-we-are video that raised $66,000 on Indiegogo. I always assume that protestations of noble intent and concern for the world at large are mere corporate puffery, a slick patter to distract consumers while snaking a hand into their pockets. But a banner on WGAC's bright, fun web page announces they've just donated $5.8 million Australian (or $4 million American dollars) to WaterAid.
That's a lot. As is their pledge to donate 50 percent of profits to sanitation and water charity. 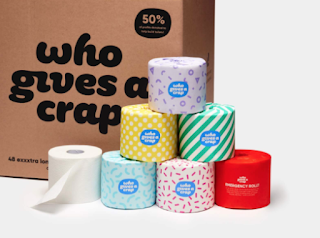 Add to that a consideration that the giant toilet paper companies just blow completely: attractive packaging. Look at the rolls. They're sort of wild and fun, graphically, are they not? The kind of rolls you'd expect in trendy lofts in in Bucktown or ... maybe ... big old farm houses in Northbrook. The lady down the block obviously took the plunge. Maybe we will too. With that in mind, I checked the price: a buck a roll, or about three times what Charmin costs. Ah. We'll have to think about that...
Forgive me for being sidetracked. We were supposed to parse the word "crap." Man, was I off-base with my guess that it was some ancient Teutonic word.
I was worried the Oxford English Dictionary might turn up its nose at "crap" (sorry) the way it hurries past "fuck" without a glance. But it's there, though not at all what I expected.
The Oxford finds its origins obscure or dialect, and begins by suggesting the word is identical with the earlier Dutch krappe and then fires off, without preface or translation, this 1599 string of Latin, 'carptus, carptura, res decerpta, rustum, decerptum siue abscissum, pars abrasa siue abscissa; pars carnis abscissa; crustum; offella, offula; placenta; pulpamentum." which Mr. Google Translate renders semi-helpfully as: ""Nipped by, GATHERING, a plucked, rust, off or cut off a part of the drying out or removed; a part of the flesh is in the abscissa crusts; offella, a snack; cake; meat."
Setting the stage, in a garbled fashion, for the first three definitions of "crap," starting with "1. The husk of grain; chaff," and running through plants and weeds and buckwheat, then residue from rendering or boiling, dregs in beer.
Notice anything missing? Not a word about excrement, beyond it also being something left behind (sorry) which what I thought of as the primary definition of the word. (I don't know why. I'm far more likely to toss away the newspaper with, "I'm so sick of this COVID crap!" than I am to say, "Excuse me Mr. Ambassador, but I've got to step away to take a crap. Continue the discussion without me."
This tendency is reflected in Wentworth and Flexner's "Dictionary of American Slang," which drives home that, despite pretensions, I don't know my own language. They identify crap as taboo, though its first definition is "Nonsense; cant; lies; exaggeration; insincerity; mendacity' bull," traced to the relative yesterday* of 1939. "Pally, I never heard so much crap in such a short time in my life," from John O'Hara's Pal Joey.
They derive the word "from the taboo but otherwise standard 'crap'=feces." then get to "2 Anything inferior, cheap, ugly or insulting by its very presence, sp. merchandise that is of inferior material, workmanship, or overall quality; shit."
Which circles us back to using crap in a product name. Before I checked out Who Gives a Crap's web site, I questioned whether associating any product with the word crap is a wise marketing strategy, even for toilet paper. But that might be my three score years talking. Looking at their presentation, and the actual dollars they've given to world water and sanitation distribution and education, plus the presence of an empty cardboard box on our block as evidence they actually do distribute the stuff, I've decided the name is sharp, effective marketing. Had they called the product, "Hands Around the World Toilet Paper" or some such tripe, my curiosity would never have been piqued. The big Wisconsin mills are so focused on making toilet paper cheap and comfortable, and friendly, they forgot to make it cool. "Who Gives a Crap" does, and while, looking at the name again, we could wonder if there being no question mark at the end is an oversight—Who Gives a Crap?—this has already gone on too long, and we can leave that for my loyal commenters to hash out.
* The dangers of quick-and-easy, on-the-fly etymology. After this was posted, in checking to confirm that the 19th century British toilet maker, Thomas Crapper, has nothing at all to do with the development of the word, I found this, from Hotten’s 1859 "A Dictionary of Modern Slang, Cant, and Vulgar Words: “CRAP, to ease oneself, to evacuate.”