And a Snickers bar has 70 calories... 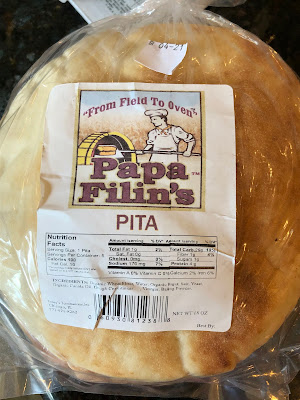 "The eagle does not hunt flies," the great Samuel Johnson once said, an edict that Mike Royko recast as, "Never shoot a flea with a bazooka."
Words to live by. Even after years of decline, the newspaper, or even this little blog, is a soapbox, a megaphone and a responsibility. Thus, for instance, I tend not to use the names of readers who write in saying vindictive, stupid things, to shield them from the embarrassment they're too thick to perceive. Be kind even if others aren't.
Certain businesses, too, are small enough and marginal enough that to hold them to professional standards is almost cruel. I've had some pretty watery lemonade at the lemonade stand of some tot. I'm not calling out the proprietor though. To what end?
So I thought to let this go. But there is a larger point here. I had a taste for hummus and pita a few days back, and bought a container of always excellent Cedar's hummus, and a bag of Papa Filin's Pita,  a brand produced by Biondillo's Bakery, 4900 W. Division in Chicago.
I watch my weight, so check calories and portions. The pita I took out of the bag weighed 4.1 ounces, and was pegged as 100 calories on the nutritional information label, which is impossible. More like 300 calories, easily. I cut the pita in half and recorded that as 150 calories. Still, three times the probable figure. Quite an error, really. If it was an error. 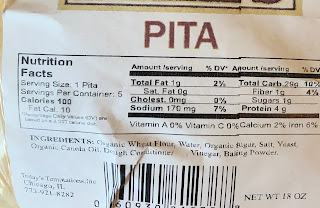 Later, I phoned the bakery, but the owner never returned my call. Silence is often the strategy of the guilty. Papa Filin's are sold not only at Sunset, but at Jewel and Mariano's, and you'd think even if the bakery doesn't care, the stores might care a little about such wildly inaccurate packaging appearing on their shelves. Apparently not. At least not yet. They can't say they weren't told.
The moral of the story is: you have to think for yourself. I could see somebody biting into a dense, delicious Papa Filin's pita and thinking, "Only 100 calories? Hoo-boy, bar the door Katie. I'm eating two of these." Or about 600 calories worth. What is too good to be true usually is just that. Let the buyer beware.