'Stay close to the orchestra' 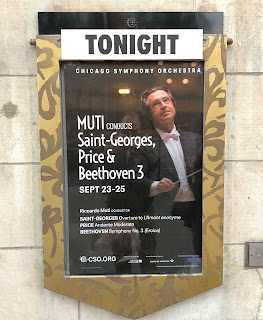 "Tonight of course is a very special occasion," conductor Riccardo Muti said Thursday night, standing on stage at Symphony Center, the assembled Chicago Symphony Orchestra behind him, the long absent audience in front. "After 19, 20 months of separation, of disaster in the world, so many people killed, we've almost forgotten: lack of culture can damage society."
It can? I suppose so. Though with all the other harmful factors, the continuing plague and corrosive politics, the rising chorus of lies and entrenched delusion, with all the vigorous partisan structural vandalism being inflicted upon our country, I'm not sure how far down the list of harm the loss of classical concerts should be placed. Does it even register? I suppose it must. Music is in some ways the most essential thing, in that it offers us an abundance of harmony, grace and perfection in short supply anywhere else. Maybe music calls us to our highest selves.
"Culture is not entertainment," Muti said. "You did not come tonight because you did not know how to spend your evening. You're here because you needed to hear music."
I can hear music wherever and whenever I like, with a flick of the thumb. What I needed, very badly, was to go somewhere. A functioning orchestra has long been the hallmark of any great city. The CSO starting up again means something, if only a determined show of normality as we try to beat back this COVID epidemic that just will not go away.
Muti asked the audience to consider the musicians, how they have endured and kept themselves in world class form over a year and a half of lockdown.
"That is the reason I am playing 'Eroica'" he said, referring to the third piece on the program, Beethoven's "Symphony No. 3 in E-flat Major, Op. 55." The Sinfonia Eroica, or "heroic symphony," supposedly named for Napoleon, then yanked back when the little corporal crowned himself emperor (something for us to look forward to, perhaps).
"They have been heroic. .. they couldn't communicate the real reason of their life, to give the public beauty."
Now they can.
He pointed out that the first two composers on tonight's program—Joseph Bologne, Chevalier de Saint-Georges, and Florence Price—are both Black. Saint-Georges a contemporary of Mozart (the two lived together briefly). Price was a Chicagoan who work was featured at the 1933 Century of Progress Fair. In 2009, new music of hers was found in a run down house in Kankakee County. Quite the story, really.
"It shows culture is open to everybody," Muti said. In theory, yes. Still an overwhelmingly white audience at Symphony Center. Neither Saint-Georges nor Price were geniuses—his "Overture to L'Amant anonyme," his only extant opera, was pleasant baroque fodder, Maybe his other five operas were better, but they were lost in the span of time. Price's "Andante moderato" struck me as something you'd hear on a 1940s movie soundtrack, vaguely Southern (she was born in Arkansas). But then I am not a classical music critic, and if you want the performance assessed by someone know knows what they're talking about, you can read the Sun-Times review.
Muti's point is taken, about the desire for openness telegraphed by featuring those two composers (I'm tempted to lump in the third, Beethoven, just to be a wise-ass. There have been several attempts over the years to argue that the composer was Black, but those are more arguments made for rhetorical impact than anything based on empirical evidence)  Two out of three ain't bad, and it takes a long time to turn the ship of society. Before people feel welcome at a place, the place first has to welcome them. Sometimes for a long while. Across the street, the Art Institute is going large for textual artist Barbara Kruger, splaying her work across the building's facade, even on the walls outside. That doesn't make women suddenly well-represented at major museums, but is another step in the right direction. Her show is certainly engaging, and taken along with the recent exhibit of Bisa Butler's wildly colorful quilted portraits, you can't help but think that the two mainstays of Chicago's cultural life are hitting the ground running in the post George Floyd, post COVID (please God) era.
Muti surprised me by pleading with the audience to spread the word about this orchestra thing.
"Where most of the world will become more and more savage, I am asking you to stay close to the orchestra," he said.
Okay, maestro, that sounds like a plan.